Skip to content
Home/Molecular therapy and surgery combined in GIST

For most cancers, the combined use of multiple different types of therapy is the most effective approach. Over the last several years, we have applied this philosophy to GIST. In this article, I will review our current understanding of multimodality therapy for both primary GIST and metastatic GIST. The gold standard of therapy for primary GIST is surgery. However, despite complete removal of all visible disease, as many as half of patients will develop tumor recurrence. We at Memorial Sloan-Kettering Cancer Center (MSKCC), and others, have found that the likelihood of recurrence depends on several features of the tumor. As with many tumors, size predicts outcome. Patients with tumor size greater than ten centimeters do not do as well as those with smaller tumors. Tumor location is also important. Patients with GIST that arises in the stomach fare better than those with small intestine GIST. The dominant predictor of recurrence is mitotic rate (the number of dividing tumor cells that the pathologist sees per 50 microscopic fields). Patients with a mitotic rate of less than five have approximately a 20 percent chance of recurrence by five years after surgery compared to an 80 percent chance for those with a higher mitotic rate. The relationship of mutation to recurrence after removal of a primary GIST requires further study. However, it appears that patients with exon 11 point mutations or insertions do better than those with KIT exon 11 deletions or a KIT exon 9 mutation. It should be stressed that all these indicators of recurrence have been established in patients who underwent surgery alone and were never treated with imatinib or other tyrosine kinase inhibitors (TKIs) unless they developed recurrence. Risk factors for recurrence may be different in patients who are treated immediately after surgery with TKIs.

To determine whether taking imatinib after removal of a primary GIST can decrease the chances of tumor recurrence, we conducted a phase III clinical trial known as ACOSOG Z9001. In this multicenter trial, patients who had complete removal of a primary GIST were randomized to one year of imatinib (400 mg/day) or one year of placebo. Over 650 patients were enrolled. The trial was stopped prematurely in April 2007 based on the difference in tumor recurrence between the two treatment groups. As outlined in a National Cancer Institute (NCI) press release in April 2007, the chance at one year of developing a recurrence was three percent in the imatinib-treated patients versus 17 percent in the placebo-treated patients. Final analysis of the data is pending and then treatment recommendations will be made. There are several other large trials testing the benefit of adjuvant imatinib. One is led by the Scandinavian Sarcoma Group and is examining one versus three years of adjuvant (i.e., post-operative) imatinib. Another is a European Organization for Research and Treatment of Cancer (EORTC) trial comparing no treatment to two years of imatinib; the goal of this trial is to determine whether overall survival is different. We will not know the results of these trials for at least several years. 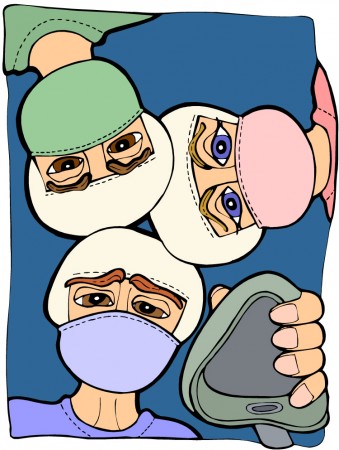 development of drug resistance, which occurs in half of patients within two years. Consequently, we need new approaches for patients with metastatic GIST. One possibility is that a combination of drugs may prove to be more effective than using one drug alone. This is the case with many other types of cancers. Though another option is to consider using TKIs in combination with surgery for metastatic GIST.

The use of surgery in patients with metastatic GIST who are being treated with TKIs is investigational. The idea is to remove all visible disease whenever possible. This may result in delaying, or possibly even preventing, the development of drug resistance. The hypothesis is that an individual’s chance of developing resistance is proportional to the amount of tumor that remains after TKI therapy. MSKCC, and several other centers around the world, has utilized surgery in addition to TKIs in selected patients with metastatic GIST.

We have learned that surgery is generally not useful for patients who have multiple tumors that have become resistant to imatinib. If one tumor is resistant, surgery may provide benefit. Patients with non-progressing metastatic GIST have done well with complete tumor resection. However, these are highly selected patients. It is also important to understand that there is risk of complications and even death in performing surgery in these patients who otherwise may have lived several more years on TKIs alone. We need better tools to predict drug resistance to select who should undergo surgery. The only way to prove convincingly that surgery should be used for metastatic GIST is to conduct a scientific clinical trial in which patients are randomized to continue TKI therapy alone or to undergo surgery and then resume TKI therapy. Such a trial is being considered in this country. We have learned a lot about GIST in the past decade. While surgery is the best therapy for primary GIST and TKIs are the best therapy for metastatic GIST, the optimal multimodality treatment for GIST is yet to be defined. Already, we have discovered that adjuvant imatinib is beneficial in primary GIST and now it is important to define which patients should be treated and for how long. There is certainly theoretical value of surgery, in addition to TKI therapy for metastatic GIST and this area requires further study.