Researchers at Memorial Sloan-Kettering Cancer Center (MSKCC) in New York have found a rare mutation in some GIST tumors. In a 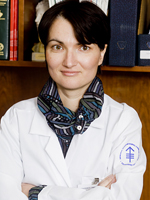 series of 61 patients with wild-type GIST, they found that three of them (5%) had mutations in a gene called BRAF. This same mutation, a “V600E” mutation in exon 15 of the BRAF gene, occurs frequently in melanoma. They also found the same mutation in one of 28 GIST patients that were resistant to Gleevec.

The research team was headed by Dr. Cristina Antonescu, one of the members of the Life Raft Group Research team. The results of this study were reported in the July issue of Genes, Chromosomes & Cancer. Dr. Narasimhan Agaram was the lead author of the paper.

In 2003 researches found the driving force in about one-third of these wildtype GISTs to be mutations in the PDGFRA gene. This discovery was a result of a collaborative effort between Drs. Jonathan Fletcher of Brigham & Women’s Hospital, George Demetri of Dana-Farber Cancer Institute and Drs. Michael Heinrich and Christopher Corless of Oregon Heath and Science University. Dr. Hirota also reported PDGFRA mutations at roughly the same time.

This left about 12 to 15 percent of adult GISTs where the mutation/driving force was still unknown. In 2005, Dr. Antonescu and her lab discovered that several genes were overexpressed in pediatric GIST, including the IGF-1R gene. The majority of pediatric GISTs are wild-type GISTs. The finding of overexpression of IGF-1R was verified and extended to adults with wild-type GIST by Dr. Andrew Godwin of Fox Chase Cancer Center in 2008.

The three BRAF mutations found in the 61 wild-type patients that had never taken Gleevec had some similar characteristics. All three patients were middleaged females (49 to 55 years old) with primary tumors located in the small bowel. In contrast, in five young adults (over 18 but less than 30 years old) and 15 pediatric patients (less than 18), no BRAF mutations were found.

In addition to the BRAF mutations found in wild-type GIST patients, the MSK team found an identical BRAF mutation in a patient with secondary resistance to Gleevec. The team looked at 28 tumors from 26 Gleevec-resistant patients that lacked an identifiable mechanism of resistance. The patient with the BRAF secondary mutation was a 66 year old male whose primary tumor was in the stomach and had a PDGFRA exon 18 mutation (4 amino acid deletion 842-845).

BRAF is a “downstream” protein that is activated by many receptors including KIT. In melanoma, it is mutated about 50 percent of the time. A clinically available drug, Nexavar (sorafenib), has undergone clinical trials in melanoma. Nexavar inhibits several different targets including BRAF, KIT, VEGFRs, CRAF and PDGRFB. Even though Nexavar has in-vitro activity against the common V600E BRAF mutation, it has shown little activity against melanoma in clinical trials. The reason for this is still unclear. Is it because Nexavar is unable to inhibit BRAF sufficiently or because there is another important melanoma target that is not inhibited by Nexavar?

Even though the clinical activity of Nexavar against BRAF mutations remains somewhat unclear, it has shown potent activity against other relevant targets including mutant KIT (especially the exon 14 T670I “gatekeeper” secondary mutation) and wild-type KIT. Nexavar is in phase II trials for GISTs that are resistant to Gleevec and Sutent. Other more potent BRAF inhibitors are in development.

In the GIST patients with BRAF mutations, several questions remain to be answered. Is KIT still activated and/or important? Which is more important, the BRAF mutation or KIT activation? Will inhibition of BRAF be sufficient for a response or will inhibition of BRAF and KIT be needed? Given the rarity of this mutation, these answers may be hard to come by. Another question that remains is when or if mutational testing will be recommended for select GIST patients.