It was suggested three years ago that the annual meeting of the Contactgroep GIST/Life Raft Group Netherlands/Belgium should be held on a boat i.e. the so-called “Life Raft”. Well, for the five-year jubilee meeting of the group, held on October 4, 2008, this is exactly what happened. The boat was moored at Tolkamer on the river Rhine, right on the border with Germany, where the Rhine enters Holland.

About 120 people assembled for the meeting: patients, caregivers, speakers, committee members, representatives from Novartis (Pfizer could not attend as they had their own meeting that weekend) and last but not least, the chairman and director of the Dutch Federation of Cancer Patient Groups (NFK), Ms. Anemone Bögels and Dr. Mrs. Els Borst-Eilers, a former Health Minister in the Netherlands.

The morning consisted of a coffee reception and the speaker of the day, Prof. Dr. 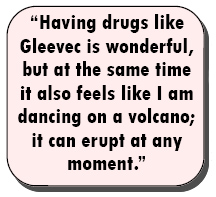 Winette van de Graaf, one of the leading GIST experts in the Netherlands and professor of Translational Medical Oncology at the Radboud University Nijmegen Medical Center.

Her lecture was called “To Be a Guest Alongside GIST” and highlighted various new developments in the treatment of GIST, in particular some proposed clinical trials in the Netherlands. She made a telling remark when she mentioned the ambivalent feelings her GIST patients often express, “Having drugs like Gleevec is wonderful, but at the same time it also feels like I am dancing on a volcano; it can erupt at any moment.”

The “The Count of Bylant” stayed moored for the morning session, which gave everybody plenty of chances to see and experience how busy this stretch of the river Rhine is. But after a very good lunch, and group photograph, it was anchors away and off downriver to the town of Arnhem. It was a lovely trip with beautiful views of the shores of the river. In Arnhem, we turned at the site of “A Bridge Too Far”, back towards Tolkamer. It made for a very relaxed afternoon, where there were more chances for attendees to mingle, interact, renew acquaintances and make new ones. The only official bit of the afternoon was the presentation of the Committee Report, whereby Edwin van Ouwerkerk Moria, Chairman of the Meeting, outlined the challenges facing the present committee, especially since the group has grown from a small group of enthusiasts in 2003, to the official Contactgroep GIST of today.

There are about 150 members and we are still growing. But it is still a small patient group and that makes it very difficult to find enough volunteers to join the committee or do tasks such as the newsletter or organizing the annual meeting.

This problem was immediately illustrated by the fact that three of the founder committee members have decided to step down at the end of 2008. This is in addition to the already vacant post of chairman since September 2007. Fortunately a new chairman has

been found; Jack Asselbergs will take over in 2009. Other committee members will hopefully be found in the next few months. The group has also engaged a professional coach, who will hopefully be able to help to ensure the future of the group. It has already become clear that priorities have to be set and that may mean a different way of carrying out certain tasks, such as secretarial and financial ones.

But it is not all doom and gloom for sure. All of the attendees enjoyed the meeting, which was apparent by the enthusiastic farewells to each other, promises of mail contact, meeting up and keeping in touch. The organizers can look back on another successful annual meeting. Again it was proved that personal contact is very important to members and much appreciated.

But next year we will probably not be on a boat… Or so I think! 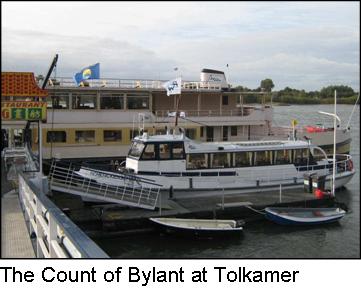