Skip to content
Home/Kate Poss meets her mark…and then some!

Kate Poss meets her mark…and then some!

Now all she had to do was run the 26- mile marathon! 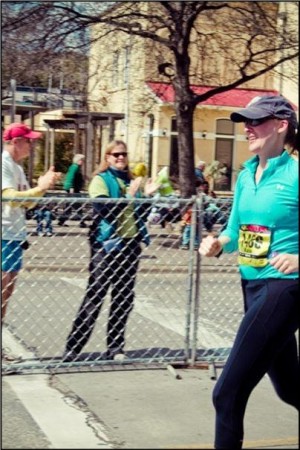 With determination and a whole lot of spirit, Kate pushed through it and finished the race.

The question then remained, “How does it feel, now that it’s over?”

Kate was doing all this in honor of her dad, John Poss. John was diagnosed with GIST in 2000 and sits on the LRG Board of Directors. “For months, it was the main thing I was focusing on. I thought the fundraising would be the hardest part but it wasn’t.”

Kate tried not to be shy and reached out to a large range of people for this campaign. While most of her supporters knew the Poss family, many donations came from business and casual acquaintances, filling Kate with an overwhelming sense of pride.

“I was hesitant when I made my list. Then I realized that the worst they could do was delete the email.”

For Kate and the LRG, that risk paid off.

But if fundraising wasn’t the hardest part, what was? Well, the training of course.

Juggling her training with her demanding job in TV and film production and a holiday season filled with goodies was a handful.

“Trying to fit it in with my work schedule was the hardest part, sometimes I was too tired to train but I had to keep going.” 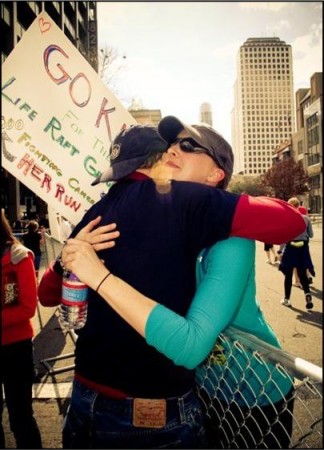 But there was an even harder part of the process that Kate didn’t see coming, “Writing down my dad’s story for the first time, and other’s reading it, made me realize what a miracle it all was.”

That realization motivated her to succeed, despite any difficulty she might have faced, “Don’t ever give up. My father was told to give up and he didn’t.”

After a cantaloupe-sized tumor was discovered on his stomach, John was told to go home to die.

But after talking his way into an early Gleevec trial, John’s tumor shrank. Ten years later, he is still going strong.

And when Kate Poss finished that last pesky .2 of a mile? John was waiting for her with a big sign, a big smile and a bigger hug.