Here in New Jersey, home to the Life Raft Group HQ, we’ve had a strange run of bad luck. First, there was an earthquake, quickly followed by Hurricane Irene.

We boarded our windows, emptied our yards, stocked up on water and ice and prepared for the worst.

I, for one, was not prepared when the worst came, not in the form of property damage, but in the loss of a friend.

Like many others, I sat at my computer in the midst of a storm, deaf to the world around me. Richard Palmer was not just a member of the LRG; he was a mentor and a friend.

This is not an obituary you’ll be reading because I believe that Richard will never truly leave us. This is a celebration of his life, which lives on in the memories of his family and friends, done the best way I know to honor him—on paper.

Richard was a newspaper man and bounced around his home state of California writing for papers like the San Luis Obispo County-serving Tribune & El Morro’s Sun Bulletin.

He met and married his wife, his “bride”, Linda in 1976 and within three years, they had welcomed Rebecca & Matt.

But soon the surf called to him. Richard had longed to go to Hawaii since the 80s but his home and his life was in California.

“He said that the only way he would ever leave [the Sun Bulletin] was for ‘more money and Hawaii,’” said long-time GISTer and fellow LRG member, Tom Overley, “Then, one day he got the call…the rest is GISTory.”

Richard knew a woman who worked at the Hawaii Tribune Herald on the Hilo side of the Big Island and told her if ever a spot were to open up, he’d be ready. Wasn’t he surprised when she called and said he could have her job? With Rebecca recently married and Matt off on his own, it was perfect timing.

“It was a courageous move,” says Tom, “but Richard and Linda were courageous people.” 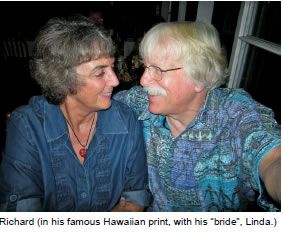 “We had a good run in Hawaii,” muses his beautiful bride, Linda.

Indeed, Hawaii seemed to love Richard and Richard loved Hawaii. In fact, he treated it as a tool for healing.

After one of Tom’s GIST-related surgeries, Richard wrote to him and said, “I know just the beach where the trade winds off the Pacific cool the tropical temperature, and the Wahine practice the hula while the boys surf and the snorkelers ogle at brightly colored fish and coral inside the reef. We’ll get you one of those umbrella drinks and filter that into your bladder, buddy bag.”

Richard was like that. He used his gifts for writing and humor to engage and support his friends and loved ones.

“He was so easy to talk to and so funny,” recalls Linda.

Friend and colleague, Bill Morem, of The Tribune noted in a recent article about Richard, “Those who were fortunate enough to have come within his orbit — whether through friendship, family, church or journalism — were rewarded with a generosity of humor and spirit tempered by an unerring moral compass that he used wisely and well in comforting the afflicted and afflicting the comfortable.”

When Richard was diagnosed with GIST (then LMS) in 2000, he quickly hooked up with a group of people in the early STI-571 trials on an email list hosted by the Association of Cancer Online Resources (ACOR). This group would later become the Life Raft Group, and Richard its newsletter editor.

The early years of GIST and Gleevec were scary and unpredictable times. Everything was new and changing. You would think that being diagnosed with GIST in 2000 would steal some of Richard’s humor and light away, but it didn’t.

He summed up his philosophy of living with cancer once when he told Tom, “Sounds like life is good if you just ignore the cancer part. So focus on the good, and keep the bad in perspective.”

Richard tried to spread this philosophy to everyone he came in contact with.

Linda was quick to point out, “Everybody who ever met Richard loved him.”

Bill’s theory on Richard’s enthusiasm and impact on the world is laid firmly at his family’s doorstep, “His life and the exuberance of that life, even during his cancer battle, was most likely formed and burnished by the love of his wife, Linda, and his two children, Becky and Matt. His grandchildren — Camden, Logan and Luke — only deepened his embrace of life.”

Richard always believed that it was hard to feel down on yourself and life when you had such a wonderful “bride” and caregiver in your life, as he had with Linda.

Married for 35 years, Linda & Richard’s love never wavered, “It just got better and better over the years. I hope other people can find what he had.”

In recent days, that is what Linda holds onto the most, the love…and the laughter.

“His goal, every day, was to make me laugh,” she says.

And anyone who knew Richard knows that the man with the smiling face and quirky sense of humor never had any trouble with that.

In his article, Bill wrote, “Richard was the kind of person who was so full of life, integrity and well-honed professional skills that, regardless of the situation, when he showed up on the scene, people would think or say: All right, Richard’s here.”

“What can I say of this man whose path ran parallel with mine?” Tom asks, “We shared a disease, a drive, a love for and respect of life. We shared friends. We said good bye to long time GISTers and we sat before the same candles but 4,500 miles apart.”

“He was the Kahoona,” he declares, “A tremendous friend who I never had the pleasure to meet in person but with whom I felt a certain brotherhood.

Bill is wistful, “Richard…as long as those who knew you draw a breath, your life and story will live on. And if we listen real closely in our quiet times of reflection and introspection, perhaps we’ll hear those on the Other Side saying: All right, Richard’s here.”

As for all of us who are so much better for having Richard in our lives, Linda has this to say, “He was irreplaceable and we’ll miss him forever, but please keep Richard in your hearts.”

If you would like to read the rest of Bill Morem’s tribute to Richard go to http://www.sanluisobispo.com/2011/08/30/1736323/richard-you-will-be-sorely-missed.html 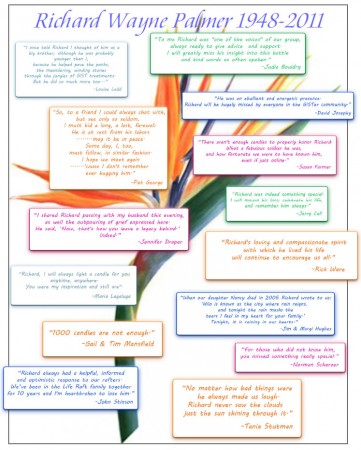