The 2011 Connective Tissue Oncology Society (CTOS) conference was held in late October this year in Chicago. If the meeting had a GIST theme it would have been “imatinib and surgery.” The LRG was honored to both present a poster and conduct a presentation, both of which were very well received.

A French team led by Dr. Florence Duffaud showed that primary tumors in the duodenum (between the stomach and small intestine) can be removed with a number of procedures and that patients have a reasonably favorable prognosis (64.6% event-free survival at four years). Neo-adjuvant imatinib is also recommended to shrink duodenal GISTS and reduce the need for a Whipple, the most complex procedure, which affects multiple organs including the stomach, duodenum, gall bladder and pancreas.

Another team from the Netherlands showed that neo-adjuvant imatinib seems to improve the chance of sphincter preserving resection (55% with neoadjuvant versus 33% without) and disease-free survival in patients with a GIST of the rectum.

A poster by authors in Poland led by Dr. Piotr Rutkowski of Sklodowska- Curie Memorial Cancer Center and Institute of Oncology in Warsaw analyzed 46 patients who had neo-adjuvant imatinib. Five-year overall survival was significantly high (89%) in this cohort. The authors suggest that use of neoadjuvant imatinib may avoid mutilating surgery, decrease risk of tumor rupture and decrease morbidity after surgery.

Dr. Sebastian Bauer at the University of Essen in Essen, Germany (and a member of the LRG Research Team) presented results of a review of 239 advanced GIST patients who had surgery to remove a GIST metastases (called a metastasectomy). Dr. Bauer’s data showed five factors that correlated with improved survival:

 R0/R1 resection in which all visible tumor is removed ( compared with incomplete resection (R2), also called debulking surgery, which does not seem to prolong survival)

 Status as stable disease or partial response prior to surgery

 Liver metastases versus other locations

The sub-set of patients who were not progressing at surgery and who had R0/ R1 margins had favorable overall survival (OS). The median OS has not yet been reached.

Dr. Bob Benjamin of MD Anderson reviewed data from the S0033 phase III imatinib trial that started in 2001. Of the original 695 patients 180 have survived over eight years and of those 71 remain on imatinib. Dr. Benjamin reported that since 2001 the cost of imatinib has risen by a factor of 2.4, he also noted the hardship of patients on Medicare who are not eligible for Novartis support and who had to purchase drugs required for the trial. He questioned this practice and tasked Novartis to address the price increase. 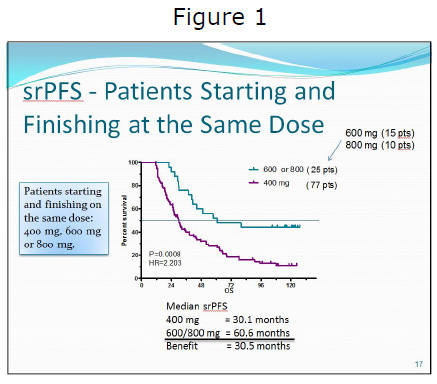 Norman Scherzer, LRG Executive Director, presented data from the Life Raft Group Patient Registry. This was the second time this study has been updated at CTOS, and it was also the subject of an article published in the Journal of Gastrointestinal Cancer in 2009. The LRG’s self-reported data continue to show both a progression-free (PFS) and OS benefit for advanced patients on higher dose (600 mg to 800 mg) of imatinib (See Figure 1). In this update self-reported Progression Free Survival (srPFS) data for patients who did not change dose also showed a highly significant advantage for patients on a 600 mg to 800 mg dose. Patients in this cohort who were on a lower 400 mg dose had 2.2 times the risk of progression. A more detailed description of the study follows.

The study was entitled, “Life Raft Group Registry – long-term (>9 years) correlation of self-reported progressionfree survival and overall survival with imatinib dose in patients with metastatic gastrointestinal stromal tumors.” It looked specifically at the difference between starting dose and actual dose and its impact on both OS and srPFS. Most studies do not take into account the difference between actual and starting dose, and instead classify patients only by starting dose, regardless of whether they changed dose during the study.

Of the initial 169 patients in the study, 77 were female, and 92 male. Patients started taking imatinib between 2000 and 2003. The study was nonrandomized and retrospective, with data coming from the LRG’s Patient Registry. All patients had an initial response of tumor shrinkage while on imatinib, and all patients were on imatinib for at least one year or more, so as to eliminate patients with primary resistance.

The study had a number of objectives:

1. to determine whether there is a correlation between imatinib dosage and the development of resistance,

2. to determine whether there is a correlation between imatinib dose and overall survival, and

3. to evaluate the difference between using starting dose vs. actual dose.

A number of conclusions were observed:

The LRG also presented a poster highlighting survival data from its Patient Registry. The LRG Registry contains data on 1,347 GIST patients. In the poster, LRG Science Director, Jerry Call, showed how mutation profile varies with the age of on-set of GIST. Pediatric-like GIST can occur up to age 35 and, unlike adult GIST, will have a profile of wildtype and SDH genotypes.

Dr. Peter Hohenberger, from Mannheim University Medical Center in Germany, presented novel data regarding a study of imatinib levels in tumor and surrounding tissue in 24 patients undergoing surgery. At surgery, tumor and normal tissue sample were taken for analysis of imatinib and the imatinib active metabolite presence. Several studies have noted a relationship between imatinib blood levels and outcomes. In this study they did not look at outcomes but they did find a 12-fold variation in imatinib levels between normal tissue samples. The omentum showed the least (1.25 ng/ml) and the liver the most (16.6 ng/ml) with the stomach in the middle (5.25 ng/ml). Dr. Hohenberger also found only a moderate correlation between blood levels of imatinib and imatinib levels in tumor tissue. Vascularity of the tumor and surrounding tissue could explain some of the difference. He also suggested that interstitial pressure within the tumor itself might affect imatinib levels. Dr. Hohenberger plans the future study of GIST tumor physiology looking at patterns of resistance in the tumor itself.

In an unrelated study presented by Dr. Antoine Italiano of Institut Bergonie in France, researchers showed that firstline imatinib is a feasible and effective treatment in patients with advanced GIST who are 75 years old and older. Overall survival is similar to that of younger patients. Interestingly, the authors reported that blood levels of imatinib appear to rise with age. The authors speculate that this finding may be related to decreased metabolism and to lower weight impacting the balance of imatinib in the body and in the bloodstream.

Dr. Rutkowski presented a study showing that patients taking Sutent had better outcomes when they experienced arterial hypertension (AH). Arterial hypertension (high blood pressure) is often experienced by GIST patients taking sunitinib. AH is thought to be an indicator that the drug’s anti-angiogenic design is working. It was also reported that patients with wildtype and exon 9 genotypes did better on sunitinib, thus reinforcing the prognostic value of GIST genotyping.

Preliminary results of the crenolanib trial for GIST patients with the PDGFRA D842V mutation were reported in a poster by Dr. Margaret von Mehren of Fox Chase Cancer Center in Philadelphia, Penn. Crenolanib is the only available tyrosine kinase inhibitor with in vitro activity against PDGFRA D842V. Toxicities have mirrored phase I experience. Preliminary metabolic response was observed in one of seven patients treated. Accrual into this trial is ongoing. Future trials are planned to optimize the dose and schedule of crenolanib in D842V patients.

All in all, a great deal of potentially useful information was presented at this year’s CTOS conference, and the LRG was pleased to once again attend and present. The hope is that the research presented here will lead to further research and new treatment options, and we will be here to report on it when it does.