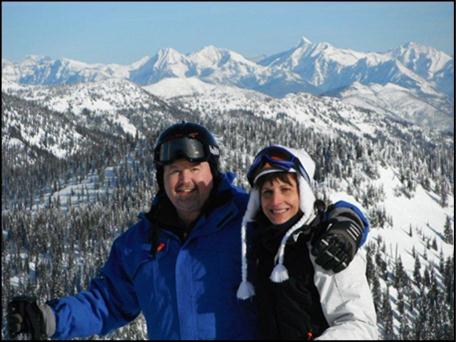 I was born August 6, 1961 in Turlock, Calif., and attended high school in Half Moon Bay, Calif. After graduating from California State University, Chico, I married Lori on June 22, 1985. The day after the wedding, Lori and I loaded everything we owned into a 4X8 U-haul and moved to Missoula, Mont. so that I could continue working toward a degree in education. Shortly after graduating we moved to Kalispell, Mont. where I began my teaching and coaching career. I have taught from third grade to twelfth grade, where most of my career was spent in the fourth grade classroom, and where I sometimes felt like the biggest kid in the room. I coached many sports over the last twenty-seven years. High School football, track and wrestling are where I spent most of my afternoons. I continue to count my blessings because of all the wonderful people – young and old – that I have been fortunate to work with during my career.

My wife, Lori, and I live in Kalispell, Mont. We have two wonderful daughters, Kelly, twenty-three years old, and Dayna, seventeen years old. Kelly lives in Colorado and works at Whole Foods and Dayna is a senior in high school. Lori is an office manager for a doctor’s office. As a family we are usually on the move enjoying the many wonderful outdoor activities that Montana has to offer. The activities that we enjoy include hiking, camping, kayaking, white water rafting, skiing, hunting, and fishing. Although GIST has changed the level at which I participate in these activities, it has not robbed me of the enjoyment they bring to my life. The activities would mean very little without all the good friends and family with whom I’ve enjoyed these activities over the years. The support I have received is incredible and the Life Raft Group has played an important part in that support.

I became acquainted with the Life Raft Group shortly after my forty-seventh birthday. On August 7, 2008 I underwent emergency surgery for what was thought to be a ruptured, encapsulated appendix. I went into surgery believing they had finally solved the mystery of the one-and-a-half year-old history of intermittent gastrointestinal bleeding Unfortunately, I woke up to discover that I had a rare form of cancer called GIST but I was told not to worry. The surgeons had been able to successfully remove a tumor the size of a grapefruit from my small intestine with clear margins, and the likelihood of recurrence was small. Ignorance was bliss until I began researching GIST and came across this little life raft called LRG, and began to realize that I needed this information, because my doctors at this point in time had no idea how GIST was treated. The information I received from the Life Raft Group saved my life. I ended up scheduling an appointment at Oregon Health & Science University (OHSU) and learned that there was close to a hundred percent chance of GIST returning if I didn’t start on Gleevec. I started the drug the very next week and everyone on the raft was amazing. I learned that there was no such thing as a dumb question. All I had to do was ask and the responses just rolled in and they were extremely helpful. I feel that I have hundreds of friends that I can call on any time and they would paddle on over to help.

I retired a year and a half ago when GIST was discovered in my liver. I was ramped up to 800 mg of Gleevec and found that having an inflexible schedule and being on-stage most of the day wasn’t allowing me to get the rest that I needed to fight this dragon. I love teaching and it was an extremely difficult decision to retire. Now that I have, I know that it was the right move. I have always believed that if I ever showed up to school just trying to make it through the day, instead of trying to make someone else’s day, it would be time to pass the torch to the next generation of teachers.

Currently, I am a dream ski volunteer. I ski with young adults with disabilities one day a week. Every year, I volunteer for a week at First Descents, a kayaking camp for young adults with cancer and I continue to coach track at the high school for a couple of hours a day in the afternoon.

My Mascot: By Dayna Niebaum

He’s that guy that will pick you up when you’re having a bad day. He’s that guy that will be there for you and love you no matter what happens. He’s that guy that always has a smile on his face. That guy is my dad. His passion and love for everything and everyone is what I admire most about my dad. I’ve always had such great respect for him, but the events that truly opened my eyes into seeing his amazing character started back at the hospital, the day he was diagnosed with cancer. Through his words and actions, he continues teaching me the importance of having a positive outlook on life, putting others before myself, and working hard to achieve my goals.

He has been able to battle cancer and not let it stop or limit the things he loves to do. He is one of the most active people I know, and even though he has a tougher time with fatigue, he pushes past the point of exhaustion because he enjoys living an active lifestyle. The pills he takes twice a day make him feel like he has the flu but he won’t let this hold him back. He is able to stay strong and push forward. This has inspired me to always work hard with everything I do. Every day there are new challenges I face and with the inspiration of my dad, I know anything is possible.