The Sarcoma Foundation of America held its Tenth Annual Gala on April 30 in New York, honoring doctors and survivors from many different corners of the sarcoma world. One of our own longtime Life Raft Group members, Maura Cesarini, was honored, along with seven other recipients, with the 2012 Courage Award. This year Maura will also be celebrating her 10-year Cancer-versary with GIST. Her daughters, Bella and Michaella, and husband, Mike, were in attendance to honor her. When Maura first experienced symptoms while pregnant with her second daughter, Bella Danielle, it was thought to be a cyst. After giving birth she was readmitted to remove a tumor and other organs that had been affected by her tumor. We are touched by the strength and perseverance in her story, as was first reported in the February 2003 edition of this newsletter in an article titled “True love, the ‘bomb squad baby’ and cancer.”

“I don’t know why I have cancer. I learned the mortality lesson a long time ago. I do know that if I dwell on the why, it will not change my diagnosis. I try to keep on living each day, enjoying my family and friends and appreciating all that life has to offer. That’s all any of us can do …”

Other honorees at the gala included Dr. Kurt R. Weiss, M.D., Assistant Professor, Department of Orthopedic Surgery, and an Osteosarcoma survivor, from University of Pittsburg Medical Center; Marc Ladanyi, M.D., The Wiliam Ruane Chair in Molecular Oncology, attending pathologist, Molecular Diagnostic Service at Memorial Sloan- Kettering Cancer Center, was honored with the Nobility in Science Award. Both doctors were members of an expert doctor panel, held the day before at the SFA’s Patient Educational Conference. 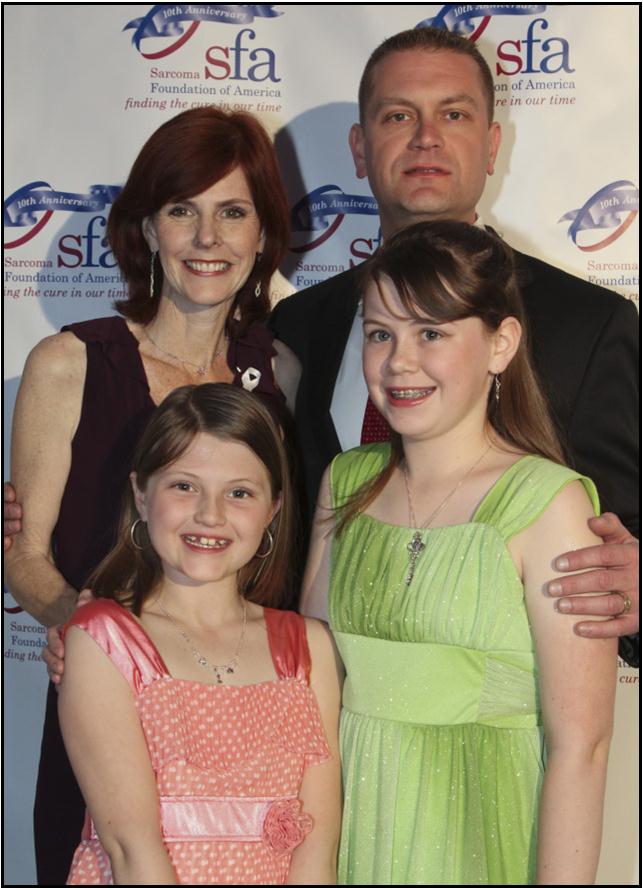 Dr. Weiss gave an inspiring and informative presentation on Advances in Sarcoma Surgery, speaking about advances in Osteosarcoma surgery and harsh realities faced in treating Osteosarcoma. He discussed the procedure to remove a sarcoma tumor and the process to replace bones and limbs with prosthesis. Dr. Weiss summarized that with the exception of GIST, progress in sarcoma has been poor. While sarcoma operations will get better and better, it is however a harsh reality to know that patient survival will not improve until novel biologically intelligent solutions are found!

Dr. Ladanyi gave an eye-opening presentation on How Funding Basic Science Can Lead to New Targets and Treatments. Dr. Ladanyi said that studying the genetic abnormalities of each cancer type generates advances in diagnosis and targeted therapies. As research becomes more cost effective, technological advances allow us to do more, get more data and work faster. New technologies will lead to more comprehensive studies. The funding available for this research must come from a combination of sources of federal grants and philanthropic/ foundation support.

Dr. Mackall presented on Advances in Sarcoma Immunotherapy, reviewing the role of Immunotherapy in cancer treatment. She educated the audience on the history of cancer treatment, particularly about Dr. James Ewing, father of radiation treatment, and Dr. William B. Coley, the father of cancer immunotherapy. While radiation and immunotherapy are different, it is possible that combining these two treatments can help as an effective treatment in some sarcomas. She cited that in the case of Ewing’s Sarcoma a dramatic response is shown if immunotherapy is administered in a certain window of time. She discussed the process of how a vaccine the NCI First Generation Consolidation Immunotherapy trial started, and how the process of the NCI Second Generation trial was done for High Risk Pediatric Solid Tumors.

Dr. Demetri, one of the pioneer trial investigators for Gleevec, gave an indepth presentation regarding GIST and drug development for treatment. He spoke about how all cancers will be broken down and eventually will be moving to more and more specialized and custom treatments for individuals. He noted that the recent Regorafenib trial was able to be fast tracked for FDA approval. He discussed how drug development is inefficient and that mouse models aren’t replicating results in humans. He highlighted that the cost to produce one drug is one billion dollars and can take seven to 12 years to produce. While an effective treatment is available for GIST, better treatments are sorely needed.

As we celebrate and congratulate her on the honor given to Maura, it is amazing and eye opening to realize that within the branch of sarcoma, there are vast number of these rare cancers that do not have a magic bullet treatment like Gleevec. There is hope on the horizon, with improvements in surgery, research in genetic testing, new developments in immunotherapy and the drive to continue to seek faster methods and custom treatments for these cancers. We can hope that one day we will celebrate a 20 -year survivorship and even more so to one day find a cure.