Molecular mechanisms can help identify GIST treatment options. GISTs are the most common mesenchymal tumors of the gastrointestinal tract and are caused by activating mutations in the KIT or PDGFRA receptor tyrosine kinase (RTK) genes 1-3. Although they can be effectively treated with the small molecule kinase inhibitor imatinib mesylate (Gleevec®) 4, approximately 50 percent of the patients develop resistance to the drug during the first two years of treatment 5. A Food and Drug Administrationapproved second-line therapy (Sutent®) and an array of experimental third-line therapeutic options exist 6, but most of these compounds also target the activated KIT or PDGFRA kinases. This “kinase-centric” approach is not unproblematic, however, because the most prominent imatinibresistance mechanism involves secondary mutations in the KIT/ PDGFRA genes themselves 7.

Our laboratory therefore uses different approaches to identify novel treatment strategies. One approach focuses on dissecting the mechanisms of action of imatinib to identify the molecular players that are involved in imatinib-induced apoptosis and quiescence 8 (LRG’s October 2009 Newsletter issue). In a second step we are using our knowledge to target these molecules for therapeutic purposes.

We have previously shown that imatinib treatment of GIST cells leads to increased amounts of a certain cellular protein, histone H2AX 9,10 (also see LRG Newsletter December 2007). In our study, we could show that this process is causatively involved in killing GIST cells. A second finding in our study involved the notion that the amount of H2AX contained in a cell is regulated by a pathway that controls protein degradation, the so-called ubiquitin- proteasome machinery.

This discovery was the first step at asking whether it would be possible to increase H2AX levels in GIST cells by a different means than by treatment with imatinib. Based on our findings above, one way of increasing the amounts of H2AX would be by inhibiting its degradation. This could be done through inhibition of the ubiquitin-proteasome machinery. In fact, the concept of proteasome inhibition has been of interest for the pharmaceutical industry for a while, and a number of compounds already exist.

Bortezomib (Velcadeâ) is such a drug and so far the only FDA-approved compound of its kind. Bortezomib is currently used for the treatment of multiple myeloma and mantle cell lymphoma 11. We therefore wanted to test the hypothesis that increasing the amounts of H2AX by inhibiting its degradation with the proteasome inhibitor bortezomib would have a therapeutic effect in GIST cells 12.

We started out testing an array of different concentrations of bortezomib asking whether the compound can induce cell death in GIST cells. Employing various methods for experimental readout, we could confirm that bortezomib is active in GIST. In fact, it was able to kill cells at the same concentrations that are reportedly used to kill multiple myeloma cells – indicating that our results comprised a specific effect of bortezomib in GIST. 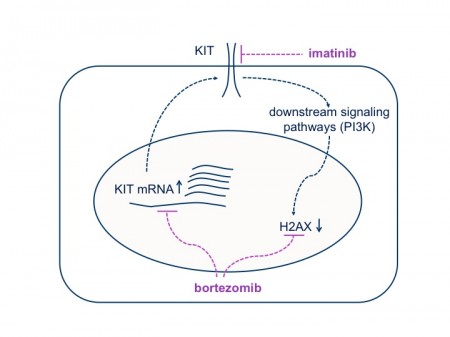 However, we were not satisfied with knowing that bortezomib is able to kill GIST cells. We wanted to know more about its mechanism of action and whether our hypothesis was correct – that bortezomib acts through increasing the levels of histone H2AX by inhibiting its degradation (See Figure 1).

So, in a next step we tested whether H2AX levels increased after bortezomib treatment. Using a technique called immunoblotting, we were indeed able to show that the amounts of H2AX were higher in cells that received bortezomib, seeming to prove our hypothesis. By carrying out a number of other experiments, however, we found out that H2AX upregulation is most likely not the only mechanism of action of bortezomib.

While searching for the possibility of an additional mechanism of action of bortezomib, we detected to our surprise that it led to a dramatic reduction of KIT protein levels accompanied by loss of KIT tyrosine phosphorylation. Since it is known that GIST cells are critically dependent on the expression of oncogenic KIT 13, its downregulation most likely plays a substantial role in bortezomib- induced apoptosis in GIST.

It was surprising, however, that treatment with a drug that inhibits degradation of proteins (hence leading to their accumulation) should result in decreased levels of KIT. How could we explain this curious finding? One way through which cells control protein levels is regulating the rate at which they are produced. This process starts with the transcription of the protein’s DNA sequence. When transcription from DNA is reduced, less messenger molecules (RNA) are being made and hence less protein is produced. We therefore tested the possibility that bortezomib could affect the transcription of the KIT gene. Indeed, we found that bortezomib affected the levels of KIT messenger molecules (RNA). However, further tests pointed to the fact that bortezomib affects transcription on a more general level by reducing the transcription of many genes across the cell’s DNA. (It has previously been shown by other researchers that protein degradation is essential for transcription to function properly 14.) In addition, our group has previously found that GIST cells are exceptionally sensitive to transcriptional inhibition 9. Therefore, our results explain very well, why GIST cells are affected by transcriptional inhibition through bortezomib. Taken together, the above results point to a dual mechanism of action of bortezomib in GIST: increasing the amounts of H2AX within the cell, but also decreasing the amounts of active KIT through transcriptional inhibition

Because our initial experiments were carried out in an imatinib-sensitive cell line model (GIST882), we next tested whether bortezomib is active in imatinib -resistant GIST cell lines (in collaboration with LRG Research Team member Sebastian Bauer, University of Essen, Germany). After all, the main goal of our study was to find new therapeutic options for imatinib-resistant GIST patients. To our surprise, these cells were even more sensitive to bortezomib than GIST882 cells. Moreover, cells that were directly derived from an imatinibresistant tumor of a GIST patient also responded to bortezomib treatment, just as we had hoped.

We then went one step further and treated mice engineered to get GIST with bortezomib (in collaboration with LRG Research Team member Brian Rubin, Cleveland Clinic). Although the results from these studies were not as clear-cut as the studies in the tissue culture dish, some mice clearly responded to the treatment. These promising results indicate that bortezomib indeed has an effect in vivo further corroborating our approach.

Taken together, our results provide a compelling rationale for clinical trials testing the efficacy of bortezomib in GIST patients 15. However, bortezomib has known disadvantages with respect to adverse effects and its efficacy in solid tumors – potentially because of problems concerning its bioavailability. Because of these issues, there is an increased interest in the development of second-generation proteasome inhibitors with improved pharmacologic characteristics. Some of these compounds have already entered advanced clinical trials for multiple myeloma. Our laboratory has recently started testing several of these novel compounds in GIST with very promising preliminary results.

In summary, our approach to dissect the molecular pathways that are involved in imatinib-induced cell death were successful in identifying a novel therapeutic target (histone H2AX) and have led to the discovery of a new therapeutic strategy for the treatment of GIST, namely, the use of inhibitors of the ubiquitin-proteasome machinery.