Skip to content
Home/Life Fest 2014: What’s New in the Science of GIST? 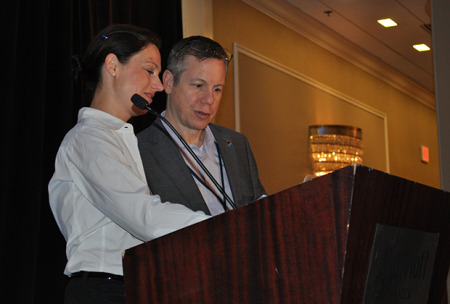 In addition to spending time catching up with fellow patients and caregivers and attending the myriad of useful workshops featured at Life Fest 2014, participants were treated to an update of what is new in the science of GIST. Drs. Anette Duensing and Brian Rubin, both from the LRG Research Team, gave the audience a comprehensive presentation that went into great detail about what the LRG’s Research Team has recently accomplished and also a bit of what we might expect in the future. Dr. Ramesh Bulusu, of Cambridge University Hospital and PAWS-GIST, both in the United Kingdom, also gave a presentation on the Management of GIST. These presentations were captured on video and will eventually be shared with the entire GIST community, but I will attempt to summarize them here.

Dr. Rubin set the stage by talking about his memories of the origins of the LRG Research Team – his being approached by Norman Scherzer, LRG’s Executive Director, and Jerry Call, LRG’s Science Director – and also mentioned how thankful he was that in addition to funding from the pharmaceutical industry, a great deal of support had been provided through donations from LRG members. After showing a video that depicted GIST cells dying, he reiterated what the LRG Research Team was looking to accomplish: “Our goal is to kill GIST cells, because that would essentially represent a cure for GIST patients.”

After Dr. Rubin’s remarks, Dr. Duensing took the stage to discuss some of the team’s recent findings. Key among these was the finding that alterations in the cell division cycle can predict Progression Free Survival (PFS), with those who had no alterations doing better than those who did. The team has produced a paper based on these findings, which is currently in review for publication. She also mentioned that Dr. Matt van de Rijn has identified a potential new therapeutic target for GIST, known as ROR2. It is a tyrosine kinase, which is a similar type of molecule to KIT/PDGFRA. In mouse models, mice who had more ROR2 had more aggressive disease, and removing ROR2 led to less metastatic potential and a decrease in tumor size. The next step would be to see if a compound can be developed to take advantage of this target. Dr. Duensing then commented on her own research, involving quiescence or “cell sleep.” She mentioned her work on a DREAM complex, which is a type of “sleep inhibitor.” In some cases, she noted, it seems that Gleevec shrinks a tumor but doesn’t make it disappear altogether, and then when Gleevec is removed, the tumor cells can “wake up” and make the tumor grow again. The hope is that combining Dr. Duensing’s “sleep inhibitor” with Gleevec can make the Gleevec more effective at killing cells. Dr. Rubin then retook the stage to discuss the SURE trial that he is involved with. This trial combines Sutent and Regorafenib (Stivarga), both approved treatments for GIST that are effective against different mutations. The theory is that cycling the drugs would be more effective than taking them individually. Patients in the trial, who have already failed Gleevec, would be given Sutent, then after a few weeks, Regorafenib. The patient would then cycle between the two drugs, with the goal being to delay progression. Finally, Dr. Duensing took the stage one final time to discuss her research that tested FDA drugs approved for other cancers to see if they are effective vs. GIST, and to discuss Dr. van de Rijn’s immunotherapy-based study that looked into anti-KIT antibodies.

Later in the morning, Dr. Bulusu talked about how GIST management was being done in his hospital in Cambridge, United Kingdom. He mentioned the importance of seeing a specialist, and described how his hospital utilized a multidisciplinary team consisting of not only an expert oncologist, but also an expert histopathologist, surgeon, radiologist, and clinical nurse specialist. This dovetailed well with the Survival Series presentation given on Sunday by the LRG’s own Norman Scherzer and Jerry Call, where the need to see an expert was clearly stated. Dr. Bulusu then explained to the audience a bit about PAWS (Pediatric, Adolescent, Wild Type, and Syndromic) GIST, and also discussed the clinic for these patients recently held in the UK (see the article about this in our last LRG newsletter at https://liferaftgroup.org/2014/10/paws-gist-cancer-clinic-opens-in-the-uk/).

All in all, a great deal of information was shared, and the presenters graciously stayed and answered a number of questions both from the audience and privately. We at the LRG would like to thank both the presenters and participants for making this sharing of knowledge possible, and look forward to doing more of it in the future.