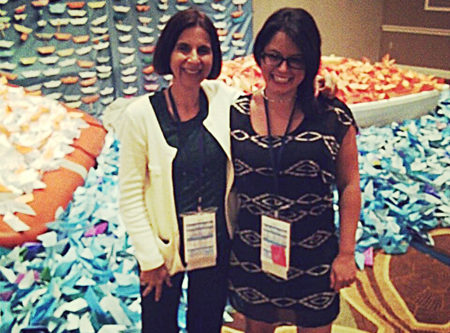 My daughter Carolina was diagnosed with GIST back in January 2006, in Dallas, Texas.. She was 27 years old then.

We were lucky enough to attend Life Fest 2006 in the same city where she lived.

Attending Life Fest only a few months after Carolina’s diagnosis was crucial for us.
We attended the first event very nervous, not knowing exactly what were we doing there. Only 5 minutes after registration we felt embraced by so much love and care we just couldn’t believe it. Jim and Margie Hughes registered us and then followed us wondering which one was the patient. They had lost her daughter only a few months before, and “adopted” Carolina and myself immediately.

Meeting John Poss, Norman, Novartis CEO Dan Vasella, Dr. Jon Trent, Richard Palmer, Tom O, among so many other Gisters, caregivers and LRG staff members that stayed forever in our hearts was just amazing. I remember telling my daughter: “I never thought that GIST could mean something positive to us, but thanks to GIST we met the most wonderful people in the world!.”

This is how we felt at the end of Life Fest 2006, not to mention all we learned about the disease and how to live with it.

I encourage old and especially newly diagnosed Gister’s to participate in Life Fest 2016. I promise, Life Fest will change your life for the best.

See you in July, dear friends!

Bolivia (Forgot to tell you, that after Life Fest 2008 Alianza GIST for Spanish speaking countries was created, after having met wonderful people from different countries in South America).