The following are summaries of two of the Wild Type GIST parallel track sessions at Life Fest, 2016, submitted by Rebecca Bensenhaver of GSI International.

“I was fortunate to be able to attend Life Fest 2016.  There were many interesting presentations given during the conference.  In an effort to pass the information on to those not in attendance, I am writing summaries to share the information.

The following is a summary of the session entitled “Demystifying Rare Subtypes-Quadruple Wild Type GIST” given by Dr. Jason Sicklick of Moores Cancer Center at the University of California, San Diego. 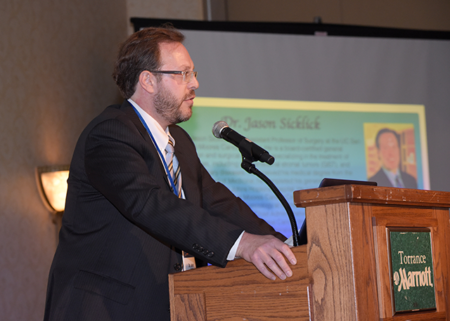 Researchers and medical professionals are just starting to learn about a a subset of GISTs called Wild type (WT).  Initially, they knew that WT GISTs did not have a mutation in either KIT or PDGFR-alpha.  More recently, they have learned that these patients may have a problem with the NF gene, the BRAF gene (RAS pathway), or may have an SDH gene alteration.  In the last few years, Dr. Helman and the group at NIH have strived to determine changes in the methylation status of the succinate dehydrogenase c gene as an oncogenic mechanism.

But still there still is a subset of GISTs called quadruple-negative WT GIST. The terminology for quadruple-WT came about because they are KIT-negative, NF1-negative, BRAF-negative, and do not have an SDH mutation.  What we know about these patients is that they lack sdhb and they over-express insulin-growth factor receptor.  In an effort to better understand the biology of these tumors, Dr. Sicklick collaborated with Foundation Medicine to sequence approximately 400 tumor samples.  The aim of this sequencing was to look at the genomics to say whether alterations identified in the sequencing are causative factors.  The alterations fell into one of three categories:

1) a known somatic mutation (somatic meaning that the mutation occurred only in the tumor itself). These are previously known mutations that have been recorded.

2) a known germline mutation (germline meaning that we inherited it from our parents).

3) “variants of unknown significance” (VUS).  These are genomic alterations have not previously been identified as being causative for tumor growth.  A lot of the alterations we have in our germline probably have no bearing on GIST.

As a next step, they used computer modeling to figure out whether these VUS changes may potentially be causing the disease.  Using four other different assessment tools, they tried to figure out whether these new variants are problematic.  If at least three out of the four programs said that a variant might be a problem, they considered that it could possibly be a causative factor.  If only two programs said it might be a problem, then they considered that it may not be as important.

Then, they took it a step further and looked at all the genes.  Anything that occurs in at least 1% of the general population they threw out, thinking that these are just variants that anyone might have.  The Quadruple-WT GIST tumor analysis showed a heterogenous landscape.

They found that here were seven genes that were significantly more commonly altered in the quadruple WT GIST group set.  These genes are fairly broad and have not been previously associated with GIST.  The most novel things they found were the gene fusions.  The concept of gene fusion as a driving cause of cancer is relatively new.  Within the NIH Clinic group, there was one patient identified as having KIT fused with PDGF, but the new gene fusion discovery pertains to genes not previously identified as being problematic:

Dr. Sicklick mentioned a case of an ETV6-NTRK3 fused GIST patient that was treated with an pan-TRK inhibitor who had failed five different prior treatments.  After eight weeks of therapy, there was massive regression of the tumor ( a 44% response) in a tumor that was previously refractory to all therapies.

So, a new research finding pertaining to Quadruple WT GIST is:  There is a subset that is caused by a FGFR1 fusion, and subset that are caused by a ETV6 fusion, and these tend to respond to drugs that are now in progress.  These tend to occur to people in their 30s to 50s.  They are slightly more common in men than women.  They can occur anywhere in the GI tract.  They are not truly WT in that there are gene alterations.  With that, they are looking at more mechanisms to open the door for more targeted therapies.  There could possibly be other genes involved in the cancer for these people.

Dr. Brian Van Tine: “Is Wild Type GIST All About Glutamine Or Is It Also about Glucose?”

Brian Van Tine is a sarcoma doctor, doing research in the area of metabolism.  Metabolism researchers in the field of cardiology and diabetes work very hard not to kill anything.  This is not the case with cancer metabolism treatment.  Frequently, in the treatment of regular GIST, Gleevec, by itself, provides the required response: One problem: One pill.  It turns out that you can’t do that with sdh-deficient GIST. You may have to look at two targets or more in order to effectively block both glucose metabolism and glutamine metabolism.

The metabolism cycle is a huge spiderweb network of interactions between various pathways  (including the TCA cycle, the pentaphosphate pathway, the urea cycle pathway, as well as mitochondrial and glutamine biology.).   Normal metabolic function allows glucose to be converted into glutamine; and likewise, glutamine to be converted to glucose, through a very complex energy system. The mechanics of this energy system can be likened to the flow of a river.  If you try to dam one part of the river, the water will just flow another direction to reach the same end point.  In sdh-deficient GIST there is a glycolysis energy cycle problem.  In glycolysis, glucose is the end product used by the cells for energy production and biosynthesis.  Glucose is what is used to make proteins, to make fats, to make muscle, to make DNA, to make everything.

Sugar metabolism can be likened to the gears on a watch.  A metabolite can enter the cycle in one of many different pathways.  Typically in energy metabolism, if something is cut it off, the system is able to get it from somewhere else.  Enzymes can go both forward and backward on the gears.  If you place stress on the system by adding or subtracting metabolites, the gears will adjust to allow the metabolites to just go the other way.  An inherent feature of sdh-deficient GIST is an altered citric acid cycle (TCA) that rewires metabolism in such a way that the energy systems interact differently, with some gears turning independently of each other rather than as a unit.  Sdh-deficient cell growth is often indolent because it is a crippled cancer.  With that crippling comes a vulnerability that allows for therapeutic opportunities. If a gear is disconnected with the others, all you have to do is to figure out how to stop the disconnected gear.  That is where the trick is….how to stop the function of the crippled gear without killing the patient.

What is the purpose of cancer?  It has one purpose, and that is to make “more”.  Normal TCA cycle function utilizes an anaplerotic reaction that forms intermediate metabolites.  In sdh-deficient GIST, the TCA cycle is aberrantly broken apart into one clock gear, separate from the other metabolic cycles.  In an effort to make “more”, the broken TCA cycle of sdh-deficient cells sucks up some nutrients and makes an excess of others with a resulting abnormal build-up of succinate which is involved in the process of cellular respiration.  Also, it has been found that a lack of sdh activity commits cells to consume extracellular pyruvate.  Pyruvate carboxylation diverts glucose-derived carbons into aspartate biosyntheses used in sugar synthesis, thus sustaining cell growth.  It is hypothesized that dual inhibition of glutamine and pyruvate carboxylase may effectively cause the death of sdh-deficient tumor cells due to the cell’s inability to either produce nor access glucose for survival.

This concept provides a very interesting treatment paradigm for the treatment of sdh-deficient GIST which warrants further investigation.  In regard to use of a dual blockade of glutamine and pyruvate carboxylase, the question of “where do we need to place the pyruvate carboxylase in this equation” for maximum therapeutic benefit” is relevant.”