Dr. Nimer is an expert in treating leukemia and lymphoma. A hematologist, molecular biologist, and bone marrow transplant physician, Dr. Nimer is currently the Director of the Sylvester Comprehensive Cancer Center at the University of Miami, Florida. Dr. Nimer was at Memorial Sloan-Kettering Cancer Center in New York for nearly 20 years, where he held the Alfred P. Sloan Chair and served as Head of the Division of Hematologic Oncology, Vice Chairman for Faculty Development, and Chief of the Hematology Service. He also served as a member of Sloan-Kettering Institute for Cancer Research, an Attending Physician at Memorial Hospital, and a Professor of Medicine and Pharmacology at Weill Medical College of Cornell University. Dr. Nimer was elected to the American Society of Clinical Investigators at age 42, and is a Fellow of the American College of Physicians. He serves on the editorial board of several medical journals, and on the medical boards of the Myelodysplastic Syndrome Foundation, the Bone Marrow Foundation, and other foundations. Dr. Nimer is also the Chairman of the Medical Advisory Board of Gabrielle’s Angel Foundation for Cancer Research.

After numerous misdiagnoses of leiomyosarcoma in 2003, Dina was correctly diagnosed with GIST at her little hometown hospital, Torrance Memorial Medical Center. Later, she set out to change the GIST awareness of medical personnel, so it would not happen again – at least in Los Angeles. Over the past few years she has met with numerous oncologists, surgeons, nurse practitioners, and pathologists to provide them with Life Raft Group booklets specifically for doctors, as well as pamphlets for their patients. She is currently a Life Raft Group Leader for the Southern California area, which has over 100 members.

Dr. Anette Duensing studied medicine in Germany and the U.K. She received her M.D. from the University of Hannover School of Medicine, Germany, where she also trained in Pathology. Following her doctoral thesis work on cancer cytogenetics, Dr. Duensing was awarded a research fellowship from the Dr. Mildred Scheel Stiftung für Krebsforschung of the Deutsche Krebshilfe, which she spent in Dr. Jonathan Fletcher’s laboratory at Brigham and Women’s Hospital, Harvard Medical School. During this time, she led the GIST-related studies in Dr. Fletcher’s laboratory including the correlative science to the very first clinical trials of imatinib (B2222) and sunitinib in GIST. Since 2003, Dr. Duensing heads her own research laboratory at the University of Pittsburgh Cancer Institute (UPCI), Hillman Cancer Center. She is an Assistant Professor of Pathology at the University of Pittsburgh School of Medicine and member of the Cancer Therapeutics and Cancer Virology Programs at the UPCI. Dr. Duensing is the recipient of an AACR Scholar-in-Training Award (AACR-AstraZeneca), a Young Investigator Award from The Liddy Shriver Sarcoma Initiative, the UPCI Junior Scholar Award 2010 and was named Hillman Fellow for Innovative Cancer Research. She is Academic Editor for PLoS ONE and is an author of over 60 original articles, reviews and book chapters.

The Life Raft Group is proud to present Bayer Phamaceuticals with its 2014 Patient Outreach Award. One of the largest challenges the GIST community faces is lack of awareness amongst both the general public and medical community about the disease that so profoundly affects their lives. Working closely with the Life Raft Group, it was Bayer’s goal to help address this problem. Out of a joint meeting at Bayer headquarters, the idea for the first ever worldwide GIST Awareness Day was borne. The fruits of that labor have been on display all year. Increased marketing and educational materials to patients and doctors, a global origami boat challenge and an advocacy trip to Washington D.C. mark just a few of the strides that were able to be made with Bayer’s support. We thank Bayer with this award for their commitment to the principle that one of the best ways to help the GIST patient community is to educate those outside of it as well.

Brian is a life-long resident of the Huntington area, where he lives with his wife Kelly. They have three children, Erich, Kevin and Danielle. He is currently entering his 10th year with the investment firm Cantor Fitzgerald as a Managing Director and has been in the securities industry for close to thirty five years. After being diagnosed with Neurofibromatosis, he became involved with Children’s Tumor Foundation. He is an Elder with the Presbyterian Churh and is supporter of the Heisman Trust, Lead the Way, and the Life Raft Group.

When her 15 year old daughter was diagnosed with the Pediatric/wild-type GIST it was undoubtedly the worst news Jayne Bresington and her family had ever received. Very little was known or available to patients with this diagnosis in the UK. Inspired by a visit to the US Pediatric & Wildtype Clinic, and through support and fundraising from GIST Support UK, family and friends, and the dedication of Dr. Ramesh Bulusu, Bressington and team have opened a Paediatric, Adolescent, Wild-type and Syndromic (PAWS) GIST Clinic for patients in the United Kingdom. The PAWS GIST Clinic aims to improve treatment, provide highly specialized care plans and find a cure for this rare form of cancer.

Dr. Robert Maki is Professor of Medicine, Pediatrics, and Orthopaedics, and the Steven Ravitch Chair in Pediatric Hematology-Onocology. He has published more than 100 articles on sarcoma treatment and basic science research, having worked on studies related to sarcoma since 1985. He treats adults and children with sarcomas (connective tissue cancers of bone, cartilage, muscle, fat and other soft tissue) and has an interest in translational research and the biology that leads to different types of sarcomas.

After his MD/PhD at Cornell Medical College in New York City, he was a resident at Brigham and Women’s Hospital in Boston before a medical oncology fellowship at Dana-Farber, and was on staff at Dana-Farber before starting at Memorial Sloan-Kettering in 1999. In March, 2011 he moved to the Mount Sinai Medical Center to develop the effort in adult sarcoma therapy and research. Dr. Maki is also the Director of Translational Oncology at the Sarcoma Alliance for Research through Collaboration (SARC).

Joining a host of other pioneers in the field of GIST treatment, we are pleased to include the Stivarga Development Team among their ranks. In a field that offers far too few treatment options, it was happy news indeed for GIST patients when on Feburary 25, 2013, Stivarga was approved in the United States for the treatment of GIST, providing another option for patients who failed or were intolerant to existing oral therapies. For the additional “life raft” you have provided patients, we are grateful.

Thomas G. Overley, a lawyer and guitarist holds a unique spot in the pantheon of GISTers—the “poet laureate” of the Life Raft Group.

Mr. Overley was a graduate of Indiana University and a 1984 University ofToledo college of law graduate. He later developed a niche practice of manufactured home law and played in local rock bands, most notably the Plat Three Band. But it was his poetry and way with words that has changed the lives of so many. “You could explain something in your own words,” his daughter said. “He could come back and say it the way you wanted to say it but didn’t have the ability to.”

Tom Overley’s advice aided dozens if not hundreds of GISTers in their GIST journey and probably saved a few lives. One of Tom’s famous phrases, in the end, perfectly defined him, “Be the person who slides into the next life with a body which is worn and tattered and saying, ‘What a ride!’” Tom passed away on March 14, 2012 after a very wild and very beautiful ride. 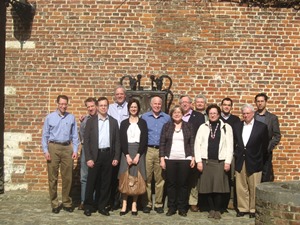 In 2006, the Life Raft Group initiated a strategic research plan – Pathway to a Cure – that emphasized cooperation, coordination and accountability and brought together 10 of the finest GIST researchers in the world. Its focus was on identifying projects with the greatest chance of successful outcomes.

In the last 8 years, Pathway to a Cure has laid the groundwork in the search for a cure for GIST and made progress on a broad number of fronts including developing mechanisms to test new drugs, identifying new therapeutic compounds, reaching further than ever before in the investigations into mechanics of treatmentresistance, and why some GIST cells survive an otherwise successful drug treatment, as well as a comprehensive GIST tissue bank. The team has individually and, as of this year, collaboratively authored over 150 articles for scientific publication.