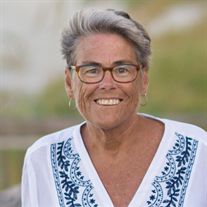 Pat was born in Providence, Rhode Island, the daughter of the late Pat and Mike Murray. She was raised on Smith Hill and in Breakwater Village, Narragansett and attended St. Casmir’s School and St. Patrick’s High School. Pat graduated from Rhode Island College with her Bachelor’s Degree in Elementary Education and earned her Master’s Degree in Middle School Education from Brenau University. She won multiple Teacher of the Year awards, was named a Presidential Award Winning Science Teacher, was a highly regarded mentor to new teachers, and a graduate of NASA’s Teacher in Space Program. Pat spent many years teaching Science to gifted youth. She retired from teaching in 2001, after many years of teaching.

Pat loved summers at the beach and any time of year playing the slot machines. She enjoyed traveling with her family and friends and welcomed any opportunity to host a tea party at her home in Acworth, Georgia.

After being diagnosed with cancer in 1990, Pat became an active advocate for cancer patients all over the country. She was a volunteer of the Winship Cancer Center of Emory University and an Ambassador for the LiveStrong Foundation. Pat provided inspiration to countless others diagnosed with cancer, by demonstrating that it was possible to LIVE an active and positive life, in spite of cancer. She often made calls and had meetings with newly diagnosed cancer patients and reminded them that they could fight the disease successfully. She would often recall that she had been told over twenty years ago that she had six months to live. Her courageous battle of nearly 25 years ended with dignity on December 31st at the age of 64.