GIST is defined as becoming “resistant” when it no longer responds to the drug(s) that are used to treat it. Most of these drugs belong to the class of tyrosine kinase inhibitors (TKI’s.). These drugs bind to KIT and PDGFRα kinase receptors to silence the abnormal tumor growth signals. However, an alteration in the structure of KIT and PDGFRα, caused by a few specific DNA changes, may disrupt the binding of a given drug to the receptors. Consequently, the ability of the drug to bind correctly to the target receptor is compromised, not able to silence the signal and resistance or tumor growth occurs. About 15% to 20% of GISTs have primary resistance; they don’t respond to these drugs, right from the start of treatment. The TKI’s approved for GIST include; Gleevec (1st line), Sutent (2nd line), Stivarga (3rd line), and Qinlock (4th line).

There are several different types, which are described below: 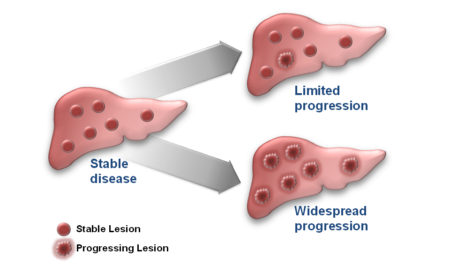 I have Resistant GIST. So, now what?

First, make sure you really have progression.

False progression: Sometimes when tumors respond to medication, they can may swell and appear larger on a CT scan. These tumors will usually have a change in density (less dense) and appear darker on a CT scan and the border may become better defined. A PET scan of this type of tumor will typically show decreased glucose uptake.

In addition, tumors that have a density very similar to surrounding organs (like the liver) may be hard to find on an initial scan. Following drug treatment, they become less dense and can then be seen later on CT scans. This may appear to be progression since they can now be seen for the first time, but in fact they’ve been there all along, and are now visible since they are responding to treatment.

False progression, if it occurs, usually happens early in the treatment and is probably much more likely in 1st line treatment (typically imatinib) than in later treatment lines.

Second, we highly recommend consulting with a GIST expert.

The above examples of how difficult it is to determine whether progression has occurred help demonstrate the need for a radiologist familiar with those types of responses. As a case that has progressed can be considered advanced, it is best to also involve a multidisciplinary team with expertise in GIST. Generally speaking, GIST experts can be found at larger cancer centers that have a Sarcoma Center. To find a GIST Specialist, please go to our searchable database of GIST Specialists.

What are my options?

Treatment options generally depend on the type of progression you have, as limited and widespread progression are handled differently.  Please note that this is generalized information, and you should speak with your physician who may be more familiar with the specifics of your case.

If you have Localized/Limited Progression (progression in one or two lesions):

If you have Generalized/Widespread Progression (progression in more than two lesions):