Familial GIST is very rare – even rarer than most GISTs, which are called “sporadic” (not inherited). Only a small subset of people who develop GIST will do so because of a strong inherited tendency or “predisposition”.

Does every person with a germ-line c-kit or PDGFRA mutation develop GIST?

No, not everyone with a germ-line c-kit or PDGFRA mutation will develop GIST. A study of one large family with a germ-line c-kit mutation estimated that individuals in the family who carried this alteration might have up to a 90% risk of developing GIST by age 70. However, more data are needed to determine whether this estimate is true of all possible mutations within the c-kit and PDGFRA genes, and to find out whether anything can increase or reduce these risks.

It is also not clear why the symptoms, location, age at diagnosis and clinical course of some GISTs are different from other GISTs, even within the same family in which individuals carry the same germ-line mutation. It is likely that other unknown genetic, environmental and/or lifestyle factors also contribute to the development of GIST, even in the presence of an inherited susceptibility.

What are the clinical steps for identifying familial GIST?

The first step in identifying familial GIST would be to speak with a physician, a genetic counselor, or other genetics professional to review your personal and family history. Based on the information that you provide, they may be able to help you evaluate the risk that your family has a familial form of GIST and determine whether additional genetic evaluation would be warranted.

If appropriate based on your personal and family history, it may then be recommended that an affected family member (someone who has had GIST) undergo genetic testing to try and determine whether there is a germ-line mutation in the c-kit or PDGFRA gene in the family. Genetic tests are performed on a sample of DNA from blood or saliva. If an alteration were identified in one of these genes, other family members could then undergo genetic testing to determine whether they have also inherited the familial mutation. Only those relatives with the familial mutation would be at increased risk to develop GIST, whereas those who did not inherit the mutation would not share this increased risk.

There are many factors that should be considered before deciding whether to go forward with genetic testing. These can be discussed with a physician, or other genetics professional. To try and locate a genetic counselor in your area, you can go to the website for the National Society of Genetic Counselors and click on the ‘Find a Counselor’ link. However, because so little is known about inherited GIST, most genetic counselors may not know very much about it at first.

When would an individual become suspicious that his/her family may have familial GIST?

Any of the following features may suggest that familial GIST is present:

(b) One person in the family who has developed more than one separate primary (new GIST, not a metastasis) GIST tumor OR

(c) Two or more close relatives with GIST OR

(e) One person in the family with GIST who also has a personal or family history of unusual skin findings, multiple moles or NF1

Can some people have milder effects instead of GIST tumors?

Beside GISTs, other, milder features have also been reported in some families with germ-line mutations in the c-kit gene. These have primarily included:

(a) Skin findings, including pigmented or colored spots, areas of loss of coloration (“vitiligo”), multiple moles (“nevi”) and even melanoma (a skin cancer of the pigment cells), discoloration around the fingernails, and a group of conditions known as “mastocytosis” or “mast cell disease”

There have also been multiple families reported with GIST and an inherited condition known as “neurofibromatosis type 1” (abbreviated NF1). NF1 is characterized by the development of multiple café-au-lait spots and neurofibromas (benign growths) on the skin, as well as a distinctive pattern of freckling along the armpit and groin. Only a small subset of individuals with NF1 develop GISTs; other tumors may occur in NF1 as well. Germ-line mutations in the c-kit and PDGFRA genes have not been identified in patients with NF1 and GIST to date.

View this video on Familial GIST 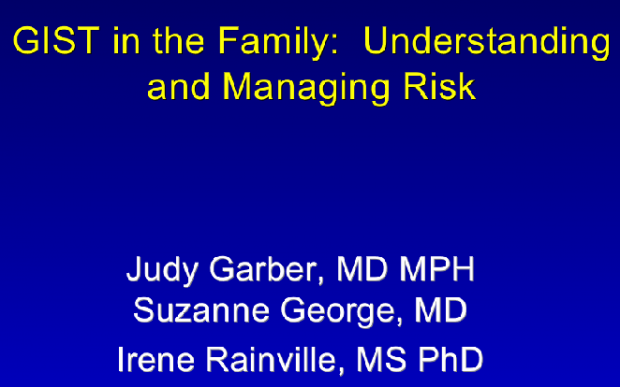