eGIST is a term  used to describe rare GISTs in which the primary tumor is believed to occur outside of the GI tract. Because the treatment of GISTs is very different than other tumors that may be confused with eGISTs, it is imperative that an accurate diagnosis be made. Tumors that have classified as eGISTs have been reported in the following areas:

The majority of reports of eGISTs seem to be from the omentum, mesentery and the pelvis/retroperitoneum. However, a significant number have been reported in other locations.

Agaimy and Wünsch reviewed 200 cases to assess the incidence of eGISTs and their relationship to other GISTs. They were especially interested in the relationship of eGISTs to the wall of the gut. Of the 200 suspected GISTs, they found 14 cases were initially submitted as eGISTs. After re-evaluation, the authors reclassified 11 of the 14 eGISTs as GISTs that had extensive growth outside of the wall of the gut resulting in a loss of contact with the external muscle coat of the gut (8/14) or as metastases from an inoperable GIST (2/14) or metastases from a previously resected tumor that was thought to be benign (1).

Agaimy and Wünsch concluded that “most so called eGISTs represent apparent eGISTs that should have arisen from the outermost muscle coat but have lost their contact to the point of origin due to extensive extramural growth pattern. From a surgical point of view, it is crucial to document and mark any focal attachment or adhesions to the gut wall noticed during surgery for an apparent eGIST. In contrast to most other neoplasms, GISTs should be defined by virtue of any degree of association with the muscularis propria (no matter how minimal), but not by localization of the bulk of the tumour.”

While the review by Agaimy and Wünsch suggest the majority of eGISTs may simply be GISTs that had a small stalk attached to the gut and the much larger tumor simply broke away from the gut, there is strong reason to believe that true eGISTs do exist. An example is the paper by Lam, et al. They reported the case of three eGISTs that were localized to the rectovaginal septum (1) or vagina (2). All three of these cases tested positive for KIT and CD34 (like the majority of GISTs) and had other immunohistochemical features of GIST. More importantly, all three of these tumors had KIT mutations (two in exon 11 and one in exon 9), firmly establishing the diagnosis as GISTs (eGISTs).

The newest method of risk of recurrence assessment, the Joenssu pooled analysis, treats eGISTs separately as a tumor location. 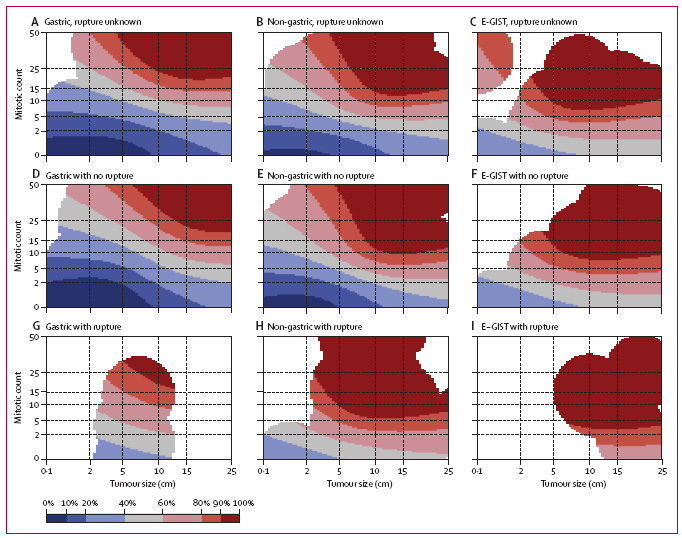 Contour maps for estimating the risk of GIST recurrence after surgery

The upper row maps are used when tumor rupture status is unknown (A,B,C), the middle row maps when the tumor has not ruptured (D,E,F), and the bottom row maps when tumor rupture has occurred (G,H,I). Red areas depict high risk, blue areas low risk, and white areas indicate lack of data. The percentages associated with each color (key) indicate the probability of GIST recurrence within the first 10 years of follow-up after surgery. For example, the middle map of the far left column (D) shows that the 10-year risk of GIST recurrence of a patient diagnosed with a 10 cm gastric GIST with five mitoses per 50 high power fields (HPFs) of the microscope and no rupture is 20–40%. The 10-year risk associated with a similar tumor when the mitosis count is ten per 50 HPFs increases to 40–60%. eGIST=extragastrointestinal stromal tumor (arising outside the gastrointestinal tract).

Note: These contour maps estimate the risk of recurrence for patients not taking Gleevec.

Information on Mutations in GIST

Contribute to Real World Evidence working toward a cure!