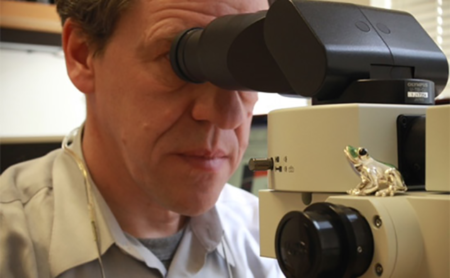 How GIST is diagnosed

The process of identifying a disease is known as diagnosis. To detect and diagnose gastrointestinal stromal tumor (GIST):

Biopsies are sometimes done at the time of surgery (surgical biopsy), but in many cases biopsies are done prior to surgery; sometimes, biopsies can be done during an endoscopy (endoscopic biopsy). In some cases, a needle biopsy (fine needle aspiration (FNA) is inserted through the skin and into the suspected tumor. Biopsies must be done carefully so as not to break apart the tumor, which might cause bleeding or possibly increase the risk of cancer spreading.

Once a pathologist has the tissue, he/she will look at various things including the appearance of the cells. They will also apply special stains to the tissue. These stains tell the pathologists whether or not particular proteins are present on the cell, helping to confirm the diagnosis of GIST. Further specialized testing, such as mutational testing, can help identify the subtype of GIST and is required by today’s standards such as NCCN and EORTC guidelines.

The section below covers further details about the diagnosis of GIST. Identifying the type of cell from which a cancer has developed is a specialized art. The doctors who make these judgments are pathologists, and their job is absolutely critical. The oncologist depends on the pathologist to help determine the type of cancer, so that he/she can plan the best course of treatment.

The pathology and diagnosis of GIST are now well understood. Given the importance of the task of the pathologist, newly diagnosed GIST patients may wish to consider obtaining a second opinion of their pathology reports (unless the pathology was initially done by a pathologist who was very experienced with GIST). While many pathologists may be able to accurately diagnose GIST now, predicting the behavior of GIST can be difficult. Experience is important here. A team of doctors and pathologists who are all experienced with GIST will often be better able to develop and implement a specific treatment plan based on each patient’s unique situation. 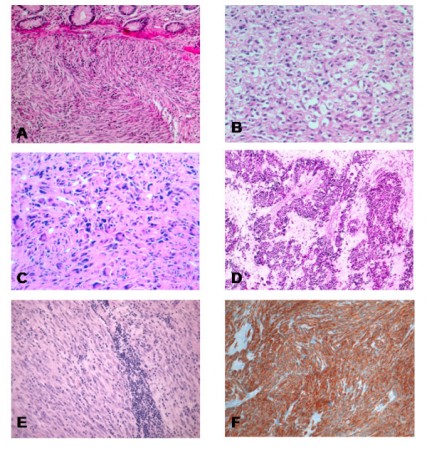 Tissue samples from the biopsy procedure are prepared, from which thin layers of tissue sections are cut and mounted on slides for staining and examination under the microscope.

One method that the pathologist utilizes to classify tissues is called immunohistochemistry (IHC). Using this technique, the pathologist applies various antibodies to the tissues. Each antibody binds to specific features (proteins) on the cell surface. The most important antibody that is applied when GIST is suspected is the KIT antibody. When these antibodies bind to their specific target on the cell surface they produce a “stain” or change in color of the tissue sample. So when the KIT antibody is applied, if the cell surface has the KIT protein present on the surface, the sample will “stain positive”. This is what is known as “KIT positive” which means that this cell has KIT receptors on its surface.

With rare exceptions, GIST tumors will stain positive for KIT. This means that the cell is manufacturing or using the KIT protein. In the case of KIT, this protein is a receptor. DOG1 is even a slightly more specific antibody for identifying GIST. Treament guidelines updated this year (2019) now require testing for SDHB for all newly diagnosed patients with stomach tumors and should also be done for patients with partial mutational testing that had no mutation in KIT and PDGFRA (KIT/PDGFRA WT), but had no further mutational testing.

Based on immunohistochemical staining, the properties of GIST cells can be summarized as follows:

In approximately 4% of cases KIT is negative by IHC. These KIT-negative cases likely have cells that do not look the same as most GIST cells and may contain PDGFRA (platelet-derived growth factor receptor alpha) mutations (Antonescu, 2008).

Note: There is an important distinction between IHC KIT-negative GIST and KIT-mutation-negative GIST. IHC is a test that stains for the protein whereas a mutation test looks for a mutation in a specific gene (KIT, PDGFRA, BRAF, etc). Even when there is no mutation in the KIT gene, a GIST will almost always express the KIT protein. Because referring to negative or positive is often confused with similar terms to IHC, we prefer not to refer to mutation testing results as positive or negative and the preferred terms are mutated or not mutated.

Molecular genetic testing is analysis of the DNA from the tumor sample. In GIST, it is also a clinically useful technique that may affect the oncologist’s choice of therapies. Molecular genetic analysis of GIST is important because of the availability of drug therapies that specifically target the KIT/PDGFRA receptor kinases. These drugs belong to the class of tyrosine kinase inhibitors (TKI), such as imatinib, sunitinib, and regorafenib.

Approximately 85% of GISTs contain oncogenic mutations in either (mutually exclusive) the KIT or PDGFRA tyrosine kinase receptor (Corless & Heinrich, 2008; Miettinen & Lasota, 2006). About 12% to 15% of all GISTs have no detectable KIT or PDGFRA mutations. These are known as KIT/PDGFRA WT tumors. Less than 5% of GISTs occur in the setting of syndromic diseases, such as neurofibromatosis type 1 (NF1), Carney triad syndrome, and other familial diseases (Corless & Heinrich, 2008).

Find out your Risk of Recurrence