Knowing Your Mutation and Biomarker Testing 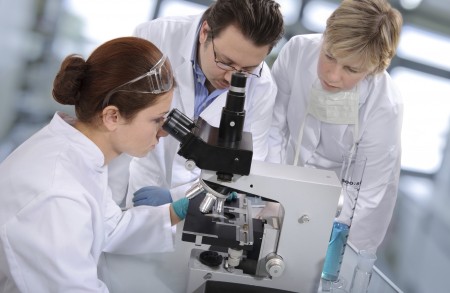 Please note – Whether you have already had biomarker (mutational testing), or you have heard about it from others, it can be very confusing wading through the significance of the diagnostic tools for GIST.  For help navigating through the terminology and treatment questions throughout your GIST journey you can call our Patient Registry Department at 973-837-9092 or email:  patientregistrydepartment@liferaftgroup.org

The Importance of Biomarker (Mutational) Testing

Why is biomarker(mutational) testing so important? Knowing the driving force behind each individual’s tumors is not just important, it’s critical. Despite this, GIST biomarker/ mutational testing rates are poor, with only about 6% of patients having received a test in the US in 2010, and although it’s possible that percentage has increased a little bit since then, we still have a long way to go. Even in the Life Raft Group Patient Registry, a group of extremely proactive patients, only about 50% of living patients know their mutation.

What do I need to consider as a GIST patient? Having biomarker/mutational testing done is the most important step your oncologist can take to determine the best possible targeted treatment. When the specific mutation driving your cancer is known, the doctor can personalize your treatment, and assure that you are receiving the most effective standard of care.

We talk about GIST patient concerns in this video:

All GIST patients being considered for drug therapy should have biomarker (mutational testing).

Why is there such confusion over the terms ‘biomarker testing’, ‘mutational testing’, or ‘genomic sequencing’?
There are several terms used for the tests to determine what mutation or biomarker is associated with a particular cancer. The differences in terminology refer to a wide array of cancer screening panels and their focus and range of testing. GIST is not a one-size-fits-all type of cancer.  There are several types of mutations that cause GIST. Each patient is an individual, and there are many factors that go into deciding what tests you should have.

We talk about terminology in cancer testing in this video:

What is a biomarker?
A biomarker is a characteristic of the body that you can measure that can be used for diagnosis, prognosis, or treatment of a disease. In simple terms, your blood pressure is a biomarker for high blood pressure. Identifying these biomarkers provides valuable information. Cancer biomarkers can include gene mutations (changes), gene rearrangements, proteins, extra copies of genes, missing genes and other molecules. 1

Biomarker Testing refers to the analysis of neoplastic tissue to look for relevant mutations, genetic alterations, proteins and other things that can be analyzed and/or measured. Biomarker testing is used to identify unique DNA alterations or changes within cancer cells that determine how a tumor behaves and grows and what therapies might be used to treat it.

When an oncologist knows the specific mutation(s) or biomarkers that are driving your cancer, they can personalize your treatment and assure that you are receiving the most effective standard of care. And although testing at the beginning of one’s treatment journey is important, it may also be done again if the cancer recurs, as it may be a different mutation that is driving new cancer growth.

A driver mutation is a mutation within the cancer that is believed to have a key role in a specific cancer. These mutations occur from damage to genes in an individual cell during an individual’s life and for GIST the cause of that damage is unknown. Mutations are abnormal changes in genes, and these abnormalities cause cancer by making abnormal proteins that cause the cells in the body to grow when they are not supposed to.

Different types of mutations can cause different types of cancer. Each patient is an individual, and there are many factors that go into deciding what tests you should have. Mutational testing is an advance form of biomarker testing that looks for broken genes. Mutational testing is ordered to obtain more information to guide diagnosis, determine prognosis and to predict the course of your disease.

Mutational Testing and Treatment in GIST

The first step in confirming a GIST diagnosis is immunohistochemistry, staining to identify the expression of the KIT protein in tumor cells. The presence of positive staining (immunohistochemistry) on KIT and DOG1 proteins is a diagnostic marker of GIST.

After your pathologist has confirmed your GIST diagnosis, the pathologist will send the results to your treating oncologist.

After assessing your risk/stage, they will recommend next steps for your treatment. Surgery is the gold-standard treatment for GIST. If your tumor(s) is resectable, then surgery will be performed. After surgery, if adjuvant therapy is recommended, biomarker testing (mutational testing) is required to identify your mutation type and to ensure that you are on the right treatment at the correct dosage. The most common type of biomarker/mutational testing is that which tests for specific genes or biomarkers. In this case, you are usually tested first for KIT and PDGFRA (the most commonly mutated genes in GIST.) If the results from this test show no mutation in KIT or PDGFRA (also known as wildtype) then advanced biomarker testing should be performed to find the oncogene that is driving your GIST. Advanced testing analyzes a wide range of genes (~ 200 – 800 genes). The most common mutations/biomarkers of this test are: SDHx, NF1, BRAF, or sometimes a gene fusion called NTRK.

In some mutations, like SDH, genetic testing for an inherited mutations is recommended. The difference between these tests is that this test does not test your “tumor tissue”. Instead, it tests your “normal tissue”. Germline mutations are present in every cell of the body so patients with germline mutations often have cancer syndromes and develop multiple types of cancer. Some germline mutations arise spontaneously while others are passed down from parent to offspring. SDH and NF1 GISTs are examples of germline mutations that arise spontaneously while familial GIST with KIT mutations are familial and handed down from parent to child (a very rare occurrence). SDHx or NF1 mutations may have a cancer syndrome with multiple types of cancers and should have additional genetic counseling to determine if they need surveillance for other cancer types.

Basic biomarker testing is testing for the primary mutation ­­in KIT and PDGFRA genes. This testing will find the basic driver mutation for about 85% of all GIST patients and for them, no further mutational testing will be needed.

This testing will identify patients with the most common mutations, such as the highly imatinib-sensitive KIT exon 11 mutations, those needing a higher dose of imatinib (KIT exon 9 mutations) and those with PDGFRA exon 18 D842V mutations requiring avapritinib. All GIST patients being considere­d for drug therapy that have sufficient tissue for testing should have this test. 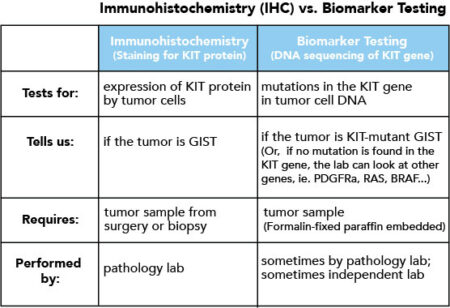 For all GIST patients where a mutation is not found with basic testing, advanced biomarker (mutational) testing will be required. Many oncologists are doing further advanced testing such as Comprehensive Cancer Genomic testing to test several hundred genes for mutations that the focused tests overlook.

This may require a very high degree of advocacy from the patient and/or the patient’s doctor. The Life Raft Group can direct you to more detailed information about GISTs that are negative for KIT and PDGFRA mutations and how to advocate for the testing.

About 15% of GIST patients will not have a mutation in the KIT or PDGFRA gene. This will be discovered in basic diagnostic testing which tests for mutations in these two genes. These patients are said to be KIT/PDGFRA WT or often just “wildtype GIST”. While in the past this term was mostly utilized to indicate a patient who didn’t need medication, as there were really no treatment options for patients beyond the common KIT and PDGFRA mutations, that has changed in recent years with some effective off-label treatments and medications that are currently in clinical trials for some of these rarer mutations, further highlighting the necessity of these advanced tests.

The first step to identify one of the largest of the KIT/PDGFRA WT groups is actually a tissue stain (immunohistochemical stain done by a pathologist). In the majority of the cases, SDH-deficient GISTs can be identified by a lack of staining of the SDHB protein which is lost in patients with SDH GISTs. A negative SDHB stain indicates some type of SDH-deficiency which can be classified by further biomarker/mutational testing. The National Institutes of Health (NIH) in the U.S. is one of the best sources for this type of testing. One thing to be aware of is that the SDHB stain is rarely used in most pathology labs, so finding someone to perform this test may require going to a specialized large academic center.

Although we list SDHB staining as a first step, it’s possible to do staining and genetic steps at the same time.

If the SDHB stain comes back as SDHB positive, it means you don’t have SDH-deficient GIST and additional testing is needed to identify the specific subtype of GIST (e.g., NF1 or BRAF GIST). This is highly specialized and some centers test for multiple mutations at the same time. A few of these tests are further specialized to look for rare mutations found in GIST.

There are several subtypes of GIST, and newer targets are discovered all the time. There are newer forms of advanced testing like circulating tumor DNA (ctDNA) that will help to understand the complexity of your disease and which types of GIST will respond best to different treatments.

These GIST experts talk about the importance of testing for cancer patients:

How to Order a Basic Mutational Test

Requests for KIT and PDGFRA mutation screening must originate from a pathologist or treating physician. One paraffin block of the tumor (either biopsy or surgical specimen) or about 10 unstained tissue sections of the tumor are typically needed (verify with lab). For further information on how to get a mutational test, please contact our Patient Registry Director, Denisse Montoya at 973-837-9092 or dmontoya@liferaftgroup.org

Not all these services may be available internationally. Please call the LRG if you need guidance on getting tested.

**The Life Raft Group could assist you in the testing process

More information on Mutations in GIST