Introduction to mutations in GIST 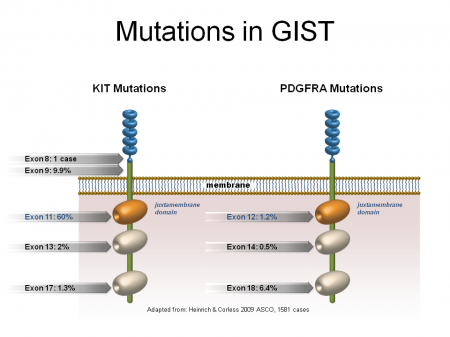 The cells in the human body each contain instructions for making the building blocks that make up the body. These instructions are contained in the DNA and are organized into genes; one gene for each protein, about 30,000 genes in all.

New cells are created when existing cells divide. Sometimes errors in copying the DNA occur during the cell division process. Usually, these errors are corrected, or the cell is destroyed so that the errors are not passed on to new cells. Sometimes however, errors (mutations) can be passed on to the new cell and each new generation of cells. If enough critical errors occur, the cell may stop following the rules that normal cells live by and the beginning stages of cancer can occur.

GIST was one of the first and most powerful examples in the cancer world that the mutated gene(s) driving the cancer is more important than the location of the tumor. Most of today’s cancer therapies are designed to address the results of gene mutations.

In GIST, the most common genes with mutations known or believed to be the driver mutations in GIST are:

Exon 11 – This is the most commonly mutated exon in GIST. Exon 11 mutations are found in about 60-65% of cases. Mutations in exon 11 generally respond to treatment with Gleevec better than mutations in other exons.

Some GIST tumor cells do not contain c-kit mutations. In about 5-8% of all GIST cases, a closely related gene, PDGFRA, is mutated. About 1/3 of the PDGFRA mutations may still respond to Gleevec and/or Sutent/Stivarga, but up to 2/3 of PDGFRA mutations do not respond to these drugs. These non-responsive mutations occur in one specific spot in exon 18 of the gene and are called a D842V mutation (PDGFRA mutation, exon 18, D842V). Several clinical trials for D842V inhibitors are in clinical trials for advanced/metastatic GIST with good to excellent early results.

Note: This GIST type has been commonly known as “wildtype GIST”, but is recently recognized as “No Other Specified” or NOS.

GIST tumors that do not have a mutation in KIT or PDGFRA have, in the past, been called “wildtype” GIST. Wildtype actually means that the gene in question is normal, so a “wildtype GIST” doesn’t really make sense.  It was originally used to indicate that the KIT gene was normal and starting in 2003 (when PDGFRA mutations were discovered), the term wildtype GIST meant that a patient was tested for both KIT and PDGFRA mutations and none were found, thus, KIT and PDGFRA were “wildtype” or normal. This is often abbreviated as KIT/PDGFRA WT (wildtype).

Beginning in 2007, researchers have learned a lot more about this type of GIST. In fact, this group actually has a number of different driver mutations and it is no longer acceptable to stop testing after KIT/PDGFRA testing.

In most cases, if mutational testing is done, it stops after testing the KIT and PDGFRA genes, so if there is no mutation found in those two genes, the patient does not actually know their mutation. This is incomplete testing since as of 2018, we actually know quite a bit about the mutations these patients are likely to have. They include: