Mutational Testing in GIST is a vital component for survival, especially as cancer treatment becomes more individualized. In this webcast, Dr. Chris Corless, Director and Chief Medical Officer of the Knight Diagnostic Laboratories at OHSU, demystifies the process by which pathologists make the diagnosis of GIST and assess the risk of recurrence. Dr. Corless discusses how tumor DNA is extracted and analyzed from these tumors, and how mutations detected in tumor DNA influences treatment decisions.
LISTEN to the WEbcast
Webcast with Spanish subtitles provided 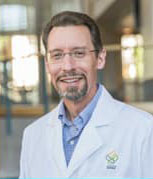 After undergraduate studies at the Univ. of California, Berkeley, Dr. Corless received his MD and PhD degrees from Washington University, St. Louis. He did his residency training in Anatomic Pathology at the Brigham & Women’s Hospital, Boston, where he also completed fellowship training in GI Pathology and GU Pathology. He joined the faculty of Oregon Health & Science University in 1994 and was promoted to Professor in 2004. During his career he has served as the residency program director in Pathology and medical director of surgical pathology for OHSU Hospital. He is presently the Director and Chief Medical Officer of the Knight Diagnostic Laboratories at OHSU. An author on over 260 publications, Dr. Corless has expertise in the application of molecular diagnostics to the classification and prognostication of solid tumors.

Disclaimer: Information provided in this webcast is not intended as a substitute for your physician’s guidance and care.