Understanding drug classes is important. Many new cancer drugs are entering clinical practice and clinical trials. Many GIST patients are no longer responding to Gleevec or Sutent and thus are looking for clinical trials. Understanding strategies and grouping these new drugs into classes with other similar drugs may help patients understand some of their choices. For additional information see the article by Dr. Jonathan Fletcher in the January 2007 edition of The Life Raft Group newsletter.

The classes of drugs we are talking about are related to one or more strategies to treat GIST. Other strategies may emerge over time, but for now these strategies include:

Drug Class: KIT/PDGFRA
This class of drugs includes Gleevec, the drug that is approved for first-line treatment of metastatic GIST. Even in Gleevec-resistant GIST, Gleevec is sometimes used in combination with other drugs and in the absence of another therapy. This is because many tumors may still be sensitive to Gleevec resulting in a slowing of tumor progression. 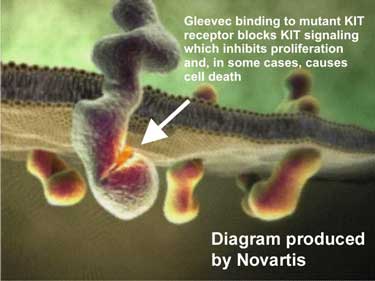 One of the primary ways that drugs in this class hope to overcome Gleevec resistance is by inhibiting the secondary mutations that are the primary cause of resistance. Secondary KIT (or PDGFRA) mutations, especially in exons 13, 14 and 17, prevent Gleevec from being able to bind to the mutant receptor. Drugs that can bind to the KIT receptor, in spite of the secondary mutations, may overcome Gleevec-resistance.

Drugs in this class include Gleevec for first-line therapy, Tasigna (nilotinib) and Sprycel (dasatinib). There are also many other KIT/PDGFRA inhibitors in various stages of development. Masitinib is in phase III trials to see how it compares to Gleevec for first-line use. Most multi-targeted tyrosine kinase inhibitors also inhibit KIT and PDGFRA signaling, but they also add VEGF inhibition (see next section).

Drug Class: KIT/PDGFRA/VEGF inhibitors a.k.a. Multi-targeted Tyrosine Kinase Inhibitors
This class of drug is similar to the KIT/PDGFRA inhibitors, except that they also inhibit one or more of the vascular endothelial growth factor receptors (VEGFR). They may also inhibit additional targets whose role in GIST is undetermined (such as RET). VEGFRs play an important role in the growth of new blood vessels in the body (angiogenesis). Without the growth of new blood vessels, tumors cannot grow beyond a few millimeters in size.

In addition to their antiangiogenic effects, drugs in this class may also fit into the binding pocket of KIT (or PDGFRA) differently than Gleevec. To be effective against Gleevec-resistant GIST, it is widely believed that, in addition to their antiangiogenic effects, these drugs must also be effective at inhibiting the secondary mutations that cause Gleevec-resistance. The effects of multi-drug resistance proteins on drugs in this class have generally not been well characterized in the literature.

Approved drugs in this class include:

Drugs in this class that are not approved, but are in clinical trials include:

Drug Class: VEGF monoclonal antibody inhibitor
In addition to being able to be inhibited by tyrosine kinase inhibitors (like Sutent), VEGF signaling can be inhibited in other ways as well. One method is to use a drug that binds to the exterior portion of the VEGF receptor(s) and prevents the binding of the VEGF growth factor(s) to the VEGF receptor. Avastin is a drug in this class that is approved for colon cancer. A phase III trial that combines Avastin and Gleevec compared to Gleevec alone was terminated due to low enrollment.

Drug Class: HSP90 inhibitors
Heat Shock Protein 90 (Hsp90) is a protein that has several functions in cells. It is an emerging therapeutic target of interest for the treatment of cancer. Proteins are the mainstay of structural and signaling elements of all cells. Hsp90 is a molecule that maintains the conformation and activity of specific proteins in the cell, also called “client proteins” of Hsp90. KIT is one of the client proteins of Hsp90. Hsp90 enables cancer cell survival by maintaining the function of their mutated client proteins including the KIT and PDGFRA proteins in GIST. Inhibition of Hsp90 therefore has the potential to destroy the activated KIT/PDGFRA proteins resulting in a therapeutic effect in GIST. Since the target of these drugs is Hsp90 and not KIT or PDGFRA, they should be unaffected by the secondary mutations that commonly cause resistance to Gleevec. In fact, preliminary work has suggested that the stronger KIT is activated, the better they work.

Drugs in this class include:

17-DMAG
17AAG-In phase I and phase II trials for a variety of cancers. This drug has poor solubility.
KOS-1022 – An oral or I. V. drug in phase I trials for solid tumors.

Strategy: Inhibit the production of KIT (and possibly other important proteins)

Class: Transcription inhibitors
While flavopiridol is widely known as an inhibitor of cyclin-dependent kinase (CDK2 and CDK1), its effects may be mediated more by inhibition of transcription than anything else (Cell Cycle review, December 2004).

Work done at Memorial Sloan-Kettering found that in a GIST cell line, total KIT protein was significantly diminished in flavopiridol-treated cells after 24 hours. This resulted in an indirect reduction in KIT autophosphorylation (activation), comparable to Gleevec. They confirmed that transcriptional downregulation was the reason for reduced total KIT protein. They also found that flavopiridol, at clinically achievable doses, induces a high level of apoptosis (cell death) in GIST cells. They believe their findings justify a clinical evaluation of flavopiridol in treating patients with Gleevec-resistant GIST.

A combination of flavopiridol and doxorubicin is in phase I trials for Sarcoma. This trial also allows GIST patients. The study is ongoing, but not recruiting participants (2012).

Classes: The drugs using this strategy come from several different classes.
Targeting signals downstream from KIT and PDGFRA is one strategy being investigated for Gleevec-resistant GIST and for many cancers in general. Some of the most promising targets appear to be:
PI3K – However, because of its widespread use in the human body, it may be a difficult protein to target.
PKC theta – Remains a desirable target, but we are unaware of any drugs that currently target PKC theta.
AKT – A protein involved in the prevention of apoptosis (it may have other functions as well).
mTOR – Inhibiting mTOR may have multiple effects in cancer cells. mTOR is involved in cell growth, angiogenesis and cellular survival. A phase I/II trial for the mTOR inhibitor RAD001 + Gleevec is ongoing in GIST. It is unclear if this trial will proceed to more advanced stages. There are at least 3 other mTOR inhibitors either approved (Rapamune) or in clinical trials. In one study of 108 samples of tissue from patients, mTOR was activated more often in PDGFRA mutations and in wild-type GIST than in KIT mutate GISTs.2
BCL-2 – This protein is an important anti-apoptosis protein. A phase II GIST trial combining Gleevec with an antisense inhibitor of bcl-2 was unsuccessful.

Class: HDAC inhibitors
Work presented at the Life Fest meeting in Dallas, showed that a histone deacetylase (HDAC) inhibitor was able to cause significant regression in a Gleevec-resistant xenografts model (mouse model). HDAC inhibitors are a new class of drugs that have shown anti-cancer activity in three major ways:

Another way that HDAC inhibitors might accomplish their effects is by “turning on” some tumor suppressor genes that have been silenced.

HDAC inhibitors are in various stages of development. LBH589 (panobinostat) in combination with Glivec is in a phase I trial for GIST in Germany.

IGF-1R is a tyrosine kinase that, much like KIT, protrudes through the cell surface and begins to signal when an extracellular Insulin Growth Factor (IGF1) attaches to the outside portion of the receptor. Unlike KIT, IGF-1R has not been found to be mutated in GIST. However, IGF-1R has been found to be over-expressed in wildtype GIST tumor tissue. Up to now, KIT inhibitors have had limited impact in wild type GIST. IGF-1R is now viewed as a component of a potential “side channel” providing an alternative signaling path to KIT and potentially a target in GIST.IGF1-R overexpression might be limited to the pediatric-like GIST version of wildtype GIST (SDH-deficient GIST).