A National Cancer Institute team led by Paul Meltzer recently published a paper in Science and Translational Medicine entitled, “Recurrent epimutation of SDHC in gastrointestinal stromal tumors.” The findings have some potential implications for GIST patients, particularly those who are SDH-deficient.

The study looked at SDH-deficient tumors from 59 patients, ranging in age from seven to 57 years at diagnosis. They identified a known SDH mutation in either SDHA, SDHB, SDHC or SDHD (called SDHX Mutant GIST) in 43 and no SDH mutation (wild type) in 16. The researchers found that the 16 wild type patients (27%) had an “epimutation” in the promoter area of the SDHC gene. “Epi- “means “above or over.” In this case the epimutation is in the methylation structure or packaging surrounding the actual gene molecule and not the gene itself, so there is no exon. Gene methylation is a natural condition which determines which genes are expressed. Hypermethylation indicates a gene that is over-methylated and is not able to be expressed normally. SDHC is part of the SDH complex which requires normal expression of all components in order for the complex to function. This means that the SDH complex was not able to function normally in these patients. A disrupted SDH complex leads to disrupted cell metabolism and to cell growth and blood vessel growth and has been identified as a cause of tumorgenesis in a number of cancers. This SDHC epimutation was the only defect that was found for these 16 patients. Additionally four patients who had SDHC gene mutations also had evidence of the SDHC epimutation. Interestingly, of the eight patients in the study with Carney’s Triad, six of them (75%) had the epimutation. 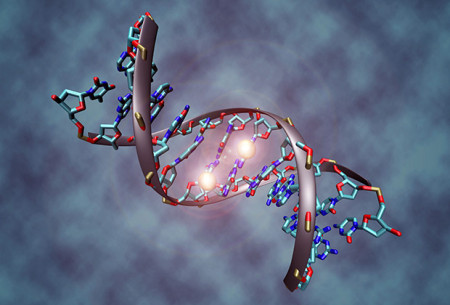 These findings have a number of implications:

The LRG was proud to provide some of the funding for this study. The next step would be to begin clinical trials for treatments designed to counter the hypermethylation. When these trials have begun, we will be sure to keep you informed, and will also list any trials in the clinical trials database on the LRG website: liferaftgroup.org/gist-clinical-trials/.

Illustration of a DNA molecule that is methylated at the two center cytosines.
Artwork by Christoph Bock (Max Planck Institute for Informatics) http://commons. wikimedia.org/wiki/File:DNA_methylation.jpg