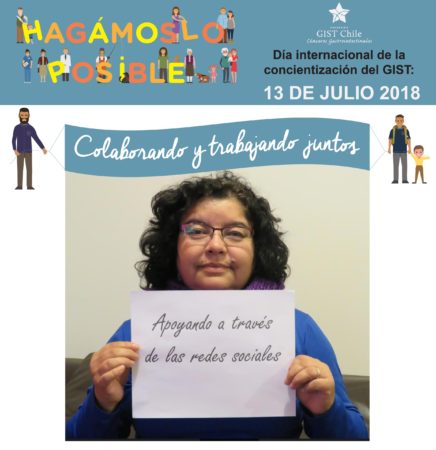 Alianza GIST and Fundacion GIST Chile are going all out to raise awareness for GIST Awareness Day. Launched in 2014, GIST Awareness Day is a global effort to bring awareness about GIST, (Gastrointestinal Stromal Tumor), a rare disease. It is celebrated on July 13 of every year. July is Sarcoma Awareness month

In support of the LRG’s “GIST Do It” campaign, they translated it into “Hagamoslo Posible”, which means “Let’s Make it Possible.” This refers to making it possible to receive diagnosis and treatments for all GIST patients. Their hashtags are #GISThagamosloposible, #GISTawarenessday and #GISTDOIT.

Every day they will be posting photos with messages of how people can make it possible.

On July 13th, they will launch a video entitled “Hagamoslo Posible” on social media. It will reflect the needs of GIST patients to have access to treatments.

I have been invited by Dr. Marcelo Garrido to speak at a meeting of the Oncology Department of the Clinical Hospital of the Cathloic University, to doctors, nurses and students about GIST and about the work of Fundacion GIST and about her advocacy work at the LRG, and the Salud con Datos Project. She will begin her presentation with the Hagamoslo Posible video.

If the weather allows it, GIST Chile will have a patient meeting to engage them on how they can collaborate to “Make it possible”.

4th Anniversary of Fundación GIST Chile and end of the campaign “HAGÁMOSLO POSIBLE”.

We are having a meeting with two panel discussions, to which they have invited the main representatives of the health actors in Chile.

It will be moderated by a very known journalist, and the idea is talk or the importance of the collaborative work of all actors, including patients in making health decisions.

Dr. Garrido will present the Salud con Datos Project: Regional GIST Patient Registry as an outcome of a collaborative work

The two panels are: