Skip to content
Home/Sisters of the Heart for a Cure

Sisters of the Heart for a Cure 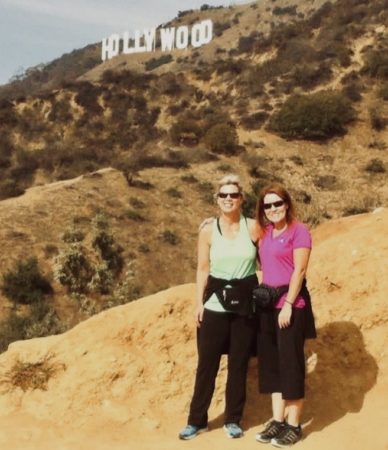 Wendy Williams became a member of The Life Raft Group in August of 2017. She was introduced to the LRG by one of her closest friends, Michelle MacLea, whose son Connor was diagnosed with SDH-deficient GIST in 2017. Wendy and Michelle met in a Lamaze class when they were pregnant with their first children. From there, a lifelong friendship began. Their eldest children were born a day apart and their second-born children three months apart, so their families are very close.

Wendy joined our community so she could learn more about GIST for herself. Through reading materials from our website, newsletter, and the ListServ email community, both Wendy and Michelle gained knowledge about GIST while establishing a strong sense of community with the LRG.

In a recent interview, Wendy shared that in the beginning one of the obstacles Michelle faced was finding the best care for Connor (who has SDH-deficient GIST.) There is not always an open line of communication between doctors and GIST Specialists. What stood out to her was the amount of coordination and data collection that the LRG provides utilizing tools such as the LRG Patient Registry and GIST Collaborative Tissue Bank.

Wendy said, “With SDH-deficient GIST, there is more of an unknown because the lines of treatment are even more obscure. The wealth of information the LRG provides is unmatched. The staff is warm and welcoming and really wanted to help me learn. The work the LRG does helps others feel a great sense of community which allows others suffering from GIST know that they are not alone.”

Michelle and her family began their campaign to spread awareness about GIST by passing out LRG bracelets and pamphlets to her community. Wendy knew she wanted to do more. Through her real estate business, she began donating ten percent of her sales commissions, which was the beginning of her fundraising campaign Bring Home a Cure for Connor. Through this effort, Wendy is helping to raise funds for #GISTresearch and also spreading awareness about GIST to people who have never heard of this rare cancer.

“I knew that donating these funds for research would help other families who have the same struggles,” said Wendy.

When Wendy first began, Bring Home a Cure for Connor, she explained it was not an overnight process. It began with creating a name and a logo. She worked with members of the LRG regarding the idea and GIST materials, and with marketing consultants to brainstorm different ideas. With these resources, she was able to come up with a concept that has a connection to what she does for a living.

Once the basics were in place she met with Michelle for her consent. Wendy remembers a heartfelt moment telling Michelle, “If nothing else, my goal is to give you a sense of support. At the end of the day, if you feel that…then I have succeeded.”

Wendy commented on the process of beginning a fundraising effort: “When people join together and move forward with a sense of innocence, a sincere willingness for what could or might happen, things blossom, and in a true form that’s where miracles come from. There is not always a textbook answer, but when you combine genuine people with a fundamental mutual goal the universe can align.”

She cites the formation of the Pediatric & SDH-Deficient GIST Consortium that was spearheaded by the Life Raft Group as an “unbelievably important” research effort, stating, “Who else is doing something like this?”

Wendy believes that the more support you can have when you’re facing a GIST diagnosis makes a difference. “Maybe at first it is hard to reach out if you are a more private person, but you never know what information others provide that might be meaningful or be exactly what you need to hear. Being a part of the LRG community will help provide you with information and connect you to others facing GIST so you will never be alone.”

The Life Raft Group is grateful for the continued support and generosity Wendy has shown LRG Community!