Team meetings are critical to the research process funded by the LRG, which is built on a foundation of collaboration and cooperation. These meetings help accelerate the research process by minimizing duplicative efforts and maximizing team work. The impressive brain power of the team provides for a creative meeting environment where researchers share ideas and work together to identify new areas of investigation and help each other interpret research findings. In fact, progress on a number of collaborative projects, identified only four months ago at the Portland meeting, was reported in Boston, demonstrating how important is in to have regular in-person meetings where true cross-fertilization of ideas can occur. 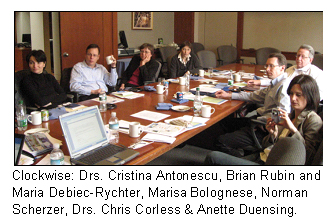 A number of interesting findings were presented by the research team. Tumors range from simple gain/loss by chromosome profile to highly complex in GIST. Some chromosomal losses produce highly aggressive tumors. Other genomic data was presented including amplification regions (genes that might make too much of a particular protein) and deleted regions (tumor suppressor genes that are missing/non-functional). Drug testing in cell lines and mouse models is progressing. Of note, some of the newer HSP90 inhibitors, such as 17AAG, are significantly more potent that earlier inhibitors. Several new drug combinations appear to be headed towards phase I clinical trials.

A problem is posed

One of the most urgent ongoing needs expressed by the team was for GIST tissue samples. Even more vital was that these tissue samples be tied to a patient’s clinical history. Unfortunately, when researchers are able to acquire tissue, HIPAA patient privacy regulations make it virtually impossible for researchers to have the patient’s complete clinical history. It is also uncommon for researchers from different institutions to share results of experiments conducted on these tissues. In Portland we began exploring ways to solve these problems. At the Boston meeting we were able to finalize a process to accomplish both goals: provide ongoing GIST tissue linked to clinical histories and find a way to share research results.

Since its inception, the LRG has been maintaining an extensive GIST patient registry which cuts across institutional and geographical boundaries by collecting information from patients. Today, with over 1,000 GIST patient clinical histories, it is the largest database of its kind in the world. Working together with our research team, the LRG devised a system to integrate this patient-based registry with our lab-based research efforts. The key is patient submission of paraffin tissue blocks. These tissue samples are on file in the pathology labs where patients had their surgeries and they remain archived by law. Tissues are typically required to be held for five to six years, but this varies by state. By having patients send their paraffin tissue blocks to the LRG, who in turn will send it to the research team (without personal information to comply with research privacy regulation), researchers will have GIST tissue linked to patient clinical histories for the very first time. This unique project will allow researchers to analyze tissues in ways that have never been possible before. For example, scientists will be able to compare primary tumor tissue and metastasized tumor tissue from individual patients and then look for genetic similarities in other patients. All samples will be shared with Dr. Chris Corless for mutational testing (To learn more about how tissue is processed in a lab, read Dr. Corless’s article on page 1).

Finally, the LRG and Stanford University have begun working on a shared data system so that results of this and other projects can be accessed by the entire research team via the Stanford Tissue Microarray online database, creating a truly integrated research effort. We are exploring ways to provide web access to this database so that patients and other GIST researchers from all over the world can see firsthand the results of hundreds of experiments.

As a result of the two team meetings and the collaborative efforts of the LRG Research Team members, a pilot program has begun. In the next few months the program will be open to all GIST patients who would like to donate tissue.

What’s ahead for the LRG Research Team

The Research Team is excited about the new projects that have come about from the collaborative and in-person meeting process. Over the next several months the Team will be continuing their investigations into the mechanisms of resistance and understanding how best they can promote apoptosis or the death of all GIST cancer cells. Areas of investigation include more potent inhibitors, stem cell markers, cellular adhesion, alternate activation pathways, genomic progression, new drug combinations and more.