STA-9090 is a synthetic, small molecule HSP90 inhibitor. It has a unique chemical structure different from earlier HSP-90 inhibitors that, like IPI-504, are first generation drugs based on a family of antibiotics called ansamycins. As a result, STA-9090 is likely to have a different toxicity profile.

HSP-90 inhibitors in GIST represent a new approach to managing resistance to traditional therapy. A quote from George Demetri, of Dana-Farber Cancer Center (DFCI) provides the rationale, “Once those two standard drugs (Gleevec and Sutent) fail, patients have a poor prognosis and very limited treatment options. HSP90 inhibition is a promising therapeutic approach for these patients because the mutated kinase proteins that are the cause of resistance to both Gleevec and Sutent depend upon being chaperoned and protected by the function of HSP90. STA- 9090 can potently inhibit the HSP90 function and disrupt the mutant signaling in multidrug-resistant GIST. Based on the preclinical and early clinical results seen to date, STA-9090 has the potential to unlock the true potential of HSP90 as a therapeutic target in GIST.”

In Synta’s lab, STA-9090 has been shown superior to both Gleevec and first generation HSP-90 inhibitors in cell lines expressing typical Gleevec sensitive mutations. In addition, in the slide from Dr. Jonathan Fletcher of Brigham and Women’s Hospital (Figure 1), STA- 9090 is shown to be roughly 10 times stronger than first generation HSP-90 inhibitor 17AAG in a GIST cell line containing a Gleevec resistant exon 11/17 mutation.

Dr. Fletcher is quoted in the press release about these results and the rationale for moving from the lab to the clinic for resistant GIST. 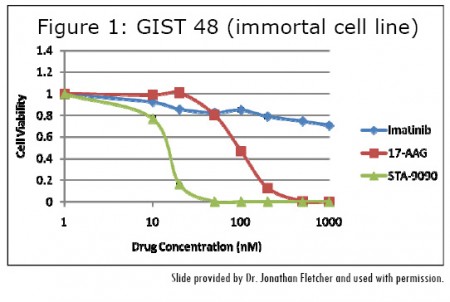 “We have shown that as many as eight different secondary KIT Gleevecresistance mutations can occur in different metastases from a single GIST patient whose disease has progressed after treatment with Gleevec, which poses a significant challenge for treating drugresistant GIST,” said Dr. Fletcher.

“Importantly, all of these different resistance mutations were still sensitive to STA-9090. In these studies, STA-9090 was also 5-15 fold more potent than 17- AAG, a first-generation, ansamycinfamily HSP90 inhibitor. Additionally, STA-9090 was active against GIST cells that were resistant to 17-AAG.”

To participate, patients must have failed both Gleevec and Sutent. Prior HSP-90 inhibitor treatment is allowed.

STA-9090 is an intravenous (IV) drug administered once weekly. Patients will therefore be required to be at the trial site weekly. According to Synta, “Subjects may request reimbursement for appropriate study related travel expenses incurred during participation. The details of this should be discussed with the Investigator and/or Study Coordinator at the participating institution.”

Patients will continue on the study until disease progression is measured on CT scans using the RECIST criteria.

Synta reported three GIST patients to date have taken STA-9090 in the phase I trials: This quote from Dr.Vojo Vukovic, Senior Vice President and Chief Medical Officer of Synta Pharmaceuticals refers to one of those three, “A particularly encouraging observation was that a GIST patient on our onceweekly dosing Phase I solid tumor study, who experienced disease progression while on multiple prior therapies, including Gleevec and Sutent, experienced substantial tumor shrinkage and stabilization of disease following treatment with STA-9090.”

Synta expects to report data from the ongoing STA 9090 phase I and II trials in the first half of 2010.

While these are encouraging early indications for STA-9090 the purpose of a phase II trial is to determine the effectiveness of a new treatment in a larger sample of patients.