Dr. Jean- Yves Blay at Centre Léon Bérard, Lyon, France, a noted GIST researcher and current president of the European Organization for Research and Treatment of Cancer (EORTC), presented the poster for the team that represented six centers in France and the manufacturer, AB Science in Paris.

Masitinib, an inhibitor of KIT, PDGFR, FGFR3 and Lyn/FAK has shown increased potency against common primary GIST mutations in 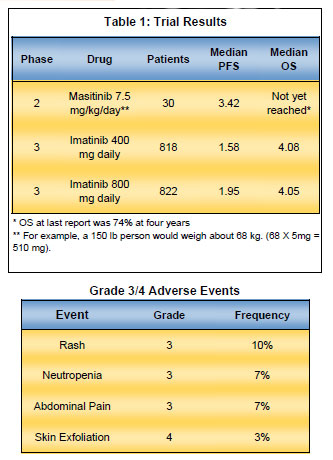 the lab. The phase II trial was designed to evaluate the efficacy and safety of oral Masitinib. From June 2005 to April 2007, 30 advanced GIST patients who had not received any prior drug were recruited. Nine patients are still under treatment. At four years after initial treatment the overall survival rate is 74 percent. However, the median overall survival has not been reached and patient data continues to be collected.

The results of this trial (Table 1) compare favorably with the ASCO 2007 report combining the results of the Phase III imatinib trials in the United States and Europe. Those trials compared two daily doses of imatinib, 400 mg and 800 mg. The key differences are an improvement in median progression-free survival (PFS) of over one year and the apparent advantage in overall survival (OS) at four years of 74 percent versus approximately 50 percent for the imatinib trials at relatively the same time point.

The caveats are that the Masitinib Phase II trial has a much smaller patient population than the Imatinib Phase III meta-analysis (30 versus 1,640). In addition the confidence limits currently reported for Masitinib median PFS (1.46 – NR) still include the median PFS reported for the imatinib trials (1.58 and 1.95).

Grade 3/4 adverse events reported can be seen in Table 2.

These promising results for the Phase II Masitinib trial support the ongoing randomized Phase III trial comparing Masitinb to Imatinib in the first line for locally advanced or metastatic GIST patients. That trial is currently recruiting patients at seven sites in the Unites States, 28 sites in France and seven sites in Lebanon. Patients and clinicians can check our trial listing for the latest information about the trial and about Masitinib.