Cellular origin of GIST from the “good” cells’ perspective

An Introduction to Interstitial Cells of the Gut 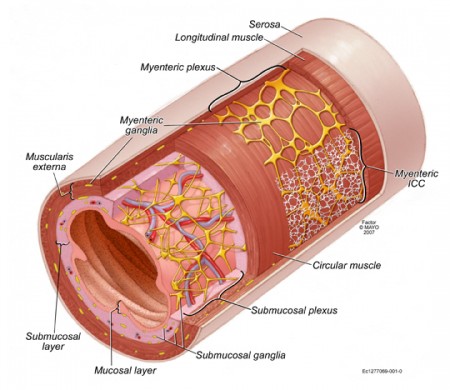 Interstitial Cells of the Gut

The discovery that gain-of-function mutations in KIT, the receptor for stem cell factor (SCF), underlie most GIST1 has forever changed the way this disease is diagnosed and led to the identification of imatinib (Gleevec) as its primary medical treatment option.2 The same study also proposed that transformation of interstitial cells of Cajal (ICC), KIT-dependent cells residing within the gut musculature,3 may represent the cellular source of GIST.1 A role for activating mutations in platelet-derived growth factor receptor a (PDGFRA) was reported in a subset of GIST lacking KIT mutations some years later.4 Since PDGFRA-expressing interstitial cells called ‘fibroblast-like cells’ (FLC) also reside in the gastrointestinal musculature, FLC have been proposed to be the source of PDGFRA-mutant GIST.5 While much effort has since been devoted to studying the nature and effects of various KIT and PDGFRA mutations, much less attention has been given to the proposed cells-of-origin of GIST. However, recent reports suggest that insights from the biology of gut interstitial cells may further our understanding of the pathogenesis of GIST: Firstly, a study by Chi et al.6 identified ETV1, a regulator of gene transcription expressed in subsets of ICC prone to oncogenic KIT-mediated transformation,7 as a key factor promoting GIST tumorigenesis. Secondly, our group described ICC progenitor/stem cells (ICC-SC) in the stomach of mice8 and found that transformed ICC-SC can give rise to imatinib-resistant tumors resembling GIST seen in imatinib-treated patients.9 Thirdly, the calcium-activated chloride channel anoctamin 1 (ANO1), which was first identified in GIST10 has been found to play an important role in ICC electrical activity11 and ICC proliferation.12 To promote better understanding of the biology of interstitial cells particularly as it pertains to GIST, this article reviews the physiological functions, development and maintenance of ICC and FLC and identifies some key questions for future research.

The main functions of the gastrointestinal tract are to secrete digestive juices, break down food components, absorb nutrients, reclaim water and excrete waste, which are performed by the mucosal lining of the gut (Figure 1). Due to the length of the digestive system (~30-33 ft or 9-10 m), these functions are highly compartmentalized, requiring precisely timed movement of contents from one segment to another. In addition, food also needs to be mixed with secretions and broken down into smaller pieces. These functions are executed by cells making up the muscular wall of the gut (Figure 1) with input from the central autonomic nervous system. Digestive functions do not require conscious control but rather depend on regulatory loops involving chemical (hormones, neurotransmitters), mechanical (stretch) and electrical signals and reflecting the coordinated actions of several cell types.

The mechanical work required for gastrointestinal motor functions is performed by smooth muscle cells, which are organized

into an inner circular and outer longitudinal layer (Figure 1). Unlike other muscles, smooth muscles can sustain contraction for a long time. The resultant tone permits both relaxation and further contraction. Contraction depends on entry of calcium ions from the extracellular space via ion channels responsive to electrical depolarization, i.e., loss of the electrical gradient across the cell membrane set up by ion pumps.13 Depolarization can be triggered by excitatory neural inputs or electrical signals from ICC; whereas hyperpolarization, which causes relaxation, is elicited by inhibitory neurotransmitters. Some ion channels are also directly regulated by mechanical stretch.14Since smooth muscle cells are interconnected by so-called gap junctions that allow the movement of ions from cell to cell, electrical changes occurring at one point can spread to entire muscle bundles.

The contractile activity of smooth muscles is regulated and organized into reflexes and stereotypic, migrating patterns by the enteric nervous system consisting of a large number (~108) of neurons and glial cells that form interconnected ganglia between the muscle layers (myenteric ganglia) and on the inner surface of the circular smooth muscle layer (submucosal ganglia) (Figure 1).15 Neurons can promote contraction or relaxation, regulate ICC or the secretion of digestive juices from the mucosal layer. Neurons can also carry sensory information to other neurons within the gut or to the central nervous system.

Both anatomically and functionally, ICC and other interstitial cells “slot in” between the smooth muscle cells and the enteric nerves. ICC and FLC residing within smooth muscle layers are spindle-shaped or elongated with few, fork-like branches (Figure 2A). They form synapse-like connections with nerves and electrical junctions with smooth muscle cells and also with other ICC and FLC.5,16 Intramuscular ICC mediate both excitatory and inhibitory neural signals to smooth muscle cells,16 whereas FLC transmit a specific form of inhibitory signals.17 ICC also regulate smooth muscle membrane potential by releasing the gaseous mediator carbon monoxide.18 In addition, certain intramuscular ICC contribute to sensory signaling by transmitting mechanical stimuli14 to the nervous system.19 These and other functions of ICC are supported by a specific pattern of gene expression.7

The majority of gastrointestinal smooth muscles exhibit rhythmic contractile activity driven by monotonous electrical oscillations called slow waves (Figure 2B).3 These oscillations are always present, even when the smooth muscle cells are not sensitized by excitatory inputs to respond to them with contractions. Electrical slow waves mainly originate from multipolar ICC forming networks surrounding the myenteric ganglia between the longitudinal and circular muscle layers (myenteric ICC; Figures 1 and 2A). The mechanisms of slow wave generation involve spontaneous “miniature” depolarization events arising from calcium cycling between intracellular organelles and the cytoplasm in the vicinity of the cell membrane, as well as voltage- and calcium-sensitive ion channels including ANO1, which mediates calcium-activated flow of chloride out of the cell. This ion flux then further depolarizes the membrane and leads to the summation of mini-events into the plateau of the slow wave. ANO1 is critical but not sufficient for slow wave generation.11 The upstroke of the slow wave also involves a voltage-sensitive ion channel, which can be activated by depolarizing stimulus from neighboring ICC. This communication is critical for orderly propagation of slow waves.20 When ICC networks are depleted, slow waves can diminish, disappear or become arrhythmic causing abnormal propagation (Figure 2)3,20,21 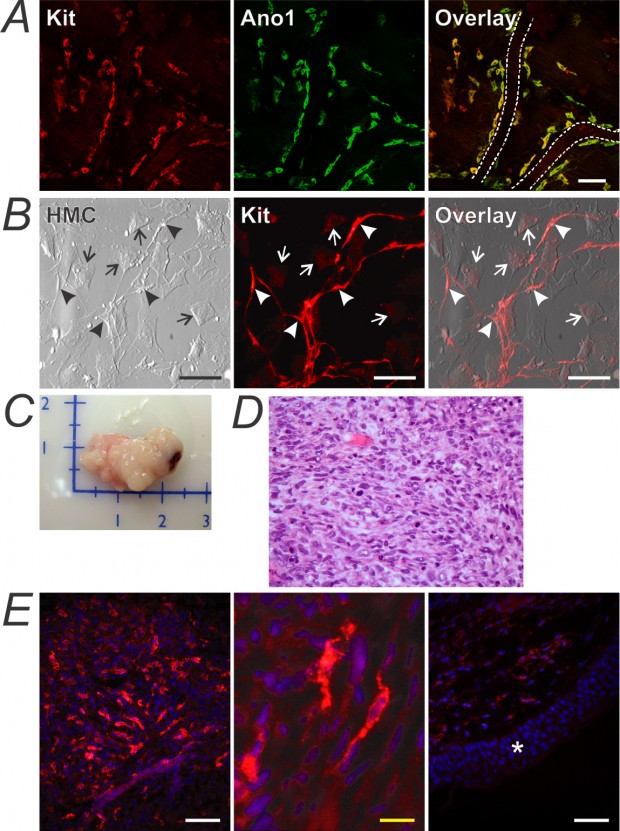 ICC are reduced in many diseases and conditions such as gastroparesis, slow-transit constipation,18 diabetes3 and aging21 (Figure 2). Depletion could result from cell loss, impaired regeneration or combination thereof. ICC have regenerative capacity that can restore their networks once the underlying cause has been corrected. The ICC-SC we identified8,9 may underlie this regenerative capacity, which is reduced with aging as both ICC-SC and ICC decline.21ICC-SC reside in the vicinity of small blood vessels (Figure 3) and also under the serosal lining of the stomach. They do not resemble ICC and express less KIT, ANO1 and other ICC-specific genes.8,9 In contrast, they express CD34, which is often found in GIST, and insulin-like growth factor 1 receptor (IGF1R), which is amplified in wild-type GIST.22Interestingly, they also express some PDGFRA raising the possibility that these cells are also precursors of FLC. Unlike mature ICC, ICC-SC display increased proliferation in response to IGF1 and soluble SCF but they do not depend on KIT signaling for maintenance.9 Their differentiation into ICC is stimulated by cell membrane-bound SCF and occurs spontaneously, albeit at a low rate, both in vitro and after transplantation into diabetic mice in vivo (Figure 3). We also found that after spontaneous transformation, isolated ICC-SC transplanted into immune-deficient mice gave rise to imatinib-resistant, KIT-low tumors resembling GIST seen in imatinib-treated patients with relatively few differentiated, ICC-like cells (Figure 3). Whether these cells also confer an inherent resistance to GIST in humans remains to be investigated.

In summary, recent data indicate that by studying normal ICC we can increase our understanding of the natural history of GIST and identify novel therapeutic principles. However, several questions remain: Firstly, do KIT-low ICC-SC exist in humans? Do they contribute to the failure of imatinib and related drugs to cure GIST? What is the relationship between ICC-SC, ICC and FLC? Do genes other than KIT which are selectively expressed by ICC contribute to GIST pathogenesis? Can these genes be targeted pharmacologically? Answering these and many other questions will require that we not only focus the “bad” cells but also their “good” counterparts.

Figure 2. Depletion of ICC and reduction of slow wave amplitudes in the stomach of prematurely aged mice deficient in the anti-aging peptide Klotho. A, Representative images of KIT+ ICC in the longitudinal muscle (LM), myenteric region (MY) and circular muscle layer (CM) of the stomach of normal, wild-type (WT) mice and klotho mice, a genetic model of aging. Scale bar, 50 µm. B, Slow waves recorded in the circular muscle layer of the stomach; note reduced amplitudes in klotho mice. Panels are reproduced, with permission, from ref.21 (© 2010 The Authors. Journal compilation © 2010 The Physiological Society).