During the past dozen years gastrointestinal stromal tumors have emerged from oncologic obscurity and reached center-stage in the development of targeted therapies for solid tumors. Tyrosine kinase inhibitors (TKIs) like imatinib, sunitinib, and more recently regorafenib, have proven effective in suppressing the growth of metastatic GIST, allowing patients to live far longer than during the previous era of ineffective chemotherapy. Parallel stories in the treatment of malignant melanoma and non-small cell lung cancer are being played out, with one theme common to all of them: match the right drug to the right mutation, and the tumor will respond well to the treatment. In this article, I will discuss some of the technologies, both standard and new, that are used to identify mutations in tumor DNA.

The two main treatment targets in GISTs are mutations in the KIT and PDGFRA genes, which code for closely related tyrosine kinases, enzymes that are critical to the growth of GIST cells. Shutting down these hyperactive enzymes with TKIs like imatinib causes the cells to stop growing. Some of the arrested cells will go on to die, resulting in tumor shrinkage and improvement to the patient’s well being. Based on data from several clinical trials, it is well established that ability of imatinib to block kinase activity is dependent on the type of mutation present in the KIT or PDGFRA gene. For example, tumors with a KIT exon 11 mutation are highly sensitive to 400 mg of imatinib, while those with an exon 9 mutation are better controlled by a higher dose (800 mg). On the other hand, tumors with the PDGFRA mutation D842V are completely resistant to imatinib. For these reasons, it is important to genotype GISTs (determine their mutation status), and this has become standard practice in many laboratories around the world. 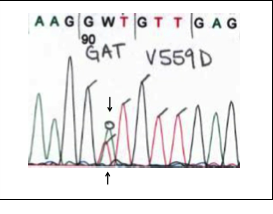 Sanger sequence showing a green (A) peak overlying a red (T) peak in KIT exon 11, indicating a mutation that changes codon 559 from a valine (V) to aspartic acid (D). This is a common mutation that is sensitive to imatinib.

Genes are somewhat like books, each one divided into a series of exons (chapters) that are made up of codons (words), which in turn are made up of bases (letters). In GISTs, mutations vary from a single base change (substitution of one letter by another) to deletions of up to a dozen or more codons (words) in a row. The KIT exon 9 mutation is caused by a duplication of two codons back-to-back, as though someone forgot to proofread the gene when it was copied during the growth of the cell.

Finding these mutations within the 3.2 billion letters (bases) that comprise human DNA requires the use of PCR (polymerase chain reaction). This approach revolutionized molecular biology in the early 1980s and is now the mainstay in all laboratory testing for tumor mutations. The details of PCR are beyond the scope of this article, but one can think of it as a means of Xeroxing selected chapters (exons) in any book (gene) in the library of the human genome. Xerox copying of the KIT and PDGFRA genes by PCR is the first step in looking for mutations in DNA purified from a GIST. Generating sufficient copies of these genes is necessary so that additional technologies can be used to read their bases (letters) and determine whether a mutation is present.

The standard method for reading DNA sequence is called “Sanger sequencing,” named in honor of Dr. Frederick Sanger who first invented the method in 1975 and later received a Nobel prize for this breakthrough. Widespread adoption of Sanger sequencing led to the identification of mutations in many different kinds of cancer, including the 1998 discovery of KIT mutations in GIST. Sanger sequencing was also used in the initial sequencing of the entire human genome, which was a massive undertaking that was completed in the year 2000.

An example of Sanger sequencing is illustrated in Figure 1. Each of the four letters that make up DNA (A,C,G and T) is represented by a different color: green for A, blue for C, black for G, and red for T. When there is overlap of two different colors, this indicates the presence of a mutation (see arrows in the figure).

Sanger sequencing is used by laboratories worldwide for the routine genotyping of GISTs. It is reliable and can identify a mutation reasonably quickly (24 hours) once DNA from a GIST has been purified and amplified (Xeroxed) by PCR. However, Sanger sequencing does have one major drawback: one can only sequence one exon (chapter) of a gene at a time, and most sequencing machines can only handle between 16 and 64 samples at once. In order to screen a GIST for all common KIT and PDGFRA mutations, one must perform 7 different sequencing reactions, which is quite labor intensive.

Fortunately, the next generation of DNA sequencers is radically changing the landscape. There are a couple of different chemical approaches used in these ‘next-gen’ systems, but what they share in common is a miniaturization of the sequencing reaction, such that instead of being limited to between 16 and 64 sequences these systems can sequence millions of fragments of DNA simultaneously. As a result, DNA is being sequenced faster and more completely than ever before, and the price of sequencing is dropping like a stone. The human genome project, performed using traditional Sanger sequencing, cost $2.7 billion to establish the first human sequence. Thirteen years later, this amount of sequencing can be done for $5,000. 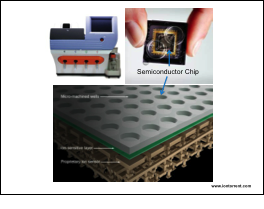 Figure 2.
A next-gen sequencer now being used by some clinical laboratories for tumor genotyping. Several million parallel sequencing reactions are conducted on the surface of the semiconductor chip.

Next-gen DNA sequencing is being widely applied in cancer research, including the studies being carried out by members of the Life Raft Group GIST research team. To date, more than three dozen samples of different types of GIST have been sequenced to identify alterations other than the familiar KIT and PDGFRA mutations that might play a role in the malignancy of these tumors. Interestingly, low-risk GISTs have relatively few mutations outside of KIT, while malignant GISTs have dozens of mutations across a wide diversity of genes. Unraveling this genetic complexity is one of the primary challenges facing us today, but it holds forth the eventual promise of uncovering new approaches to GIST treatment.

Until very recently, next-gen sequencing was used exclusively for research, but smaller, less expensive instruments are becoming available for use in clinical laboratories. At the Knight Diagnostic Laboratories, part of Oregon Health & Science University, we took delivery of a next-gen sequencer in March of 2011 and spent the next year developing and validating methods to sequence DNA from clinical tumor samples. The system that we chose is the PGM (personal genome machine) from a company called Ion Torrrent (www.iontorrent.com). What is remarkable about this platform is that the DNA sequencing is performed on the surface of semiconductor chips that resemble those inside a computer (Figure 2). This allows the chemical signals generated as DNA is copied to be turned directly into electrical signals that the computer can interpret. Thus, the output from the PGM is digital (actual letters), as opposed to the analog signal of Sanger sequencing (colored peaks that must be interpreted). The difference is rather like that between modern digital cameras that produce image files, as opposed to old-fashioned cameras that used film. We can generate a lot more information, and more quickly, using the digital approach.

Using next-gen sequencing, we can simultaneously sequence a whole panel of genes relevant to GISTs, as compared with looking at just seven exons of KIT and PDGFRA. The results are turned around in nearly the same time frame, and the difference in costs is nominal. Our new GIST panel is used primarily to assess ‘wild-type’ GISTs, which lack a KIT or PDGFRA mutation. The panel covers 21 other genes known to be important in GISTs, including the SDH genes that were recently found to be mutated in a subset of wild-type GISTs. It is our hope that by using this panel we will help to identify tumors with some of the more rare, but potentially targetable, mutations, including those occurring in genes like BRAF, HRAS, NRAS and NF1.

What’s next? The revolution in DNA sequencing is not over. Indeed, within a year the cost for sequencing all of the genes in a GIST (not just a select panel) will drop to under $1,000, and there are ‘nanopore’ technologies on the horizon that will make sequencing even faster and cheaper still. Building computer centers and training personnel to handle all of this information is the next challenge, but the day is not far off when all tumors will be subjected to a complete genetic analysis before any treatment decisions are made.