Skip to content
Home/Is it time to cure GIST?

Is it time to cure GIST?

I’ve been working on a cure for GIST most of my professional life and the initial work was both exciting and fulfilling. I remember when we confirmed the presence of KIT mutations in most GISTs in 1999. It seemed too good to believe. Then, there was the finding that STI-571 (now known as Gleevec) could target KIT in addition to BCR-ABL. We thought it might inhibit GISTs but we had no idea it would work so well. The first clinical trials were so exciting — dramatic stabilization of horrible metastatic disease in the majority of GIST patients. Then we saw the first depressing signs of resistance. Patients were progressing and many of them would go on to lose the battle against Gleevec resistant GIST, even after second line Sutent, third line Sorafenib, etc. We’ve learned a lot over the last 15 years but we still haven’t learned how to cure GIST.

What is imminently clear to everyone in the field is that no single agent is going to cure or even control GIST indefinitely. It’s just too easy to develop resistance to a single agent. That is where combinations of therapeutic compounds emerge as a strategy to treat GIST. However, more needs to be done in the way of modeling different drug combinations to understand how combination therapies affect GIST cells. In an effort to better understand how different therapies interact to inhibit various GIST cell models, our laboratory has been studying these combinations in dishes of GIST cells in the lab. What we’ve found is interesting and we believe this work has the potential to cure GIST patients. 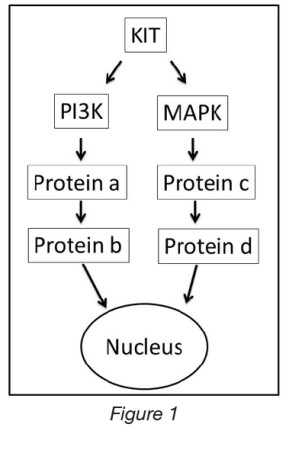 To understand what I’m talking about, let’s review basic signal transduction networks in GIST cells (see Figure 1). Think of signal transduction networks like electrical circuits. Basically, KIT is like a switch. Remember, KIT is the protein that is mutated in the majority of GISTs and since it is mutated, it is always turned “on”. In normal cells, KIT is usually turned “off” and turned “on” only in special circumstances. Once KIT is “on”, it needs to send a message to the nucleus of a GIST cell telling it to “divide”. Cell division is how tumors grow. KIT can’t communicate with the nucleus itself so it communicates with the nucleus through other proteins, which in turn talk to other proteins and eventually the message gets passed to the nucleus. You can also think of signal transduction as a weird protein-protein relay where the goal is to get the cell division message into the nucleus. These proteins form pathways / networks that we call signal transduction networks. Since KIT talks to multiple pathways, there are multiple ways to get the message into the nucleus. Combination therapy is used to inhibit KIT but to also inhibit the other protein members within the downstream pathways that talk to the nucleus. There are two major pathways downstream of KIT and also some minor pathways that we know less about. The two major pathways are the phosphatidyl-inositol 3 kinase (PI3K) and mitogen activated protein kinase (MAPK) pathways.

The GIST world is not alone in its realization that combination therapies are the way to go. For instance, a major oncogenic protein in melanoma is a protein known as BRAF, which is a component of the MAPK pathway. While targeting BRAF alone stabilizes tumors for only a short time, the combination of a BRAF inhibitor and a MEK inhibitor (another protein in the MAPK pathway) is more successful. Furthermore, recent collaborative work between a giant in the field of oncology, Dr. Bert Vogelstein of Johns Hopkins University, and evolutionary mathematicians, applied mathematical models to try and understand how melanoma cells that are ‘addicted’ to BRAF evolve after treatment with Vemurafenib, which targets BRAF1. They found that dual therapy (two drugs) results in long-term disease control for most patients, if there are no single mutations that cause cross-resistance to both drugs; in patients with large disease burden, triple therapy (three drugs are needed).

Because we know the major downstream pathways, we decided to work on combinations of KIT inhibitors, PI3K inhibitors and MAPK inhibitors. Other GIST researchers have of course also realized this, which is why several new clinical trials combining Gleevec with either PI3K inhibitors or with MAPK/MEK inhibitors have been initiated.

Let’s look at some results in order to get a feel for how this works (Figure 2). What you are looking at in panel 2a-e, is dishes of GIST cells that are growing in various drug combination. This GIST cell line in these dishes is known as GIST-T1-T670I. It contains a conventional KIT mutation that is controlled by Gleevec but like many GIST tumors that have been exposed to Gleevec for a while, it also contains a T670I mutation that is not controlled by Gleevec. The experiment is to treat the GIST cells for one month and then remove drugs and see what grows. In dish “a” you can see lots of black spots, indicating that the tumors cells were unaffected by Gleevec. In dish “b” there are less black spots and they are smaller because we added two drugs in this dish, Gleevec and a PI3K inhibitor. In dish “c”, Gleevec is added to a MAPK inhibitor and while there are fewer cells than in the Gleevec alone dish, the Gleevec-MAPK combination is not as good as the Gleevec-PI3K combination. That is because KIT signals largely through the PI3K pathway and to treat GIST, we must control PI3K signaling either directly through a PI3K inhibitor or indirectly through controlling KIT as is seen in dish “b”. In dish “d”, there are very few and very small colonies, indicating that the combination of a PI3K inhibitor plus a MAPK inhibitor is really good at controlling these Gleevec-resistant GIST cells. However, the combination of Gleevec plus MAPK inhibitor plus PI3K inhibitor (dish “e”) is even better.

We’re excited about this approach because it suggests that we may be able to give therapy for a limited amount of time (e.g. one month) and that triple therapy may even cure many GIST patients. However, the down side of triple therapy is that it is highly toxic – much worse than Gleevec alone. We’re not sure if patients can tolerate these three inhibitors in combination. However, since the efficacy is so great and it treats all the mechanisms of Gleevec resistance that we’ve been able to model, we think this approach merits serious consideration.