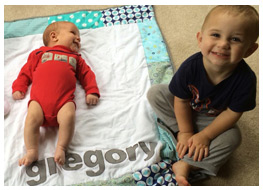 On September 6th, Jason De Lorenzo continued his annual tradition of throwing a barbecue for family and friends. Jay’s “DeLo Barbecue” combines all the great elements: good food, great conversations, music, laughter, and a chance to contribute to the Life Raft Group. Over 40 people attended this year.

“It’s a way to give back to the Life Raft Group. As a GISTer myself, a barbecue provides a good way to broach the subject and to raise awareness about GIST. I provide all the food, and encourage everyone to make a donation,” De Lorenzo shared.

Originally diagnosed with Carney’s Dyad (Pediatric GIST) in 2003, Jason had surgery, and then went forward living his life. He was unaware of the LRG, and did not seek any support at that time.

When he had a recurrence in 2007, he was introduced to the Life Raft Group at the NIH clinic, and liked the work we do.

“Since I have Carney’s Dyad, there is a 50 percent chance my children could have the disease. This makes it personal, and drives me to encourage others to have testing. For my children’s sake, I want to help find a cure.” Jay and his wife Jill have a new addition. Only six weeks old, baby Gregory John joins two-year old brother Simon Joseph.

“When people look at me, they don’t see a cancer survivor. They just see a regular guy. I want to help spread the word about GIST.”

And Jay is doing just that: one barbecue at a time.