This was a year of challenges and triumphs for the Life Raft Group as we continued our mission to find a cure for GIST, and to provide research, education, support and advocacy to help our members survive until we do. On a more personal note it was another year that our community of heroes and heroines faced death with the quiet courage and grace that defy description. Like the mom who managed to replace the absolute terror on her face with a smile to reassure her young daughter being moved into a CT Scan machine that everything would be alright. Or the wife hiding her pain as she got out of bed to go to the bathroom and the husband who pretended not to be awake and notice. 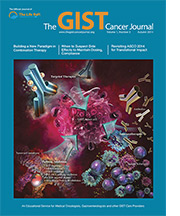 This year we managed to commit new funding for our world class research team just in time to enable them to continue their search for a cure. This is particularly noteworthy given the decreases in funding that have left many researchers in dire straits.

Our Patient Registry was converted to a SQL-based platform to provide a foundation for web-based access to patients and researchers in the near future. Backed by our tissue bank housed at Stanford University, our Registry continued to serve as a vital source of research information and to provide empirical information helping guide patients and their physicians through survival decision-making in the absence of more formal clinical trial data.

We continued our support of the NIH in-person clinic for patients with Pediatric and Wildtype GIST. Due to a reduction in federal funding, the NIH had to cut the number of in-person clinics held per year. In response, we collaboratively launched our first Virtual GIST Tumor Boards, allowing medical professionals to present cases to GIST experts remotely using cutting edge technology. Our second Virtual Tumor Board had global reach, with patients from the United States, Latin America and Eastern Europe. In 2015, we will be expanding to adult GIST cases.

The GIST scientific community was enriched by the launch of The GIST Cancer Journal, the official journal of the Life Raft Group, and the first academic journal devoted solely to GIST. Dr. Jonathan Trent was named Editor-in-Chief. This will not only facilitate the sharing of GIST research, but will bring about more knowledge and awareness to those on the front lines such as oncologists, gastroenterologists, radiologists, nurses and surgeons. 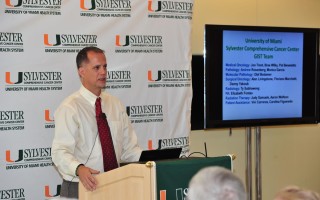 Our patient education reach continued to grow in 2014, with GIST Days of Learning (GDOLs) held around the U.S. We continued to provide education through our webcasts, including the popular GIST 101 held by Dr. David Josephy, as well as our Virtual Roundtable series hosted by Science Director, Jerry Call.

Meetings around the world were hosted and attended by the LRG staff and members, including New Horizons in Switzerland, CTOS in Berlin, and the ICCC in Peru. New Horizons brought together 44 GIST patient representatives from 28 countries and 32 patient organizations. Alianza GIST members from throughout Latin America also joined the Life Raft Group in Switzerland.

Our members and their supporters are the heart of the LRG. We held our first Appreciation Dinner, inviting the local GIST community to join us just to say “Thanks” to all those who in big and small ways make someone else’s life a little easier or happier.

Poker played a big hand in our fundraising efforts this year, with the Poker for Hope event in Caesar’s Palace, Las Vegas and the Night to Fight Cancer tournament in New York. Both were events that brought together the community for elegant evenings of fun that raised over $100,000 for our life-saving efforts.

Support for our community both locally and worldwide was enhanced by our first GIST Awareness Day (GAD).  As an offshoot of our successful Rare13 campaign, the goal was to raise awareness about GIST, bringing together people in a collaborative effort to educate and inform the public. As a symbol of GAD and of hope, we raised the challenge of folding 20,000 origami paper boats. Little did we know that this would become a worldwide effort, with over 130,000 boats from as far away as Mumbai folded and delivered to the LRG in time to be displayed in a photo booth at Life Fest 2014.

The year culminated in our biennial Life Fest celebration, held in November in Teaneck, New Jersey. Countless dedicated hours were spent preparing for this successful event that brought together researchers, members, caregivers, holistic practitioners, pharmaceutical representatives, staff and honored guests. We came together once again to support and learn from one another, to celebrate the lives of those whom we have lost and to increase the critical knowledge of those struggling to survive.

Science Director Jerry Call and Executive Director Norman Scherzer ended the weekend by introducing the Survival Plan, an ongoing series to be continued in 2015 that will outline strategies to double survival for those diagnosed with GIST. 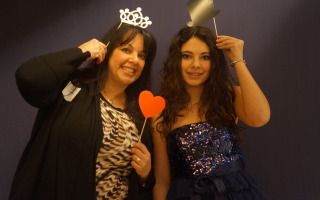 LRG staff members joined together with One Voice Against Cancer in Washington, DC in July to lobby for a $5.2 billion cancer research funding package to benefit some of the top GIST research facilities in the world, including the NIH and NCI.

We also held an informative webcast on “Affecting Change from the Top” that provided members with a format for advocating for change.

Our members are our most fervent advocates, with GIST Awareness Day reaching hundreds of people through three main events in LA, Miami and Chicago, and also through booths at state fairs, book signings, local GDOLs and by placing articles in local newspapers.

On the wings of heroes

As the year drew to a close, we experienced some heavy losses. Board member Dave Safford lost his courageous battle with GIST but showed us all what true heart looked like.

Shortly after, Michael Byrne, spouse of Board Member Mia Byrne, passed away having fought GIST for over a decade. He had planned to run the Chicago Marathon with a family friend Jennifer Hartzler. With no time at all to prepare, Mia decided to run two miles as a token gesture to honor Michael’s memory. With strength that nobody could understand, that defied all logic, Mia kept on running and somehow managed to finish the 26.2 mile course. We choose to believe that she ran on the wings of Michael, her hero.

Hope for the future

A few days ago a young GIST patient posted to Facebook asking information about how to buy a cello. The mother of a young child with challenging funds, she noted in passing that she no longer had the breath to play the flute because of a tumor in her lung, but she wanted to continue to play music. However, the hundreds of dollars that a cello cost seemed quite out of reach.

As we go to press, we are happy to note that a giant-sized package just arrived at her door. Sometimes even small victories are so sweet.

And speaking of small victories, our own Sara Rothschild was blessed with the birth of Tehila Malka, her daughter who was born a few weeks before our Life Fest gathering. Seeing Tehila at Life Fest with her brought us all hope for the future.