Skip to content
Home/Chris Carley: Goodbye to a Hero

Chris Carley: Goodbye to a Hero 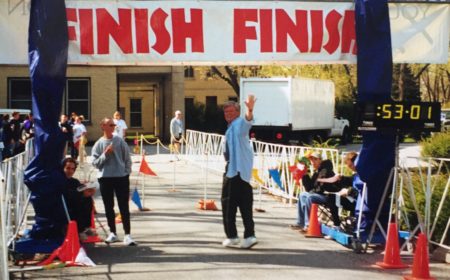 A few weeks ago, Chris Carley lost his battle with GIST and the Life Raft Group lost one of its heroes. He was 73 and had been fighting his battle with GIST since 1995. He is survived by his beloved and devoted wife, Nancy; two sons; two daughters; eight grandchildren and hundreds of friends. I was blessed to be one of those friends — and like all his other friends, I can tell you two things for sure about Chris: He loved life and he loved to tell a good story.

For many years, Chris was a prominent developer in Chicago, where he built thousands of condominium and apartment units. Perhaps he is best known for his efforts to build the tallest building in the western hemisphere, the Fordham Spire, aka the Chicago Spire, aka the Calatrava Spire. It was a grand vision, which was very typical of Chris. If you are curious about the project, you can easily find many articles about it at bit.ly/SpireChicago

According to Chris, his financing for the project fell through when he went head to head with Donald Trump and some rumored nefarious dealings by Trump, who was building a competing building in Chicago at that time, had a very chilling effect on Chris’s ability to raise money.

Santiago Calatrava, arguably one of the greatest architects of our time, designed the building. After the project failed, Calatrava said something very insightful about Chris: “He’s not just a rational developer. He’s driven by his heart.”

And so he was. Chris led with his heart in all things, and his passion for life and for helping people was an irresistible force.

He became a hero to GISTers in 2000, when he thought he was near the end of the road in his fight. In March of that year, he and Nancy went to see Dr. George Demetri at Dana Farber. He tried a couple of unsuccessful clinical trials — but by June, his fight was close to over. However, Dr. Demetri gave him this news: “There is a drug that we think would be very effective, but we just can’t get any of it.” Chris wanted to know more and Dr. Demetri shared the details.

Chris responded with typical passion, “Well, that won’t do. I’m calling my big brother who works at the Wall Street Journal. He’ll do something!”

In fact, Chris’s brother, William Carley, was a senior reporter at the paper. I talked to Bill and he recounted the story, “Chris called me and told me that Novartis had a drug that would save his life but that no one could get any of the drug for GIST.”

Bill said that he called Dr. Demetri to confirm Chris’s story, who shared with him that the drug, STI-571, had been very successful in treating Chronic Myeloid Leukemia, but was still in clinical trials and hadn’t been approved by the FDA. Apparently, Novartis simply didn’t have sufficient supplies to support a clinical trial for GIST. Dr. Demetri also shared that he had been successful in getting the drug for one patient from Finland (the famed “Patient Number One”) and the results had been spectacular.

It just so happened that Novartis, the drugmaker of STI-571, was in the middle of a public offering of its shares in the United States. So, about a week or so after his calls with Chris and Dr. Demetri, Bill showed up at a presentation that Novartis was making to a gaggle of financial analysts.

After the presentation, Bill made his way to the head of research and introduced himself as a reporter from the Wall Street Journal. Bill asked about progress in the trials and shared that his brother had GIST and was at the end of the road. He asked about the likelihood of a trial for GIST in the near future. “We’re looking at it,” the researcher replied.

Less than a week later, George Demetri got a call from Novartis. “We have a limited amount of drug available to start a Phase II trial for GIST.”

Bill refuses to take any credit for the drug’s sudden availability.

All of that is why, in June of 2000, Chris Carley became Patient Number Two and arguably accelerated the delivery of STI-571 to all the other patients in the Phase II trial, myself included. Most of us who participated in the Phase II trial were at death’s door, with only weeks or months left to live. So, getting STI-571 a few weeks or months earlier than it might have otherwise been available saved many lives.

Chris tells the story a little more dramatically. His version is on the LIVESTRONG Foundation website. He also shares the story of his ongoing battle with cancer-related depression. It’s worth a read and a listen (there’s a video of Chris).

STI-571/Gleevec bought Chris and Nancy almost 16 years of high-quality survival. During those years, he didn’t sit around. He built two more downtown condominium projects; took a swing at building the Spire; and worked tirelessly for many non-profits, including the LIVESTRONG Foundation, Gilda’s Club, the YMCA and, of course, the Life Raft Group. And he told good stories — lots and lots of good stories.

For all his life, Chris was a handful. It took a special woman to keep him on course. I’ve always said that cancer is harder on the caregivers than it is on the patient. Nancy fought tenaciously for Chris every step of the way. Toward the end, I spent many hours listening to her work through what options might be available, where she could help Chris find another miracle that might buy more years. She was, and is, amazing.

My last conversation with Chris was a few days before he passed. He was weak and had trouble talking — but was haranguing me to get off my sorry behind and help him find another clinical trial. When he was done with that, he solicited my support to start a new non-profit to help people navigate their way to the right doctors, the best care, and through the maze of tedious insurance-claim filing. The man didn’t have any quit in him at all.

God bless you my friend, Chris Carley. I’m quite sure that Heaven can always use a good story.