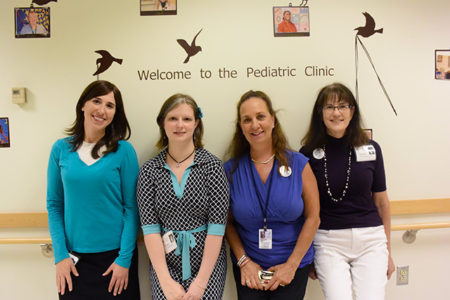 The 14th Pediatric and Wildtype GIST Clinic was held at the National Institute of Health (NIH) in Bethesda, Maryland on June 15-17, 2016. What follows is a summary of the discussion held during the question and answer session chaired by Dr. Lee Helman and Dr. Fernanda Arnaldez on the last Clinic day.

Gratitude was expressed to every one of the patients, their families and all interested parties for their participation in the Clinic, as this allows the researchers and clinicians to learn in order to develop future therapeutic interventions.

Genetics is a rapidly evolving area in Wildtype GIST. The following description of epigenetic vs. genetic changes in regards to SDH GIST was offered:

If you have a mutation of any of the SDH subunits (a,b,c, or d), the next important question to ask is whether or not it is a germline mutation. (So far, data has indicated that 80% of SDH-deficient tumors are germline). The term “germline” means that the mutation is present in every cell of your body. Germline mutations are hereditary, and can be passed on to your children. For this reason, genetic testing and counseling could be informative for parents, siblings and other family members. If a family member tests positive for the mutation, this does not mean that they will get GIST. There are plenty of examples of people in a family who have an SDH mutation but who do not develop tumors.

If your GIST is not germline, and it is just in the tumor, then you are not at risk of passing that gene on to the next generation and other members of your family.

All patients with SDH mutations (subunits a,b,c or d) are SDH deficient. SDH-deficient is the broader term that covers SDHA, SDHB, SDHC, SDHS and SDH-epimutations, all of which lead to SDH-deficiency. There are subtitles in whether you are epimutant (in which case you do not need genetic counseling) vs. if you have an SDH gene mutation. there are also subtitles pertaining to which type of tumors you get, which is dependent on which subtype of mutation you have. There is a tendency for more GIST tumors associated with SDHA mutations, and more paragangliomas with SDHB mutations. However, they are both SDH-deficient.

The term SDH-deficient simply means that the SDH protein is absent. The presence of the protein in the tumor is tested by applying a stain (immunohistochemistry, or IHC for short).

New SDH mutations have recently been discovered.  These may be referred to as variants of unknown significance, or VUS.  In these instances, the normal sequence of the DNA is subtly different.  This difference may not have previously been reported frequently enough to be named as a known mutation.  Although it may be too early to call a VUS an identified mutation, If you have an SDH variant of unknown significance, the thing that is important is whether or not the tumor is expressing SDHB.  If the VUS has changed the ability of the tumor to express SDHB, it is probably the mechanism of the tumor.

The term Quadruple-negative Wildtype GISTS has been coined as a description of GIST tumors that are not driven by c-KIT/PDGFRa, SDH, BRAF, or NF1.  They are really outliers as far as frequency.  In the course of the Clinic, NIH has found ten patients to date who had neither a KIT nor an SDH problem.  Two of them were NF1-mutant tumors, two were BRAF-mutant tumors, and in six, they were able to identify novel mutations in 5 out of the 6 of the patients in this category.

One of the biggest impediments to SDH research is the lack of an SDH-deficient cell line that can be used to study the effect of drugs on the tumor cells. If you have a scheduled surgery for removal of an SDH-deficient tumor, please contact Dr. Helman in advance in the event a fresh tissue donation may be possible in order to assist with the effort to establish a cell line at NIH.

NF1-GIST is a completely different disease, and, frankly, there is much less known about it.  In NF1-GIST the SDH is completely normal.

A question was posed by a Clinic participant as to whether or not Pediatric GIST should or should not be classified as a cancer.  The word cancer carries with it a lot of emotional overtones.  Dr. Helman mentioned that he has been told that the three worst words you can hear are “you have cancer”.  He believes that GISTs are cancer because they can metastasize, and that is a hallmark of cancer.  However, he reminded us that there are GIST patients that that do extremely well.  But remember, it is a tumor…it can metastasize…but patients can live decades with it.  Most of the time when you think of cancer, you imagine dying soon.  All cancers are not the same.  It is a GIST…it will involve chronic management.

The National Cancer Institute is working to launch two new clinical trials, one for NF1-GIST and the other for SDH-deficient GIST.  They are hoping that these trials will be open for patient recruitment this Fall, as follows:

For NF1-GIST:  A Phase II trial using MEK-inhibitor Selumetinib (AZD6244).  Selumetinib is delivered orally.  It is also being utilized in trial for the treatment of Plexiform neurofibromas.

The NIH Pediatric and Wildtype Clinic may be reached by email at:  ncipediatricgist@mail.nih.gov   Please do not mail anything that is an emergency to this account.

They will be launching a website in the near future to post updates about the status of the Clinic as well as pertaining to the status of the above-referenced clinical trials.  The website address will be: ccr.cancer.gov/gist