For me, the revelation began in July 2000. My wife, Stephanie, had been diagnosed with metastatic GIST nine months earlier. At that time, almost everyone thought GIST was another cancer called leiomyosarcoma (LMS). At best, some thought that GIST was just a variant of LMS.

At that time, I belonged to a listserv for LMS patients ran by Gilles Frydman of the American Cancer On-line Resources (ACOR). Treatment for LMS (and GIST) was what today we call cytotoxic chemotherapy. Back then we just called it chemotherapy because almost all cancer-directed drug therapy was cytotoxic chemotherapy. Doxorubicin and Adriamycin were the two most common chemos and they were often given in a very difficult mixture called MAID (Mesna, Adriamycin, Ifosfomide and Decarbizine). Common knowledge at the time was “that abdominal LMS (GIST) did not seem to respond as well as LMS from other locations (LMS).

Look hard enough and you could find really bleak information (much of which was inaccurate); such as one blog (not sure it was called a blog back then), that claimed LMS as one of the deadliest of all cancers. 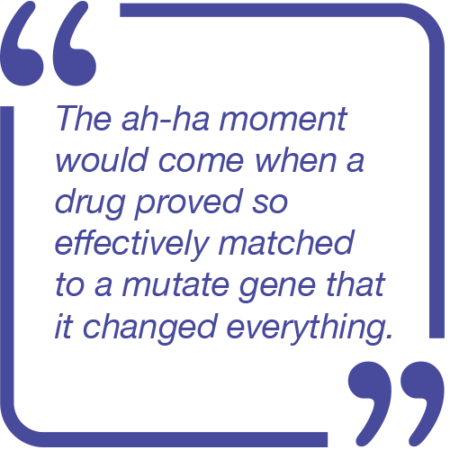 By July of 2000, Stephanie had exhausted the normal treatment route; trying two rounds of MAID with her local oncologist, followed by surgical consults at an academic hospital, a second opinion at Dana-Farber, one of the top sarcoma referral hospitals, a tissue-sensitivity test followed by more chemo and even some interferon mixed with an alternative treatment. But finally reading thousands of emails written by patients in the listserv was about to pay off big-time.

In addition to the listserv, I had started the long journey of learning about cancer. Somewhere between “thank god for the internet” and “be careful, it’s the internet,” I learned how to learn.This meant finding out about new things like PubMed, the library repository where nearly every medical paper is indexed. Here I could find abstracts and start learning. With a little bit of a jump-start from PubMed coupled with the visit to Dana-Farber, I had already figured out that GIST and LMS were different. After the Dana-Farber visit, where Stephanie was told that she probably had GIST and not LMS, I started to focus much more on GIST when doing research.

After the Dana-Farber visit, I read about little-publicized research that found c-kit mutations in a very small number of patients. However, at that time, there hadn’t really been the big connection. The ah-ha moment would come when a drug proved so effectively matched to a mutate gene that it changed everything. Well, there had been, but it was recent and obscure enough that my fledgling research skills hadn’t uncovered it. The ah-ha connection between drug and mutation came in a leukemia, chronic myelogenous leukemia (CML).

In July 2000, Norman Scherzer posted about an amazing response that his wife, Anita, had after one month on a new drug, STI-571. Anita was participating in a very limited (30 patients were intended) phase II trial of the drug at Fox Chase Cancer Center in Philadelphia. Gary Golnick, another caregiver to his wife, Mary, quickly followed with a post about the trial, including several other patients that were responding at Dana-Farber. He also had a few other details, like the name of all three trial sites in the U.S.A..

Armed with these facts, I did some quick research. I found that this new drug, STI-571, had been developed for CML and had already undergone a phase I trial in CML (thus they could move directly into phase II in GIST). In CML, it inhibited a different protein, Bcr-Abl. Bcr-Abl mutations and the resulting defective protein were basically the cause of CML. It turns out that this drug was incredibly effective in CML. In the phase I trial, something like 55 of 56 patients had responded to the drug. In the world of cancer, that wasn’t just effective, it was unheard of.

With details about the trial, I called each of the three research nurses running the GIST phase II trial (B2222) in the US. From them, I first learned about patient 0 and her response to the drug. Patient 0 was the first GIST patient to take STI-571 before the trial. I learned that it was a c-kit inhibitor and that this was probably why it was working for GIST. But there was something different in their voices. When Stephanie was at Dana-Farber, we talked about clinical trials with her doctors (but not the STI-571 trial, since it wasn’t open yet and wasn’t being talked about). The prevailing attitude about trials at that time (everywhere, not just Dana-Farber) seemed to be “we have a trial; we don’t know if it’s going to work, it might help patients in the future”. There was little talk, or at least little optimism, that trials could help patients, and that certainly didn’t come across as their intent. That attitude was completely absent in those three research nurses. To the contrary, they could hardly conceal their excitement and I’m not sure they were trying to. It was early, but the drug was working…and working very well.

After talking to the research nurses, it was time to put two and two together. I wrote a long post to the LMS listserv about abdominal LMS. Long story shortened; if you have abdominal LMS, make sure it gets stained for c-kit. If it stains positive, you probably have GIST and need to get into this trial. I filled in some of the background about GIST’s having c-kit mutations (now days we call these KIT instead of c-kit) and CML, phase I results etc.

The phase II trial that was supposed to recruit 30 patients now had a problem-many, many more applications. To their credit, they ended up opening more slots and ended with 147 patients, including Stephanie, Anita and Mary Golnick and many others. Still, the word of a miracle drug for a cancer that was notorious for not responding to treatment, spread quickly and every advanced GIST patient in the world with access to the internet and/or GIST/sarcoma specialists wanted and needed access to STI-571. Again, GIST doctors and centers rose to the challenge. Two large phase III trials were quickly organized and began recruiting patients in less than two months.

You might have guessed by now; STI-571 is now known as imatinib, or Gleevec in the US and Glivec in the rest of the world. And many patients knew about this drug long before it became a superstar at the 2001 ASCO meeting and long before it was approved for GIST in 2002. They know about it because patients reported outcomes…to themselves.

So, you tell me: can patient-reported outcomes make a difference?