Skip to content
Home/Patient of the Month for July: Robert Little

Patient of the Month for July: Robert Little

As a part of our Faces of Courage series, we are featuring a patient story each month. Each one of our members has a unique story to tell, but they all reflect the intrinsic courage of those who face the challenges of cancer head on, with dignity, strength, and passion for life.

Our Patient of the Month for July is Robert Little. Here is his story: 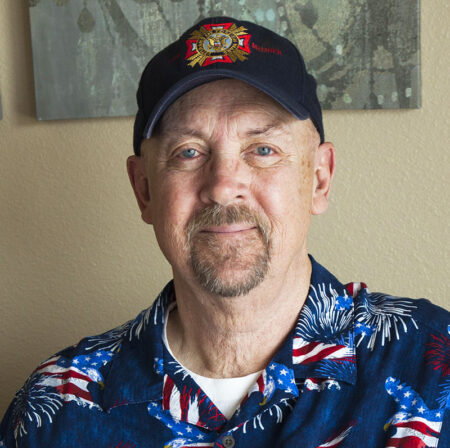 I heard the beep and whir of machines. Where am I? I am dreaming that I am drowning, just can’t get enough air. I see bright lights through my lids, I guess it is time to open them. Slowly I blink to clear my vision, and I see my left hand is restrained. Looking toward the right I see my right hand likewise restrained. Two nurses are working on an EKG monitor and are not looking towards me. With my hands tied, I try to wave. One of the nurses sees me and tells the other nurse that, “Mr. Little may need more sedation.” I shake my head as to say “NO”, just as my adult son enters the ICU room. After releasing my hands, he handed me a child’s slate, the kind that you mark and raise the film to erase. I wrote one word, “torture” and the phrase “can’t breathe.” The attending pulmonary specialists agreed, reluctantly, to remove the thoracic tube and fit me with a pressurized mask. It was heavenly to get so much oxygen through the pressure feed. I just had to inhale slightly to cause the regulator to fill my lungs. It felt perfectly normal to me (I am a PADI Certified Advanced Open Water SCUBA diver).

It wasn’t until the next day that the surgeon stopped by the ICU to chat. He said I had been very near death when the ambulance brought me to the Emergency Room. He explained that I had sepsis and that the blood infection had spread to all of my organs, which were shutting down. He had to open up my abdomen for “exploratory surgery” and found a perforated tumor on the jejunum of my small intestine. He said that we would have to wait for pathology to learn the details, but that surgically he had “done the right thing” by removing the tumor and resecting my small intestine.

It took a couple of weeks to get a pathology report. I learned that my tumor had stumped the rural hospital’s pathology staff and they had sent the tissue to the Mayo Clinic for their expertise. My surgeon interpreted the report for me, KIT-positive Exon 11, and said that “it’s not really cancer, would you like to see an oncologist?” I replied, “if it’s not really cancer, then no thanks!”

It was 2007 and I had my 62nd birthday that summer. The whole experience forced a major review of priorities for my wife and me. We decided to retire and travel, taking care of the bucket list. We sold our home and all of the contents. We purchased a used diesel pusher motorhome, and at the end of that year hit the road full time. We established our domicile in Texas, near our son and our grandchildren. I had no thoughts of GIST and it wasn’t until over three years later (mid-2010) that I was forced to focus on it. Unrelated to GIST, my Houston area family physician ordered an ultrasound test to screen for an aortic aneurysm. When he met with me, I received the classic “good news, bad news” update. “You don’t have an aneurysm, BUT we’ll have to do something about the masses on your liver.”

After a CT, MRI and needle biopsy, I learned that it was the same GIST removed from my small intestine, that had now metastasized to my liver three and a half  years later. Living in Houston, I did my online research. It was a “no brainer” to select the University of Texas MD Anderson Cancer Center at the Houston medical center.

As I in-processed and had my first meeting with my oncologist, who is a sarcoma specialist, the idea of a clinical trial was mentioned. I entered a Novartis sponsored trial that set out to determine if Nilotinib (Tasigna) was superior to Imatinib (Gleevec) as a first-line treatment for GIST. After signing the Informed Consent agreement, I was randomly assigned to the Nilotinib arm. I have taken 400 MG of Tasigna, twice a day since that point in time, 2011.

With a CT scan every 90 days, I took every opportunity to ask my oncologist if my tumors were operable. His reply was always negative. He was already talking about progression and subsequent treatment options. Finally, in 2012, after a year and a half on the Nilotinib, I insisted on getting an opinion from a surgeon. I consulted the MDACC Chief of Liver Surgery and was shocked to hear him say I was “technically a candidate for surgery to remove the three metastatic tumors.”

In a few weeks, I had a liver resection. We took our RV to a park near MDACC, which we called “Camp Anderson.” We were comfortable and happy to be on the free shuttle service. My wife and I could both travel to MDACC on the shuttle and avoid driving in the notorious Houston traffic. Follow up appointments with the surgeon and oncologist were simple, and with “medical” discounts, the arrangement was extremely inexpensive.

Here I am, writing this after 12 years of living with GIST. My CT scans are down to twice a year now, even though I must show up for the clinical trial protocol, every 90 days. My scans have been “No Evidence of Disease” (NED) since the liver surgery. I still take 800mgof Nilotinib daily and plan to continue for life. Novartis will continue to supply the trial drug, free of cost, as long as it is helping me. That has been a huge financial windfall for me.

I have no symptoms of GIST but have had small intestine blockage attributed to scar tissue. The side effects I have experienced from Nilotinib have been minor. My scalp itches sometimes and my eyes are scratchy and watery at times. That’s a small price to pay for such a life-extending miracle drug.

Study and learn your disease. Use doctors and medical research to guide your decisions, but firmly represent your own best interests.

Motto to Live By

If you have to run the heater or the air conditioning, you need to move the RV to a better place”