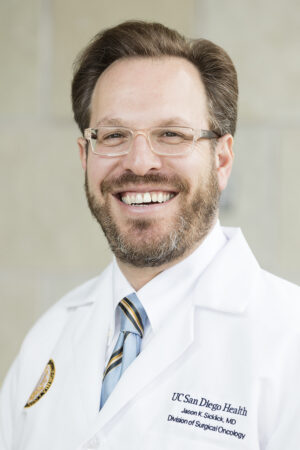 The Phase One Foundation has awarded GIST Specialist Jason Sicklick a $500,000 grant to study GIST in a Phase II clinical trial. Dr. Sicklick who is an associate professor of surgery at the University of California San Diego School of Medicine and a surgical oncologist with Moores Cancer Center at UCSD Health leads team of researches investigating how patients with SDH-deficient GIST respond to Temozolomide.

“Clinical trials have the potential for immediate impact on patients and their families facing this rare, but deadly form of an inheritable cancer. Based on research in our laboratory, we believe that this drug may be an effective treatment for gastrointestinal tumors with mutant SDH. Our investigator-led clinical trial will be opened to enrollment in several additional sites across the United States and would not be possible without support from PHASE ONE Foundation,” said Sicklick in the press release by Phase One.

Sicklick specializes in treating cancers, including gastrointestinal stromal tumors (GIST) and other abdominal and retroperitoneal sarcomas. His translational and clinical research interests include molecular mechanisms of GIST tumorigenesis and drug resistance, as well as personalized-precision medicine approaches to cancer therapy. In 2016, Sicklick was honored with the GIST Clinician of the Year award by The Life Raft Group, an international GIST research, patient support, education and advocacy organization. In 2018 he also received the RARE Champion of Hope in Medical Care & Treatment Award from the Global Genes-Allies in Rare Disease.

Phase One is a nonprofit dedicated to supporting ground-breaking Phase I and Phase II clinical cancer research, innovative education and treatment programs, and funding forward-thinking leaders in the scientific and medical community.

Dr. Sicklick presented a webcast for the LRG detailing the Phase II study of Temozolomide (TMZ) in advanced SDH-mutant/deficient GIST, a new study available to patients with SDH-deficient GIST.