Understanding the role of mutations and biomarker testing is one of most important things patients must learn. Uncovering the driving force behind each individual’s tumors is not just important, it is critical. Biomarker testing is an opportunity to improve and optimize treatment – possibly avoiding unnecessary treatments and getting to the right treatment sooner. Currently, biomarker testing rates in the gastrointestinal stromal tumor patient population are relatively poor – only about 41% of patients have had testing done. The Life Raft Group Patient Registry, which is a group of extremely proactive patients, notes only about 58% of patients are aware of their mutation.

In this article, we discuss the importance of mutational testing/biomarker testing for precision oncology. 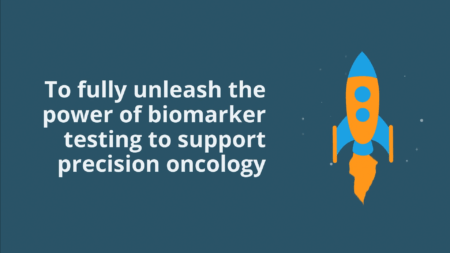 Precision oncology for a specific disease

If you have paid attention to the cancer medication landscape for the last few years, you will have begun to understand the parallel with shoes. A shoe salesman (or manufacturer) needs to take into account the individual nuances of a customer’s feet as well as their style preferences and the specific purpose the customer has in mind. To borrow a phrase from oncology, think of this not just as fitting a foot, but as engaging in “precision footwear.” Oncologists (and drug manufacturers) do something similar. They take into account the patient’s disease, tumor mutation result, and numerous other factors when prescribing or developing medications for cancer. This is referred to as “precision oncology.”

Imagine being told that these individual factors didn’t matter, but instead that no matter what type of cancer you have, you will get the same drug as everyone else. Equally ridiculous would be walking into a shoe store and finding only one type of shoe, in one size and width. For many people, that would be a solution that just doesn’t stand on its own two feet.

Precision oncology is definitely a welcome improvement, and the targeted therapies that have resulted will continue to prove beneficial to patients. GIST as a disease is a prominent example of this approach, but not the only one. Drugs have already been developed for numerous cancers that are mutation-specific, and in some cases, the benefit from these drugs has extended to multiple disease types that share the same mutation. A recent example is Keytruda (pembrolizumab), an immunotherapy drug that was developed for Non-Small Cell Lung Cancer and targets PD-1. This drug is now being used in other forms of cancer that harbor the PD-1 biomarker, such as Cholangiocarcinoma, Melanoma, and Hodgkin’s Lymphoma, and is also being studied in combination with other drugs for GIST.

This approach works because oncologists have recognized the simple truth that patients may have different cancers, but in some cases, their disease is similar enough mutation-wise that they can benefit from the same drug. But, while in many ways these patients are similar, they are also quite different, both across diseases and within their own disease. This impacts not only medication selection, but also side effect management. Let me give you a few examples of how this works.

Imagine now that you are an oncologist and you are about to see two GIST patients back-to-back. Think about what you would prescribe for each patient. Here is the scenario for each one:

This oncology thing is pretty easy, right? Or is it?

According to standard protocol, prescribe each patient Gleevec and remember to collect their co-pay. Has some information has been left out?  Let me fill in some details.

Ah ha! You can now see that the first patient would most likely benefit from Gleevec, and for the second, Gleevec is probably not the best option.

As you are beginning to see, this oncology thing isn’t nearly as easy as it appears at first glance. But, as you can also see, the key to understanding the problem lies in gathering as much meaningful data as possible. Having this data may reveal factors that make the individual case much more specific than the “textbook” one.

So, you have a patient that understands the story above, and you combine that with a physician who also appreciates that this can lead to a more favorable outcome, so you’re set, right? Well, maybe, but not necessarily. There’s one more critical piece of the puzzle – perhaps the most critical piece in fact; having access to the proper tools for the job.  Imagine walking into the same shoe store above and not knowing your shoe size, but instead of being told shoe size doesn’t matter, the salesman looks at your feet from afar and says, “well, you look like a size 9.”  Would you take their word for it, or instead would you insist on having your shoe size measured? When it comes to shoes, there is something called a Brannock device, which is the gold standard for shoe size measurement, because it is the best tool for that job. When it comes to precision medicine, biomarker (mutational) testing is that tool. If you are going to prescribe a medication based on a specific target, you need to know what the target is. Biomarker testing is the tool that will reveal that crucial information – that literally identifies the target in targeted therapy – and without it, you and your physician are just shooting blind.

If you would like to talk to someone about mutational testing, please contact our Director of the Life Raft Group Patient Registry, Denisse Montoya at dmontoya@liferaftgroup.org