Festival Season is always a fun time in Scotland, and many folks make annual pilgrimages to some of their favorite distilleries including our own Water of Life Host, me. However, in times of pandemics these festivals were cancelled and many fans were unable to take flights and drives and ferries to see their friends. However, the whiskies were bottled, so something needed to happen.

This spring the Water of Life Charity Event in New York was also canceled, but the Lifers were calling for an event where they could again “Drink Whisky to Fight Cancer.” 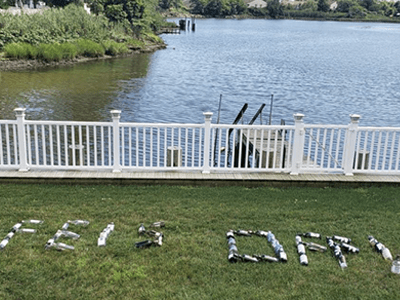 nter “Feis Off!” Instead of holding live events in Campbeltown, Islay, Jura and New York it was decided to go virtual. The brands were excited by this idea as it gave them a chance to present to several familiar as well as several new faces, and it also gave them an opportunity to share their exclusive festival bottles. Every single distillery festival release from both the Campbeltown Malts Festival and Feis Ile were present and enjoyed by every guest.

Each brand donated multiple bottles to the event, and also made sure to send us some of their best representatives to chat for the 80 guests in attendance. Rather than have one person interview them all, several of the world’s whisky best known authors, critics and presenters guided the discussion. It was a real “Who’s who” of whisky. Over three days, including an exclusive VIP event, we went through 37 whiskies, and 2,430 samples! At the same time we raised over $10k  that will go towards The Life Raft Group’s mission to enhance the survival and quality of life for people living with GIST.

Whether the whisky was a ‘no age statement’, an 8-year old, or up to a 34-year old there were so many favorites it would be hard to pick one. Just like the festivals in Scotland themselves, every day was the best day, and every dram was the best too, whether in the glass or fondly recalled.

Thank you to the brands for their generation donations of both time and spirits, and thanks to our stellar interview team for keeping the chat flowing as well as the whiskies themselves. And thank you to everyone who bought a ticket, as your donations will go a long way in the fight against GIST.

And don’t fret. Although we all hope that the distilleries will open their doors to guests in 2022, just like our other “Once in a Lifetime” event the WOLF, the calls have begun to make Feis Off! an annual occurrence. And who knows who else may show up next year? The name of the event will likely change, (Feis Long Isle anyone?) but we hope you can be a part of our future events.