Patient of the Month for January: Paul Nadolny

As a part of our Faces of Courage series, we are featuring patient & caregiver stories Each one of our members has a unique story to tell, but they all reflect the intrinsic courage of those who face the challenges of cancer head on, with dignity, strength, and passion for life.

Our Patient of the Month for January is Paul Nadolny. Here is his story: 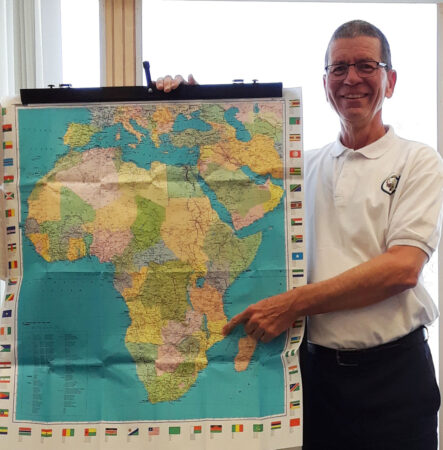 My GISTory began November 3, 2017, when a large tumor in my abdomen was identified in a CT scan. A biopsy was performed and when I met the oncologist two weeks later, I heard the news: “It is malignant”. That set me back. I had hoped to have the tumor removed with surgery and be on my way with preventative medication. When I met the surgeon about a week later, he said to me, “When I was a young doctor you would have had about six months to live.” That also set me back. So, surgery was out and I began taking the Gleevec. Almost immediately I began to feel relieved of one of the symptoms that had been weighing on my body for about five years – fatigue.

I am a Divine Word Catholic missionary priest and had been working in Mozambique since 1999. I had made my home with the Macua people in the north of the country for twelve years, living with their culture, language, food, and even the frequent malaria. Then our mission asked me to come to the capital city, Maputo, and work in our administration. It was my turn to stand in long lines at the immigration office, airline ticket counter and the bank; to attend meetings, write reports and maintain correspondence.

By the year 2012 my body began to give me warning signs that something was out of place. Along with my “homemade” yoga exercise routine, I began jogging once a week along the waterfront which helped immensely. But I had serious bouts of fatigue where sometimes I would just lay on the floor with a strange pain in the “bones” of my legs. During my home leave in 2013, my primary physician examined me thoroughly but found nothing out of the ordinary. Even the bone and joint doctor could not explain the pain that I had in my shoulder. So, I headed back to our mission confident that I would get better.

Our physician in Mozambique welcomed my frequent visits to check on malaria and the fatigue. He would always give me a good checkup and send me off with a bag full of healthy vitamins. But the fatigue with soreness in the bones of my legs continued. During my 2016 home leave I had another thorough physical exam and even an MRI on my shoulder. Even though the problem of my fatigue was not solved, nor the pain in my shoulder, I returned to Mozambique determined to keep going.

But in 2017, when I would lie down to rest, I began to feel a strange lump just under my sternum. Our physician gave me an ultrasound test and saw the tumor which we thought was a lipoma. He counseled me to go back to the States and have it checked which I did a few weeks later. These are the personal experiences that lead me to suspect that the GIST was growing in me for at least five years. When the tumor growing on the back side of my stomach was diagnosed it was already 16 cm long and had metastasized in my liver. This did not happen overnight!

After the diagnosis in 2017, the Gleevec treatment went on for twenty months. When I returned from a short visit to Mozambique for a six-month CT scan, a new tumor was found. The biopsy showed a secondary mutation and we considered surgery to remove both of the tumors. But the surgery was canceled because a CT scan revealed “interval development of multiple omental metastases”. That was another setback and left me wondering where this was going. Providentially, a clinical trial for 2nd line GIST had just opened up. I was accepted and chosen to take the “ripretinib”. I was so grateful. The side effects were minimal, as had been with the Gleevec. After fifteen months the sponsors of the study took me off of the trial because of “disease progression”. This was another setback for me because everything was stable expect for one small nodule. However, I was able to continue taking the ripretinib (Qinlock) treatment for nine months through a specialized pharmacy. When the peritoneal and omental metastases continued to increase, I was moved to the Sutent treatment. I returned to my original oncologist and after three months we saw that this treatment was not working. Now I am on Stivarga.

I have been able to cope with GIST because of my faith in God. When I served in the Peace Corps in Guatemala from 1980-82, the Mayan Quiche people of the western highlands taught me about faith. We could plant thousands of tree seedlings and cover the eroding hills with terraces, but without faith they could not get through a day. They taught me that God is benevolent, cares about them and walks with them in their suffering. We are all on a journey, and the setbacks that I face are only curves in the road. Also, I belong to a religious community. We take a vow of obedience and I have come to see the hand of God guiding me through many mysterious moments in my life. Ultimately, the best place to be is where God wants me to be.

Life here in my native USA is very fast. We could all use some warnings signs, “slow down – a curve ahead”. Life here is also very tense with everybody defending their personal territory. I learned in the Peace Corps that our home is the planet. When we lower the walls and fences that divide us and learn to listen to other cultures, traditions, languages and religions our faith becomes horizontal. We will not attain biodiversity until we have human-diversity. That’s the pathway to peace.

My hobby is to get outside and walk a little every day. I need to feel the ground under my feet even though I can rarely take off my shoes. I am also energized by researching my family history. Like the roots of a tree buried in the soil, so many ancestors have made silent sacrifices to nourish and support my family today.

Do your best and God will take care of the rest.

Criteria for Caregiver of the Month

Caregivers are an important team of family and friends. They allow a patient to depend on them for support through their difficult journey as well as help with various tasks such as cooking, housekeeping, transportation and so much more. In conjunction with Life Raft Group’s Patient of the Month, we are showcasing Caregivers of the Month. We want to hear stories of the selfless supporters that stand beside our GIST warriors.