Sept, 2007 – A diverse group of researchers has found the genetic defects that cause a rare type of familial GIST called “Carney-Stratakis syndrome”.

This syndrome has some similarities to Carney’s Triad but it is a distinct entity. This discovery may one day lead to better treatments for the affected patients and may give researchers new insights into Carney’s Triad and possibly into pediatric GIST in general. Researchers from the Carney’s Triad and Carney-Stratakis Dyad Consortium have discovered that patients with Carney-Stratakis Syndrome have an inherited mutation in one of three (of the four) genes that code the succinate dehydrogenase protein complex.

Succinate dehydrogenase (also known as succinate coenzyme Q reductase) is an important enzyme complex that is bound to the inner membrane of the mitochondria. Mitochondria are “organelles” (separate cellular structure having a specialized function and enclosed in its own membrane) within the cell. Mitochondria are known as “cellular power plants” because they generate most of the cell’s supply of ATP, an important source of energy.

Succinate dehydrogenase (SDH) converts succinate into fumarate in the citric acid cycle (also known as the tricarboxylic acid cycle or the Krebs cycle). It also participates in the electron transport chain (Complex II). 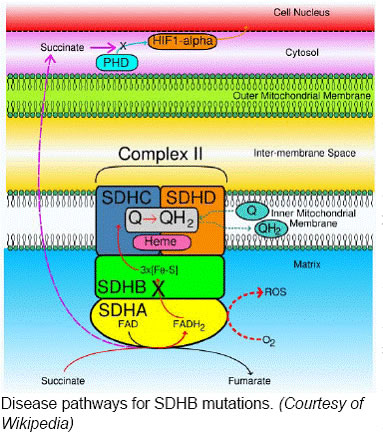 SDH acts as a tumor suppressor gene. Defects in SDH result in a reduction in enzymatic activity. One effect of this is that succinate levels increase. This causes an increase in the levels of HIF1 a (by blocking HIF1 a degradation), an important protein which stimulates the formation of new blood vessels (angiogenesis) and induces other tumor promoting genes. Another effect can be an increase in Reactive Oxygen Species (ROS) such as superoxide.

In 1977, Dr. J. Aidan Carney, a pathologist at the Mayo Clinic, first described Carney’s Triad. Carney’s Triad occurs mostly in younger females. Patients with Carney’s triad may have several different types of tumors including GIST, pulmonary chondroma, and paragangliomas. If any two of these tumors are present, a diagnosis of the “triad” is usually made. In about 2001, Dr. Carney began working with Dr. Constantine Stratakis, a Pediatric Endocrinologist at the National Institute of Health. An important clue was that a few of the “Triad” cases appeared to be familial (run in families). When Carney and Stratakis focused on the familial cases they noted two important differences compared to the rest of the Triad cases. First, the patients in the familial group never had pulmonary chondromas. The second thing that they found was that the familial group had many more males (almost half were males) than the rest of the patients with Carney’s Triad, which had many more females than males. In 2002, Carney and Stratakis published their findings and medicine had a new syndrome. They called this syndrome “Familial Paraganglioma and Gastric Stromal Sarcoma.”

Carney and Stratakis began collaborating with other researchers from France, Italy and the U.S. and together they formed the Carney’s Triad and Carney-Stratakis Dyad Consortium. Focusing on the familial group, the researchers honed in on succinate dehydrogenase, an enzyme known to have mutations in familial forms of paraganglioma. They found what they were looking for. The affected families had germline mutations in either SDHB, SDHC or SDHD; three of the four genes that code for succinate dehydrogenase. These results were recently published in the European Journal of Human Genetics and the New England Journal of Medicine.

The consortium also searched for mutations in the remaining Carney’s Triad patients, but did not find mutations in any of the succinate dehydrogenase genes or in the KIT or PDGFRA genes (frequently mutated in adult GISTs). They did find however, that there were some “secondary” changes in this group; the most frequent change was that tumors had lost 1 of the 2 SDHC genes (had lost one of the two alleles). The importance of this finding has yet to be determined.

These findings were published in the Journal of Clinical Endocrinology & Metabolism in 2007. These findings may lead to new treatment options for the affected families. Some potential candidates include HIF1 a inhibitors (in trials) and deriva tives of a ketoglutarate or dichloroacetate (DCA). The benefits of these type drugs for other pediatric GIST patients, including Carney’s Triad, is less clear.