The first ever clinical trial specifically for the PDGFRA D842V mutation has been announced by Arog pharmaceuticals. The phase II trial is scheduled to open in February, 2011 at Fox Chase Cancer Center in Philadelphia Pennsylvania and at Oregon Health Sciences University in Portland Oregon. The trial will test CP-868,596, a new, very potent inhibitor of the D842V mutation. This trial is listed at Clinicaltrials.gov as NCT01243346. Please see the link for more information. The availability of clinical trials for specific mutations that are completely resistant to Gleevec and Sutent illustrate the critical importance of mutational testing.

NOTE: The text below this line represents the original article as published in the October, 2009 LRG newsletter (which did not include the new trial for CP-868,596). The text above represents the most recent infomation as of January, 2011.

This is the second article in a series discussing mutational status and resistant GIST. In the last article we began with a brief overview and wild-type GIST. In this article we focus on PDGFRA mutations with an emphasis on the imatinib resistant D842V mutation.

In 2005, Drs. Christopher Corless, Michael Heinrich and colleagues reported on the PDGFRA mutational status of 1,105 GIST tumors. In this group, 80 tumors (7.2%) were found to have a PDGFRA mutation. The most common PDGFRA mutation was one that occurs in exon 18, a D842V mutation. D842V mutations are insensitive to Gleevec and Sutent, the two currently approved drugs for GIST.

Patients that are resistant to both Gleevec and Sutent may elect to participate in clinical trials. Many patients (at least in the United States) will try off label treatment with drugs that are approved for other cancers but not for GIST. The two approved KIT inhibitors (other than Gleevec and Sutent) that are the most advanced in trials for GIST are nilotinib (Tasigna) and sorafenib (Nexavar) and patients will often try one of these two drugs after failing Gleevec and Sutent. Both nilotinib and sorafenib, however, have shown limited effectiveness against the D842V mutation in the laboratory.

In 2008, Dr. Maria Debiec-Rychter of the Catholic University of Leuven, Belgium and her colleagues identified two drugs that inhibit the PDGFRA D842V mutation and represent possible treatments for patients with this mutation. Barbara Dewaele was the first author of the paper which was published in Clinical Cancer Research. 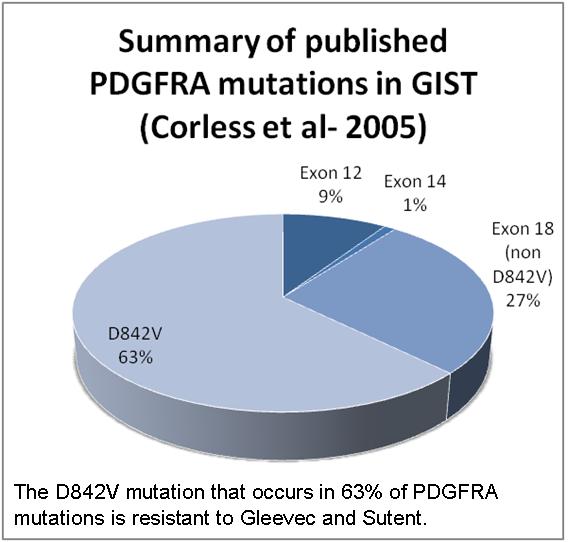 Dasatinib has been extremely effective for Gleevec-resistant chronic myelogenous leukemia (CML) and it is approved for that purpose in the United States and some other countries. Dasatinib is manufactured by Bristol-Myers Squibb and the trade name in America is Sprycel; while in trials, it is/was called BMS- 354825.

After a slow start in phase I trials that included 18 GIST patients, there is some renewed interest in dasatinib for GIST, at least in some unexplored populations, such as the open phase II trial in Switzerland for GIST patients that have never had Gleevec (first-line treatment or “Gleevec-naïve”). Gleevec-resistant GIST patients are also eligible for a phase II trial of dasatinib in advanced sarcomas in the United States.

IPI-504 also effectively inhibited the PDGFRA D842V mutation in the lab by a different mechanism than dasatinib. While dasatinib blocks the PDGFRA signal without damaging the PDGFRA protein, IPI-504 treatment results in the destruction of the PDGFRA protein. IPI- 504 is an HSP90 inhibitor that was in phase III trials for GIST. This trial was terminated in April of 2009 because of a higher than anticipated mortality rate for patients receiving IPI-504. It remains to be seen whether other HSP90 inhibitors in trials will be effective in GIST in general or the D842V mutation in particular.

Several other drugs have also shown some activity in the lab against the D842V mutation or the closely related D816V mutation in KIT. Given the similarity between these two mutations one could speculate that a drug that inhibits one mutation would have a good chance of inhibiting the other. In fact, this has been demonstrated with dasatinib which was shown to inhibit the KIT D816V mutation in 2006 (Shah et al) and PDGFRA D842V in 2008 (Dewaele et al).

Some other drugs that have shown in -vitro activity against the D842V or the KIT D816V mutation and are still in clinical trials are:

Drugs that have shown in-vitro activity against the D816V or D842V mutation but appear to have been withdrawn from development include:

The last few paragraphs illustrate both the promise and the perils of in-vitro testing. It is important to note that only twenty percent of drugs that enter into clinical trials will be approved. They may have unacceptable toxicity, limited effectiveness, or they may be directed against a target that turns out to be less important than it was thought to be.

However, for patients with a D842V mutation entering a clinical trial, in-vitro testing may prove to be the best available determining factor in choosing a drug treatment.