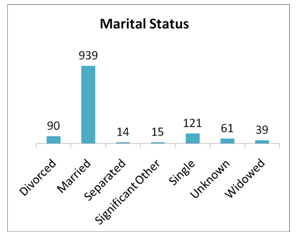 As of December 31, 2010 the Life Raft Group’s Patient Registry has now accounted for 1,279 cases of GIST. The members of this registry have reported their clinical information to us as it pertains to their treatment of GIST. Of these 1,279 cases, we are here to report some key demographics that will help you understand who is a part of Life Raft Group GIST Community. Please note we are not making any assumptions or generalizations on who has a higher likelihood of contracting GIST based on gender, age or marital status. We would simply like to make everyone aware of certain facts in the GIST community. We look forward to reporting more from our registry in future newsletters.

We have found that as of December 31, 2010 that the gender make-up of this registry has only a slightly higher number of men than women (Figure 1). Although the majority of cases that have been reported to us under the age of 35 have a higher population of females, males outnumbered females when looking at patients diagnosed at 35 years of age or older.

The marital status of registry has a predominantly high number of patients who are married (Figure 2). The second largest group of 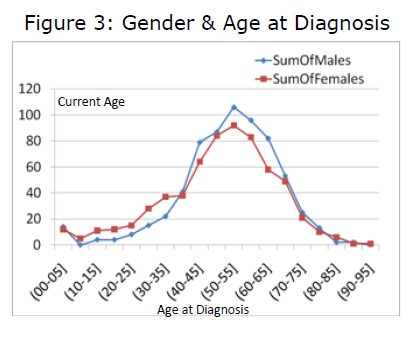 patients is single, and third largest group are divorced. When we observed the age at diagnosis of patients (Figure 3), we have a high number of cases who are between the ages of 50 and 55. There are more men than women who are diagnosed in this age group. The youngest case we have in the registry is seven years old and the oldest case of GIST is 92 .

Although in the previous chart we see that the most cases of GIST occur at age 50 to 55, we see that there are significantly more women being diagnosed under the age of 35 (Figure 4). Women make up 75 percent of cases who are diagnosed between the ages of five and 18, 65 percent of the ages from 18 to 35 and 46 percent diagnosed at age 35 or above. The high percentage of females diagnosed below the age of 18 is typical of pediatric GIST. The number of females diagnosed between the age of 18 and 35 has a ratio of females to males that is between the younger group and the older group. This may represent a mixed patient population containing both pediatric- type GIST and adult-type GIST. 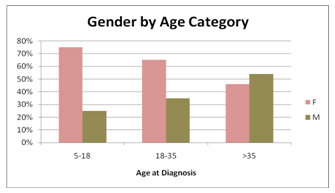