Skip to content
Home/Adjuvant Gleevec, Star of ASCO: What We Learned

Adjuvant Gleevec, Star of ASCO: What We Learned

Adjuvant Gleevec was the star of  ASCO. Here is what we learned from the trip!

Results of the Scandinavian Sarcoma Group (SSG 18) adjuvant imatinib (Gleevec/Glivec) trial in high risk GIST were presented on June 5, during the Plenary Session of the 2011 American Society of Clinical Oncology conference (ASCO). The Plenary or “all members’ session” highlights “abstracts deemed to have the highest merit and greatest impact on oncology research and practice”.

The primary endpoint of the study was to assess recurrence-free survival (RFS) in high-risk GIST (greater than 50 percent estimated risk of disease recurrence) within the first five years following the diagnosis and treatment with adjuvant imatinib for 12 or 36 months. The secondary endpoints included overall survival (OS) and treatment safety.

Four hundred KIT positive GIST patients entered the study. Half were given imatinib for one year and half were given imatinib for three years; the median followup was four and a half years. The five-year RFS was 66 percent for patients in the threeyear group versus 48 percent for those in the oneyear group. Patients assigned to 36 months of imatinib also had longer overall survival.

Five-year OS was 92 percent versus 82 percent. Thirty-six months of adjuvant imatinib compared to 12 months essentially halved the risk of recurrence and death. Joensuu reported that imatinib was generally welltolerated and that the proportion of patients who discontinued imatinib during the assigned treatment period for reasons other than GIST recurrence was 26 percent in the 36-month group and 13 percent in the 12-month group.

Dr. Charles Blanke, one of the four doctors in the first trial of imatinib in GIST (B2222) was the discussant for Dr. Joensuu’s presentation. Dr. Blanke addressed the question of the optimal duration of adjuvant therapy for GIST patients. To examine this question, Dr. Blanke first looked for answers in the metastatic GIST setting. He noted that 35 percent of patients enrolled in the longest running metastatic GIST trial, B2222, are still alive at nine years and then posed the question of whether or not these patients were cured. His conclusion was that “No, they are not (cured)”.

Dr. Blanke presented two slides from the BFR14 trial comparing metastatic GIST patients that either continued imatinib treatment or interrupted imatinib treatment after one, three or five years. In all cases, the patient groups that interrupted treatment rapidly progressed and the groups that continued imatinib had few progressions. The authors of the BFR14 study concluded that even five years of imatinib was not enough in patients with advanced GIST in complete remission and they wondered whether the findings would be the same for adjuvant use.

In his presentation, Dr. Blanke next talked about previously published results from the Z9001 trial that compared one year of adjuvant 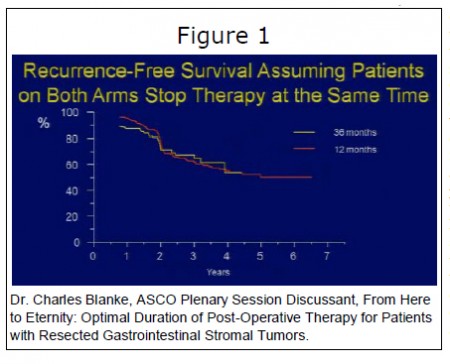 imatinib to placebo. In that trial, there were very few recurrences while on active treatment, but once patients stopped imatinib, recurrences quickly started to occur with a recurrence rate that was similar to the placebo arm. He then showed both the recurrence free survival slide and a slide that had been altered to show the recurrence curves of the SSG 18 trial, so that both curves started at the point of imatinib discontinuation (the three year curve was shifted to the left), see Figure 1. Just like in the metastatic trial (BFR14), the Z9001 adjuvant trial, patients starting relapsing (having a recurrence) six to 12 months after stopping imatinib.

So the question Dr. Blanke posed was, “Is a three-year treatment duration (versus one year) delaying recurrence two years longer without increasing cure rates?” According to Blanke, “To derive the best interval, we would still need to test multiple possible durations. Of course economic issues and factors related to numbers of patients available . . . limit the feasibility of doing so. In fact, the NCI (National Cancer Institute) rejected the five versus 10 year versus lifelong imatinib trial that was recently proposed.

“Do relapses still occur in patients that have responded to imatinib for over five years? 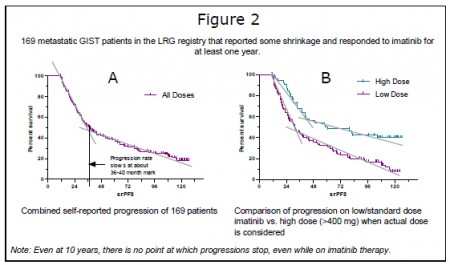 We have heard speculation that perhaps patients reach a plateau at which they no longer have progressions and that this might suggest a cure. Both longterm data from the B2222 trial and internal LRG data suggest that although the rate of progressions may slow, it does not stop. The LRG data supporting this is shown in Figure 2. In Figure 2A, the progression rate of all 169 patients in our study appeared to slow starting at about the three year mark, but progressions still continued, even at the ten year mark. The data presented for the B2222 trial used a different method (the LifeTable Method) and had different patient characteristics (it included a more diverse patient group). When divided into two year progression time points, progression in this group slowed significantly for patients with greater than six years of treatment. Using a similar method, the LRG patients also showed fewer progressions beyond the six year mark, although not as low as the B2222 data.

1. “Can we administer imatinib for prolonged periods in the adjuvant setting?”

He concluded that “the high dropout rate on the three year arm of SSG 18 may have strong implications for the ability to give imatinib for even longer intervals.” (i.e. longer than 36 months)

2. “Who should receive adjuvant imatinib?”

Dr. Blanke pointed out that historically the high risk category was very broad and included patients with 34 percent to nearly 100 percent risk of recurrence.1 Instead of these broad categories, GIST oncologists currently combine risk factors and give each patient a numerical chance of recurrence.

Dr. Blanke pointed to the subset analysis in the study. In the subset analysis patients were divided into lower and higher risk groups based on known risk factors such as mitotic rate and tumor size, lower than 10 mitoses versus greater than 10 mitoses per 50 high powered fields (HPF) and less than 10 cm versus greater than 10 cm. The results showed that in all categories, patients on 36 month adjuvant imatinib had lower risk of recurrence. As Dr. Blanke explained, this meant that all risk levels in the study would benefit, “We could thus theoretically apply the trial results to all patients with a one in three or greater chance of recurrence. But should we?”

After answering the next question he would come back to that issue.

The subset analysis also showed that patients with either exon 11 or mitotic counts higher than 10 per 50 HPF did even better on 36 months adjuvant imatinib. At the same time patients with exon 9, wild type and other mutations had benefit but these that were not significant when compared to patients with the same mutation status on 12 months of therapy.

3. “What is the ideal duration for post–operative Gleevec therapy?”

He then came back to the second question.

“But given the possibility we need to treat for a very long time, coupled with the difficulty patients have taking long duration drug, I probably will recommend adjuvant therapy for those with a 50 percent or greater chance or recurrence following surgery alone. I suspect many of you will choose a lower number.”

Q & A with the man behind the presentation

We asked Dr. Heikki Joensuu about the SSG 18 trial results.

Life Raft Group: Did the magnitude of the survival results surprise you?

Dr. Heikki Joensuu: Regarding recurrence-free survival (RFS) and the drop-out rate, the results turned out to be almost exactly what we anticipated when we planned the trial. We expected a hazard ratio of 0.44 for RFS, and it turned out to be 0.46. We anticipated the drop-out rate to be 20 percent, and it turned out that 13 percent of the patients in the 12-month group discontinued imatinib early due to another reason than GIST recurrence, and 26 percent in the three-year group.

I considered finding a significant difference in overall survival possible, and this was the analysis I was waiting for most anxiously. We were very delighted to learn that the overall survival figures were high in both groups. Since only few patients died, the estimate for the size of the survival benefit is not very accurate. In other words, the survival benefit is there but we cannot yet be sure how big it is.

LRG: Would you care to offer some speculation about why adjuvant therapy might improve survival compared to just treating at recurrence?

Joensuu: It often makes a lot of sense to treat cancer early when the tumor volume is still small. Small volume disease is easier to eradicate than large volume cancer. Some scientists believe that GIST metastases contain stem cells that cannot be eradicated with imatinib and that these cells will give rise to a new colony of cancer cells when imatinib administration is interrupted. This may not be the case when the tumor bulk is small, as is the case in the adjuvant setting.

New mutations that make GIST resistant to drugs may arise somewhat randomly at those sites of the cancer cell genome that are most vulnerable and that are functionally most active. When the tumor burden is large there are a lot of cancer cells around, each of which can generate a drug resistance mutation. When imatinib is administered soon after clinically complete surgery there are only few (or no) GIST cells left behind and it will thus likely take a long time for a drug resistance mutation to emerge or perhaps it will never emerge.

We should not be too pessimistic about novel ways to treat cancer without first testing them. A classic example is tamoxifen that cannot cure anybody who has metastatic breast cancer, but when it is given soon after breast surgery before overt metastases have appeared, permanent cures are frequent. GIST is very different from breast cancer and imatinib is different from tamoxifen, but there may still be some analogy here.