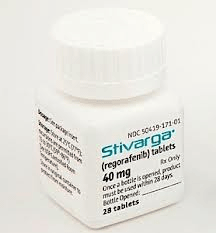 Stivarga comes in 40 mg tablets. Once opened, it must be used within 28 days. Stivarga must be stored in the bottle that it comes in, the desiccant must remain in the bottle; keep bottle tightly sealed. Do not store in a daily or weekly pill box.

Bayer’s Stivarga (regofarenib)  is a new drug that that is approved for GIST in the United States for third-line treatment when Gleevec and Sutent are no longer working.

The three primary side effects of Stivarga reported in a clinical trial were hand foot syndrome, hypertension and diarrhea.

Hypertension was the second primary side effect of Stivarga, with 30 to 59% of patients developing high blood pressure. This is a side effect that needs to be treated and monitored closely by your doctor.

Diarrhea was reported by 40% of participants in the clinical trial.

Other side effects include:

Rare, but serious side effects of Stivarga include:

Stivarga can affect a number of lab tests. In most cases this effect is not severe (less than Grade 3). The percentage of patients having any grade of these abnormalities in the phase III GIST trial (GRID trial) is reported in parentheses below. For full results, including percentages of more serious abnormalities, see the FDA prescribing information.