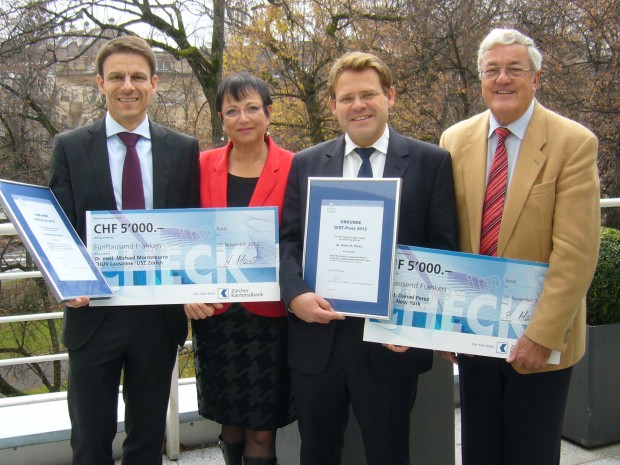 The presentation was given by Dr. Urs Metzger, Chairman of the Awards Committee of the GIST Group.

The association for the support of people affected by gastrointestinal stromal tumors (GIST), the GIST Group of Switzerland has awarded its science prize for the third time. The 2012 GIST Prize, worth 10,000 francs, is shared equally by Dr. Daniel Perez for his study “Blood Neutrophil-to-Lymphocyte Ratio is Prognostic in Gastrointestinal Stromal Tumor”, published in the Annals of Surgical Oncology and Dr. Michael Montemurro for his study “Sorafenib as third or fourth-line treatment of advanced gastrointestinal stromal tumor and pretreatment including both imatinib and sunitinib, and nilotinib. A retrospective analysis”, published in the European Journal of Cancer. The award ceremony took place on November 22 at the semi-annual meeting of the Swiss Group for Clinical Cancer Research (SAKK) in Basel.

The jury reached this unanimous decision under the chairmanship of Dr. Urs Metzger.

The study by Dr. Perez was designed to establish whether the ratio of neutrophil granulocytes and lymphocytes in the blood circulation (NLR) is prognostic for GIST. It is a readily available method for measuring the degree of immunological activity in the blood.

To this end, a prospective analysis was conducted on the blood values of 339 patients with primary, localized GIST, who were treated at MSKCC from 1995 to 2010. Patients following adjuvant imatinib therapy (n=64) were excluded from the study. The NLR was correlated with the clinical course.

Progression-free survival was significantly longer in GIST patients with a low NLR. A correlation was likewise observed between NLR and the number of mitoses and between NLR and tumor size. Only a small number of neutrophil granulocytes were detected in the tumor tissue.

In summary, it can be said that high-risk GIST patients have a high NLR. The elevated NLR values are a parameter for systemic tumor-induced inflammation.

Dr. Montemurro and colleagues undertook a retrospective analysis of the efficacy of sorafenib (Nexavar) in the treatment of patients with a previously treated gastrointestinal stromal tumor based on data from 13 cancer centers. All 124 patients in this largest series worldwide had previously been treated with imatinib (Gleevec) and sunitinib (Sutent), and 68 patients had also been treated with nilotinib (Tasigna). The prior treatments were ended in most cases because of tumor progression and there was therefore an urgent need for treatment in these patients.

Sorafenib was started at twice daily doses of 400 mg. This dose regimen led to mild side-effects in most cases. Frequent side-effects were skin reactions (38%), tiredness and diarrhea.

A response to sorafenib was seen in 10 percent of patients and a stabilization of the disease in 57 percent. The median duration of treatment was 4.5 months, median progression-free survival (PFS) 6.4 months and overall survival 13.5 months. The survival data for sorafenib were identical for the third and fourth line of therapy. An interesting observation was the trend towards a longer PFS in patients in whom the sorafenib dose was reduced or in whom a skin reaction occurred.

Besides the indisputable quality of the work submitted, the jury was also impressed by the engagement of Dr. Montemurro in this rare disease. In the last five years he has given over 40 lectures on the subject of GIST and published nine studies listed in Medline on the subject, either as author or co-author, five of which are original studies.

The Swiss Group for Clinical Cancer Research (SAKK) is a non-profit organization that has carried out clinical cancer studies as a cooperative group since 1965. The aim of SAKK is to develop existing cancer treatments further and to investigate the efficacy and tolerability of new treatments.