Skip to content
Home/Jim Mills shares his journey with GIST 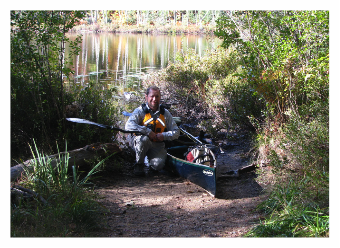 In 2006, GIST patient Jim Mills was generous enough to share his GIST journey to the Life Raft Group. As an avid hiker from the state of Michigan, the then 46-year-old would often spend his free time on the lengthy trails enveloping Lake Superior to stay in shape and make a catalog of adventures. During one morning in May of 2004, halfway down the 46-mile hike of the Pictured Rocks Lakeshore trail, Mills began to feel a gradually increasing discomfort in his abdomen.

“It felt as if I had taken a blow to my stomach, so I decided that I must have injured myself over a tree trunk,” claimed Mills.

Determined to finish the elongated trail, Mills continued his hike and finished the trail in less than 56 hours. The pain grew more severe with each mile he trekked. Unfortunately, this pain was more than mere physical injury.

“The final seven miles were a miserable, uncomfortable experience and by the time I walked out of the woods, my feet were well blistered and I was holding my right hand over my abdomen.”

It wasn’t until late September when Mills decided to visit his family doctor to diagnose his condition. Through numerous specialized doctors and various tests, it was discovered that he had a “tumor of unknown origin.”

It was later identified as a 17x18cm GIST located in the back side of his stomach. In October of the same year, Mills received surgery to have the GIST removed along with his gall bladder and appendix. Despite the successful surgery, Mills displayed a small amount of shock of the tumor given his otherwise healthy condition due to his affinity for exercise.

“It was amazing that I never noticed anything except a slight bulge in my upper abdomen that I unsuccessfully fighting for years with sit-ups and abdominal crunches.”

One year later, Mills was adamant to head back to Pictured Rocks as sort of a commemoration to the time he overcame the rare cancer. The hike helped regain the confidence in his physical well-being that he had lost since his surgery. As a result, Mills made plans to return to his hiking adventures full-time and find new trails to conquer.

Now in his 50s, Mills is still GIST free and enjoying the flora and fauna of hiking, leaving his memories of Pictured Rocks behind to create new experiences elsewhere.

“I hiked the more scenic mid-section of [Pictured Rocks] several more times,” said Mills. “It got so that I was recognizing rocks and roots that I’d tripped over previously. I needed another place to hike.”

One of those newer trails was Fox River Pathway, a 30-mile trail renowned as the location where famous author Ernest Hemingway fished for trout, inspiring him to write the 1925 short story, “Big Two-Hearted River.” Mills labeled the hike as very satisfying and the quietest and least used trails he had ever been on.

“I didn’t see a single person from the moment I was dropped off at the head of the trail next to Lake Superior until two days later,” said Mills.

An additional location Mills discovered was Isle Royale National Park, a large island in Lake Superior, now considered his favorite place to traverse. In 2010 and 2011, Mills took an indirect series of paths about 62-70 miles from one end of the island to the other. He has most recently returned to Isle Royale to enjoy the aquatic aspect of the park, taking his boat and spending time paddling, fishing, and portaging from the waters of Michigan’s largest Great Lake.

Jim Mills has lived a healthy life following the removal of his GIST in 2004, but as a supportive member of The Life Raft Group community he understands that he is in the minority in that regard. For several years, Mills has attended a number of GIST support group meetings in his local area where people talk about their latest issues with the cancer and how they’re dealing with not only its unpleasant ramifications, but also the taxing experiences of GIST-centric medications such as Gleevec and Sutent. For someone who has been GIST free for over nine years without having to take medication, Mills felt slightly overwhelmed.

“Sometimes I hated going because it was depressing,” stated Mills. “Members died, members got new GIST tumors, medication is no longer working, and people are under a lot of physical and mental stress. I’m the one person who is always doing ‘great.’”

Although Mills’ reluctance is understandable, if we’ve learned anything from success it is that it should be used as a guiding light rather than a black hole, regardless of the situation. Jim Mills’ successful journey of battling and conquering GIST creates a ray of hope for all GIST patients across the world. We at The Life Raft Group commend Jim Mills on his achievements and look forward to hearing similar stories from other GIST survivors.