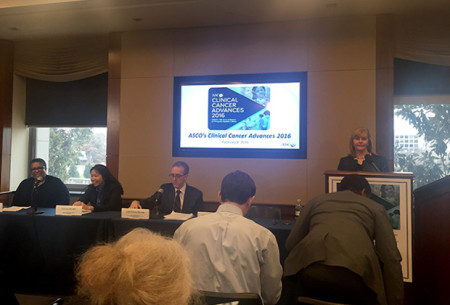 On February 4, 2016, Life Raft Group member Noha Hussein attended the American Society of Clinical Oncology’s (ASCO) Capitol Hill Briefing on their report, “Clinical Cancer Advances 2016,” in Washington, DC at the Rayburn House Office Building. The following is her summary of the meeting.

Dr. Jedd Wochok from Memorial Sloan Kettering Cancer Center presented an example of immunotherapy used to fight melanoma (and also used to manage other kinds of cancer, including: lung, kidney, bladder, liver, head and neck, and Hodgkin’s lymphoma). Breakthroughs in immunotherapy have achieved great results recently, including significant tumor shrinkage and controlled tumor growth for much longer periods of time. Immunotherapy is part of the treatment prescribed for former President Carter.

Dr. Liu presented an example of advances in targeted therapy (similar to Gleevec and other meds used to fight GIST) for ovarian cancer. A phase-II study of targeted therapies Olapanib and Cediranib, when combined, were shown to show significantly delay tumor growth and decrease tumor size.

Key to those advancements have been significant investments in the National Institutes of Health (NIH) and National Cancer Institute (NCI) over the past decades. The Federal government has been invaluable in this support.

Congressman Chuck Fleischmann (TN) spoke of his commitment to fighting cancer throughout his three terms in Congress and how Congress fought to provide $264 million in funding for the NCI. Both his parents died from cancer. He encouraged us to reach out to our senators and representatives to push for more funding, as dollars become more scarce for this non-partisan fight.

Representative Rosa DeLauro (CT) is a 30-year survivor of ovarian cancer who serves on the Labor, Health and Human Services, and Education Subcommittee. She is very passionate about the issue and pointed out that today’s NIH budget is lower than it was 2003, once we adjust for inflation and the increasing costs of biomedical research. She spoke about Vice President Joe Biden’s cancer “moonshot” mission and the internal push to find funding resources to advance progress against cancer.

Wanda Lucas, a patient advocate and survivor of breast cancer, discussed the importance of taking part in clinical trials and the continued need for increases in funding research.

Julie Vose closed the meeting by speaking more about the report and continued to stress the importance of Federal funding to advance work on the prevention of and fight against metastasis.

The room was packed; the briefing was interesting; and I liked how all the speakers gave short, informative speeches without belaboring medical information. Few questions followed the presentations, but the message came across loud and clear: Federal funding is essential for the fight against cancer and the advancement of biomedical research like immunotherapy and targeted therapies.

A webcast of the briefing is now available at bit.ly/ASCO2016HillBriefing

Are you interested in being more involved with advocacy events? If so, contact Laura Occhiuzzi at locchiuzzi@liferaftgroup.org