Skip to content
Home/Leading GIST Experts Weigh in at ESMO

On behalf of The Life Raft Group USA and Life Raft Group Canada, I attended the Sarcoma & GIST 2016 meeting organized by the European Society for Medical Oncology (ESMO) in Milan, Italy, in February.

There were 369 participants at the meeting, most of whom were medical oncologists. Several GIST patient-group representatives also attended, including GIST advocates Gabriella Tedone and Anna Costato, from Italy; Markus Wartenberg, from Germany; Helga Meier, from Switzerland and myself. Participants came from 41 countries — mostly from western Europe, but also included many speakers from the U.S.

Meeting sessions were split about 50/50 between GIST and soft-tissue sarcoma (STS). Progress in understanding and treating GIST has been so remarkable that the theme of many of the STS talks was: “How can we build on the GIST model?” Sadly, there are few options for most metastatic STS, mainly the old-style cytotoxic chemotherapy drugs.

This article is not a comprehensive account of the meeting, but will cover a few of the highlights from my point of view — focusing on GIST and not on STS.

On the Monday before the main meeting, I attended the “preceptorship,” an all-day session where senior doctors gave an introduction to GIST and STS, aimed at young medical oncologists.

Dr. Paolo Dei Tos, from Treviso, Italy, talked about the pathology of GIST. As long ago as 1962, U.S. pathologist Arthur Purdy Stout, in a paper titled “Bizarre Smooth Muscle Tumors of the Stomach,” first recognized the tumors now known as GIST, even though he called them “leiomyoblastomas.” Stout made this classification on the basis of clinical presentation and pathology. Today, according to Dr. Dei Tos, morphology is less relevant to the diagnosis of GIST. It is essential to do immunohistochemistry (staining) analysis for the KIT and DOG1 proteins that are characteristic of GIST.

During the Q&A period, another doctor asked him about the relevance of the distinction between benign and malignant GIST. Can we ever talk about a benign GIST? Dr. Dei Tos answered that 99 percent of small “micro-GISTs” do not progress. Nevertheless, even a patient with a small GIST has a small risk of metastasis. Therefore, we should probably not call any GIST benign.

Maria Debiec-Rychter, a member of the Life Raft Group Research Team from Leuven, Belgium, presented “The molecular biology of GIST.” She began by noting that 75 percent of GIST patients’ tumors have a mutation in the KIT gene and 15 percent have a mutation in the PDGFRA gene. She said that at their registry in Leuven, 1,862 GIST patients have been characterized by mutational testing. She believes that mutational analysis should be standard clinical practice in GIST.

She also discussed wildtype GIST, which does not have KIT or PDGFRA mutations. She used this scheme of Boikos and Stratakis to review the recent progress in classifying these tumors: (see figure 1 ) 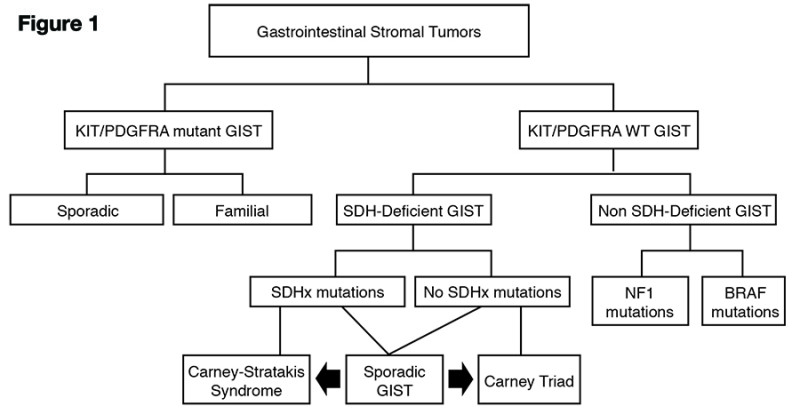 Carney-Stratakis syndrome is associated with germline (inherited) mutations in succinate dehydrogenase (SDH) genes. In these GIST cases, genetic counseling is needed for the family.

Dr. Heikki Joensuu, a pioneer of imatinib therapy for GIST from Finland, spoke about adjuvant therapy. He reviewed the randomized trials of adjuvant imatinib in GIST (ACOSOG Z9001; EORTC 62024; and SSG XVIII), noting that doctors tend to underestimate the risk of recurrence for many GIST patients. Two ongoing clinical trials are testing whether taking adjuvant imatinib for longer than three years is effective in preventing recurrence. Dr. Joensuu said that he titrates the imatinib dose up to what each patient can tolerate, such as 500, 600, or 700 mg, rather than using the same dose for every patient.

Dr. Peter Reichardt, from Berlin, discussed targeted therapy of metastatic GIST. He reviewed of the early days of imatinib therapy for GIST and discussed alternatives for the treatment of wildtype GIST. During the Q&A period, Dr. Mikael Eriksson of Sweden asked: “Do you think it is ethical to use a placebo control in a trial of a new drug?” Dr. Reichardt answered that he thought it could be justified in order to get a new drug approved more quickly. Dr. Eriksson responded: “No, it is not ethical, because we already know what will happen to patients on a placebo.”

The main conference began on Tuesday. Markus Wartenberg was one of the people invited to the stage to welcome the delegates, and he spoke eloquently on behalf of Sarcoma Patients EuroNet (SPAEN;
www.sarcoma-patients.eu). He presented a model in which Patient Advocacy Groups can act as an interface between patients and caregivers on one side; and on the other, between doctors, research organizations, regulatory agencies and drug companies. I was happy to observe the very positive and respectful way in which ESMO and the medical community interacted with the patient advocates throughout the meeting.

Dr. George Demetri (Dana Farber Cancer Institute, Boston), another pioneer of imatinib therapy, discussed the medical treatment of GIST. Interestingly, he made the point that “Patient Zero,” the female patient who was the subject of the 2002 New England Journal of Medicine report that first announced the efficacy of imatinib in GIST, was actually treated according to a formally written and committee-approved clinical trial protocol. It was not just a one-shot trial, as some people may think. He stressed that 15 percent  from this very first group are long-term survivors, who have been treated with imatinib since approximately 2001. With regard to adjuvant imatinib, he asked provocatively: “Why would a young person who has a high-risk GIST ever stop adjuvant imatinib?”

Dr. Reichardt then spoke on “The clinical challenge of secondary resistance to imatinib in GIST.” He listed the possible major cause as secondary resistance mutations. Other possible factors include insufficient drug getting to the tumor, over-expression of the KIT target, and loss of KIT expression resulting from “de-differentiation” of the tumor cells.

Dr. Reichardt discussed the situation in which a patient stops adjuvant imatinib, for example, after three years of treatment, He said that patients should be monitored closely after discontinuation, with imaging done every three months. Some outstanding questions that need to be answered with regard to adjuvant imatinib include:

Should treatment continue for longer than three years?

There appears to be no consensus on whether to use 800 mg for adjuvant treatment of exon 9 patients. After this talk, Dr. Trent asked the audience for a show of hands as to whether doctors are prescribing 800 mg. The response was mixed.

Immunotherapy and the search for a cure

On Wednesday, Dr. Robert Maki (Mount Sinai Hospital, New York) spoke on “Immune therapy in STS: Where are we?” He discussed the many new immune-modulation strategies being developed. These include new vaccines, monoclonal antibodies, activated “T-cells,” drugs that can trigger the stimulation of T-cells, and “immune checkpoint inhibitor” drugs that can release a pre-existing but otherwise repressed immune response. His overall conclusion is that he expects to see a plethora of new options for immunotherapy in GIST.

It would have been wonderful if a landmark announcement of the success of a new drug or immunotherapy had been announced at the meeting. Although that did not happen, it was encouraging to see the rapid progress that is being made on the classification and characterization of GIST. GIST can certainly can no longer be regarded as a single disease, but rather a group of several related diseases. Many new developments are being made in drug and biological therapies, such as immunotherapy. I had the satisfying feeling that the whole GIST community shares a spirit of cooperation and dedication to the challenge of treating the disease — ready to share new ideas and experimental systems (like GIST cell lines) and keeping communication channels open.